You are here: Home / News / New Campaign for Motorcycle Helmets to be Worn 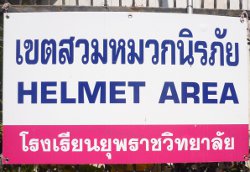 Thailand’s government has today approved a proposal aimed at getting all motorcyclists to wear crash helmets. Although there is an existing law that states that motorcyclists must wear helmets, the law is loosely enforced by police and widely ignored by many motorcyclists.

The new campaign for 2011 is aimed at reducing the number of road casualties in Thailand and it seems that the government is keen that civil servants should lead by example. All state agencies, state enterprises and local administrations are to make it compulsory for their staff to wear safety helmets whilst riding on motorcycles. Violators will face a fine for breaking the law and will also be liable to disciplinary action from their employer. As part of the new scheme, Thailand’s Labour Ministry will instruct all employers to promote the use of helmets. At the same time, the Education Ministry is to run a campaign advising school and college students about the need to wear a helmet when riding on a motorbike.

Any road-safety scheme aimed at saving lives should be applauded, but there will need to be a lot of change in attitudes for it to be a success. It could take a generation for things to change properly because at the moment there are a number of things in Thailand which stand in the way of the success of the new campaign. One of the main obstacles for any road safety campaign in Thailand is the Thai police force. In provincial areas, police officers routinely ride motorcycles without helmets so the example being set isn’t the best to say the least. And, usually at the end of the month, you will see check points set up with the police stopping a selection of the motorcyclists who aren’t wearing helmets. Those stopped usually have the option of paying the fine at the police station for approximately 500 Baht or for a smaller fee of around 200 Baht can pay an on-the-spot fine. The police officer may also be ‘helpful’ enough not to write out a ticket to ‘save on unnecessary paperwork’. The money paid to the police is often referred to as ‘tea money’ and drivers in Thailand know that this is a part of life here. What is also a part of life in Thailand is seeing entire families on one motorcycle and children driving motorbikes to school. This is Thailand (T.I.T.) is a phrase that many expats use to sum up some of the amazing things that you see in Thailand on an everyday basis.

Part of the appeal of visiting Thailand is that the culture and relaxed way of doing things here is so different to many other countries. This also means that there are very different attitudes towards safety in Thailand compared to Western countries.