It was an evening to cherish last night for Thailand’s Saysunee Jana. The 38-year-old from Chiang Mai won the final of her wheelchair fencing event at the Paralympic Games in London. The gold medal caps a memorable week for Saysunee who also had the honour of being the flag-bearer for Thailand at the Opening Ceremony. The motto of Thailand’s Paralympic Committee is, ‘Empower, Achieve, Inspire’ and that is certainly something which this particular lady has done. 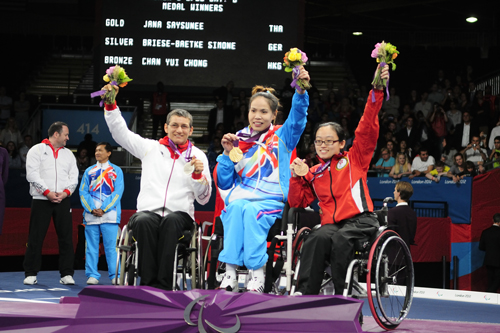 Twenty-one years ago, Saysunee was just like any other Thai youngster on their way to work in the morning rush-hour on the back of a motorbike. Sadly, like many other youngsters on motorbikes in Thailand, she was involved in a road accident. A cracked skull and broken back resulted in her legs being paralysed. The cost of surgery and ongoing medical treatment left Saysunee’s family in debt and Saysunee herself spiralled into deep depression. For more than three years the young woman confined herself to her home, unable to face the outside world. It was when Saysunee was at her lowest point – just after she’d attempted suicide – when the change happened. Saysunee enrolled in a distance-learning course and then attended a government-run institute for disabled people. It was here that Saysunee was encouraged to try different wheelchair sports and it was also here that Saysunee realised that if she could become a successful sports-person, the prize money could help to pay back the debt her family were in as consequence of her medical treatment.

Through her hard-work, dedication and talent, Saysunee has become a world-class athlete and her gold at London 2012 adds to her impressive medal haul from other competitions which already included a gold from the 2004 Paralympic Games in Athens. Saysunee has paid off family debts, bought homes for her family members and supported her sister through university. She has also used her public profile to address the lack of facilities for disabled people in Thailand.

Saysunee Jana is a champion in her sport. Saysunee is also a champion away from the sporting arena. Congratulations Saysunee and thank you.