You are here: Home / News / Thai Authorities Push Ahead With Phuket Clean Up

Regular visitors to Phuket could be forgiven for rolling their eyes when they read stories about another clampdown on the island’s taxi ‘mafia’ and attempts to clean-up the island’s beaches. But the latest campaign on Phuket seems to have teeth and means business. A 14-strong team of police, with backing from the military, have been tasked with tackling corruption on Phuket and clearing away illegal structures including those which have encroached on beaches and National Parks.

Beaches on Phuket are being ‘returned to the people’. Thai authorities have already cleared away illegally built structures on Kamala Beach and this week attention has switched to Patong Beach. Beach chairs and umbrellas which cluttered some stretches of Patong have been removed. The action appears to have won widespread approval from holiday-makers whilst some local residents say the beaches are beginning to look like they did 20 or 30 years ago. Not everybody is happy though. A number of small business owners have complained to police that their livelihood has been ruined by the changes. 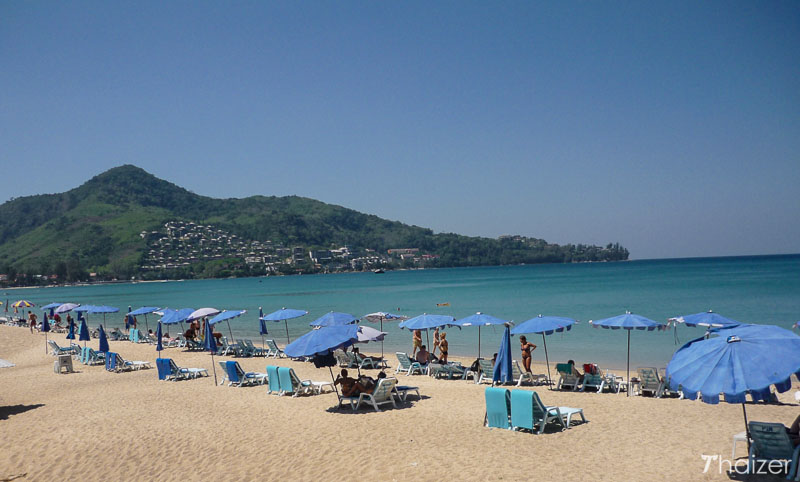 Sunbeds and umbrellas on Kamala Beach, Phuket (photo from 2010)

In the past, there have been many complaints from tourists about unscrupulous taxi drivers on Phuket island. Thai authorities have long known there has been a problem, but it has never been properly addressed. In February, police began an undercover operation to get to the root of the taxi mafia in Phuket. More than 100 suspects have now been identified with some senior Phuket municipality officials already facing prosecution after being implicated in bribes, protection rackets and extortion. Illegal taxi shacks have been torn down and only regulated drivers are being allowed to operate services from Phuket airport. By the end of this month, it is expected that the only taxis operating anywhere in Phuket will be those that are fully licensed and regulated.

The jet ski operators on Phuket have been a regular source of complaints from tourists. According to the governor of Phuket, all jet ski operators (almost 500) in Phuket have now been regulated and are being closely monitored. However, the man in charge of the police operation has hinted that regulation alone may not be the answer and has voiced his opinion that a total ban on jet skis would be his preferred choice.

Will the crackdown last?

The man in charge of the current crackdown in Phuket has been scathing with his criticism of regional officials. Major General Paween said, ‘The problems in Phuket are not hard to solve . . . The authorities are weak and left the issues to fester for a long time. The authorities who take care of this province should be arrested for ignoring their duty.’

The crackdown in Phuket has apparently been in the pipeline for the last two years, but has been finally pushed through with police able to rely on the backing of the military following the recent coup. The ongoing crackdown on Phuket does look set to have a lasting effect, but only time will tell.

There is still an element of confusion with some Phuket beach vendors reporting that different regulations are being applied to different beaches. And whilst the taxis and beaches of Phuket may be subject to a clean up operation, there is no indication yet on whether this will or won’t be extended to other areas of Phuket that have come in for criticism such as Bangla Road in Patong.