You are here: Home / News / The Annual Haze and Smog Problem in North Thailand

For people living in the north of Thailand, the start of the hot season heralds the onset of the summer smog and haze. It’s an annual problem and one which successive Thai governments have failed to solve. The pollution levels from the smog in March 2015 have been at their highest levels in years with the issue making national headlines in Thailand.

The smoke pollution in the north of Thailand usually starts late February or early March as the hot season really kicks in. Some years, the pollution is an issue for a handful of days, whilst other years it can drag on for weeks. The worst of the haze is usually over by early April.

Why does the smoke and haze occur?

The smog in northern Thailand is caused by a combination of factors. The burning of land is the main reason. Slash and burn farming techniques have been common over the centuries in the northern region of Thailand as well as neighbouring Burma and Laos. Some years, the smoke from the fires lingers because of climatic conditions. Lower than usual humidity levels, lack of wind and higher than average summer temperatures can all combine to exacerbate the effects of the pollution. Because of the topography of north Thailand, the mountains tend to hem in the smoke which nestles in the valleys below.

Although legislation is in place to punish people who set fires illegally, the reality is that few people are caught or prosecuted. In years where the haze and smoke is severe, the Thai armed forces are drafted in to help put out some of the forest fires. Cloud seeding is also used under the direction of the Royal Rainmaking Project. 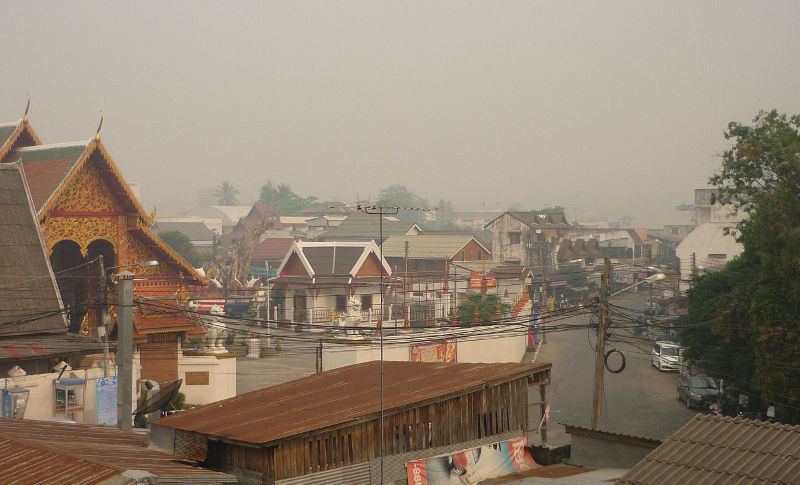 I took both of these photos in the centre of Chiang Rai city near Wat Jet Yod. The top photo was on a bad smog morning, mid-March 2015. Bottom photo was how the scene usually looks with clear views out towards the mountains beyond the city (taken in September 2013).

Where does the smog occur?

The smoke and haze affect numerous provinces in northern Thailand. As the major city in the north, Chiang Mai often makes the headlines during what some expats call the ‘smoky season’. Although the haze is a real problem throughout Chiang Mai province, official statistics over the years show that the pollution is usually more severe in the provinces of Mae Hong Son and Chiang Rai. Other provinces in the north are also affected including, Lampang, Lamphun, Phrae, Phayao and Nan.

On days where the smoke and haze is at its worst, there is the potential for disruption to flights. The small airport at Mae Hong Son is the most susceptible to flight delays or cancellations during the peak of the haze in March. However, there have been occasional days in certain years where flights landing at Chiang Mai have been diverted to Chiang Rai and vice-versa.

Should I still visit northern Thailand in March?

There is no doubt that the haze and smog can be an unpleasant experience for many people. March is a time of the year when hospitals and clinics in northern Thailand report an upsurge in the number of people treated for respiratory problems. Visitors and locals often wear face masks on the worst of the smoky days. Some years are worse than others. March 2007 was particularly poor for air quality, but there were subsequent years where the pollution was limited by the early arrival of summer storms so it’s impossible to predict in advance how bad the smoke pollution will be in any given year.

From a personal perspective, although I enjoy Thailand at any time of the year, March is my least favourite month to travel in the north of Thailand. But that’s not just because of the potential for smog. Mid-late March can be oppressively hot with no breeze, the countryside tends to be at its driest and views aren’t as pretty as usual. All of that said, many tourists do visit the north of Thailand in March and enjoy their time so it will depend on what you want to see and do during your trip. Although I certainly wouldn’t go as far to say don’t visit northern Thailand in March, be prepared for some potentially hazy days.

The Pollution Control Department of Thailand have a useful website to check air quality anywhere in Thailand. The website also links to the free Air4Thai app which is available for Apple and Android devices.