Tens of thousands of Thai people took part in a nationwide cycling rally held yesterday. The event was organised as part of the celebrations for HM Queen Sirikit’s 83rd birthday on August 12. The Thai queen’s birthday is also celebrated as Mother’s Day in Thailand and in recognition of that the cycling event was named ‘Bike for Mom’. With the queen born on a Friday her birth colour is blue and most of the participants in Sunday’s mass cycling rally wore blue in Queen Sirikit’s honour.

The main ‘Bike for Mom’ event was held in Bangkok where a number of streets were closed to traffic with an estimated 40,000 cyclists taking part in the cycle ride in the Thai capital. Starting at 3pm from the Royal Plaza in front of Ananta Samakhom Throne Hall the ride was preceded by a formal ceremony at the Equestrian Statue of King Rama V. From there, the 43km route took riders past a number of prominent Bangkok landmarks before finishing again at the Royal Plaza in the Dusit district of Bangkok. Although the main event was held in the Thai capital, every province in Thailand held a ‘Bike for Mom’ rally with the various events receiving extensive coverage on Thai television networks. 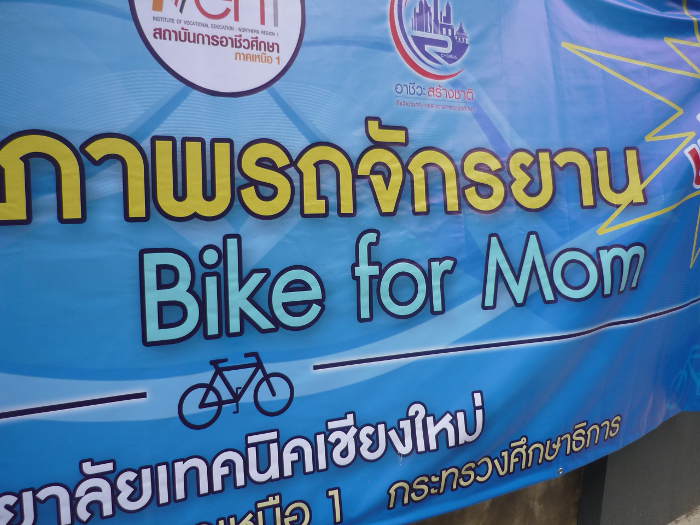 Organisers of the ‘Bike for Mom’ cycle ride were delighted to announce that they broke the world record for the number of people taking part in such an event. The previous mark had been over 76,000 at an event hosted in Taiwan. The actual number of people who registered for the ‘Bike for Mom’ events in Thailand was almost 300,000, but on the day not all of those people met the minimum criteria to be counted towards the record attempt. Despite that, the Guinness World Records committee who were in attendance in Thailand declared that over 146,000 cyclists did meet the requirements and a new world record was established.

With the elderly Thai king and queen suffering from poor health they are rarely seen in public and were not in attendance for any of the public events marking Queen Sirikit’s 83rd birthday. The main ‘Bike for Mom’ event that took place in Bangkok was, significantly, headed by HRH Crown Prince Maha Vajiralongkorn. The 63-year-old Crown Prince is heir to the throne and the symbolism of the weekend’s events won’t be lost on the Thai public that were in attendance or who watched on television. The Crown Prince led the first group of cyclists accompanied by senior members of the military government and key members of the judiciary. This included the man who led the 2014 coup and is currently serving as Thailand’s prime minister, Prayuth Chan-ocha. The second group of cyclists was led by the Crown Prince’s daughter, HRH Princess Bajrakitiyabha. With this second group came heads of various government offices and representatives of the private sector. And the third and final group following the members of royalty and the army, were the general public.

Although the Crown Prince has deputised for his father at a number of formal events in recent years, this informal public appearance showed the Thai public a more approachable side of the heir apparent that they aren’t used to seeing.