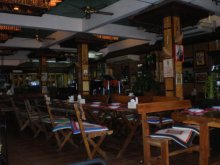 I visited here with my sister having spent some time at the Chiang Rai Hill Tribe Museum which is next door to the restaurant. The restaurant and museum are run by the PDA (Population and Community Development Association). Amongst other projects, the PDA has been at the forefront of family planning in Thailand and has played a key role in promoting the use of condoms and enforcing the safe sex message.

I went to Cabbages & Condoms at a quiet time, around 3 o’clock in the afternoon and apart from my table of two, there were only 5 other people eating there (2 separate groups of Thai businessmen). Although there were more staff than there were customers, it soon became apparent that the staff would rather be serving the businessmen than my table. A long wait for a menu, an unusually long wait for the food and when it did arrive it came without the rice which had also been ordered. Had the restaurant been busy then it would have been more understandable, but this was a quiet afternoon and the lady who served us didn’t even try to hide the fact that she wanted to be somewhere else. Fair enough, we all have our off days and I assume this isn’t the normal level of service, but it was less than impressive.

So the service was poor, but I can forgive that if the food itself is good. Fortunately, the food was very good: fried prawns (kung thawt); chicken and coconut soup (tom khaa kai); whole fish cooked in ginger and chillies (plaa jian). With steamed rice, a large bottle of water and a couple of watermelon shakes the bill was just under 700 Baht. The inside of the restaurant is much bigger than I expected and there is also a small seating area outside too.

Summary
The setting isn’t as picturesque as the Cabbages and Condoms restaurant in Bangkok, but it’s not bad. The food was very good and the service (on this particular day) was poor. If you are in Chiang Rai, I recommend a visit as the food is worth it and the money goes towards a good cause.