Last week I flew back to Bangkok using Emirates. I’ve used Emirates before and always been impressed with their service. Unfortunately, this time round things didn’t go according to plan and I arrived in Bangkok 13 hours later than scheduled. When you travel a lot, you will encounter these hiccups and the mark of a good airline is how they deal with it. In that respect, Emirates did quite well in difficult circumstances. I was tired and grumpy at the time, but looking back on the experience Emirates did well.

I’d checked in online to save time and hassle, but when I arrived at the online check-in desk I was told of the three hour delay in departure. This meant I would miss my scheduled connection in Dubai. Emirates re-booked me on to the next available connecting service to Bangkok which meant a 13-hour wait at Dubai. I had some sympathy for the lady at the check-in desk who was clearly under pressure from some irate passengers. I was given a refreshment voucher to use at Heathrow for the value of 8GBP but was told I would have to contact the Emirates customer service desk to confirm arrangements in Dubai. The Emirates customer service staff advised me that I would be given complimentary hotel accommodation in Dubai because of the length of the delay.

This sector of the flight was on the world’s largest passenger plane, the Airbus A380. It’s certainly a big beast, but unless you’re a plane spotter or you’re lucky enough to be in the expensive seats on the upper deck, it’s a novelty that soon wears off. Economy seats are comparable to Etihad Airlines in terms of pitch and leg-room although I would say there was a better choice of in-flight entertainment with Emirates compared to Etihad. The food was very good and the on-board service was efficient. 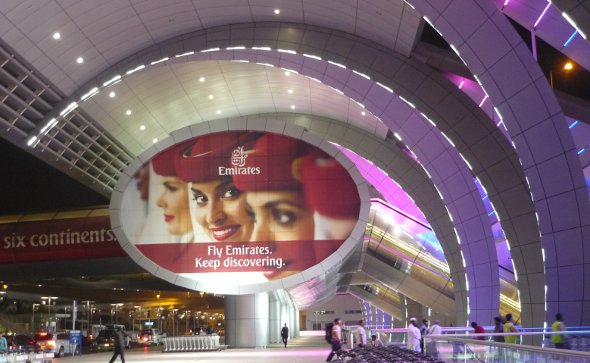 Dubai airport is still as sleek and modern as I remembered it, but I wasn’t looking forward to the unscheduled 13-hour wait. Considering there were so many people with missed connections, I felt the Emirates staff at Dubai could have been more forthcoming in directing people to the correct desks and organising the queues. That’s just a minor gripe and the people I really felt sorry for were those travelling with young children who had missed connections. With no chance of getting an earlier flight to Bangkok (all full) I was given a free hotel voucher for the Copthorne Hotel and directed to the complimentary shuttle-bus.

The hotel check-in process was smooth and I was handed complimentary food and drinks vouchers to use during my stay there. It’s obviously not the first time this has happened, but it’s good to know that the contingency plans put in place by Emirates worked smoothly.

The second leg of the journey to Bangkok was on a Boeing 777 which was probably less than three-quarters full. As with the first leg of the journey, the food and service on this leg was good with the added bonus of a surprisingly delicious Penang Curry.

Flight delays happen and they aren’t always the fault of the airline. They are annoying when they do happen, but in this instance Emirates did more or less everything I could have expected them to do to make things right. Although it was a much longer and more tiring journey, it wouldn’t stop me from flying with Emirates again in the future.