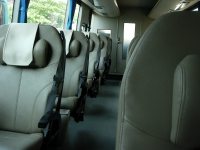 There are numerous buses which ply the route between Chiang Mai and Chiang Rai, with varying prices according to the degree of comfort, speed and number of stops en route. The cheapest service has fans instead of air-conditioning, stops numerous times and is quite slow. At the other end of the spectrum, the VIP bus is a bit like flying business class.

I used the Green Bus Company’s VIP service for the grand total of *263 Baht for a one-way journey between Chiang Mai and Chiang Rai. The bus is a sleek, silver, 24-seater, with twin seats down one side of the aisle and single seats down the other side (see photo). On purchasing your bus ticket, you are given an allocated seat with seat number as you are on a plane. The reclining seats are all leather and have an adjustable headrest and a footrest. All seats are fitted with seat-belts. The windows are large and afford great views of the mountains and countryside.

A stewardess service operates on board and hands out water, a snack and cleansing towels. All this is included in the price of your ticket. Before you depart there is some middle-of-the-road Western music of the Westlife/Ronan Keating variety to keep you entertained. Once the bus gets going, the music is replaced by overhead DVD screens featuring a popular Thai sitcom. Even if you don’t understand Thai, the volume is quiet enough not to disturb you.

The toilet at the back of the bus was small, but clean. One thing I’ve discovered is that using the toilet on a mountain road is quite hazardous! Gentlemen, I advise you to replace your normal stand and point technique with the sit down option.

Why didn’t I get an ordinary bus and interact with the Thai people I hear you ask. Well, it’s the middle of the hot season, the aircon is welcome, the seats are exceptionally comfortable and on both legs of my journey, most of the passengers were Thai.

Buses depart from Chiang Mai’s Arcade Bus Station. I didn’t pre-book tickets although that is an option with the computerised booking system and is advisable over busy periods like Songkran and other holidays. The frequency is quite regular and journey time is 3 hours.

In response to a number of requests from readers, I’ve listed the times below from the current copy (September 2011) of the Green Bus Timetable. Please note these are just the times for the Green Bus Company and alternative services are available from different bus operators.

Buying Tickets in advance
Tickets can be purchased in advance at Chiang Mai’s new Arcade Bus Station. There is also the option to buy tickets from any official Green Bus ticket office in Chiang Mai (booking fee is 20 Baht). I’ve used the office in the Old Town which has now moved to Inthawarorot Road in between De Lanna Hotel and the Amphur District Office, but other outlets are available in the city including a location at the Night Bazaar.

In Chiang Rai, tickets can be purchased in advance from either of the two bus terminals.

Review: Wiang Inn Hotel, Chiang Rai
Next Post: How to Get from Bangkok Airport to Pattaya