You are here: Home / Reviews / Book Review: Catching the Sun by Tony Parsons 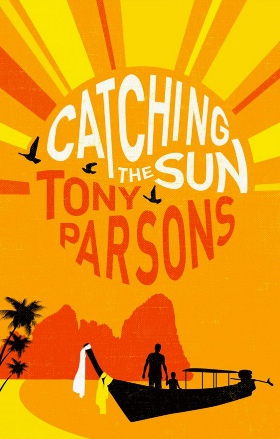 I first became aware of ‘Catching the Sun’ after watching the author being interviewed on BBC World. During that interview, Tony Parsons described his latest novel as a ‘love letter to Thailand’, but did the book live up to that description?

Tom Finn has long been disillusioned with life in London, but it is a traumatic burglary at his home which proves to be the final tipping point. Offered a job in Thailand, Finn makes the decision to move to Phuket with his wife and two children. Initially, Phuket seems to offer the Finn family everything that their lives in England didn’t, but the likeable main character has the unenviable talent of falling foul of the law; in England and Thailand. The property company that Tom Finn is employed by in Phuket is illegal and a short spell in a Thai prison is just the start of Finn’s harsh introduction to the realities of his new life in Thailand. His minor role in the company sees him escape serious punishment, but with no work his future in Phuket looks to be short-lived and with his wife telling him, ‘you bring so much trouble to this family’, the decision to move to Thailand looks to be another mistake by Tom. With the help of their Thai neighbours, the Finn family gradually begin to find their feet on the Andaman island, but the fall-out from the dodgy dealings of the property company continue to impact on the expat family. This is all compounded by the Thai police sergeant who has taken a dislike to Tom and tells him ‘just go home’. But where is home for Tom? He left his life in England behind. Thailand was his home now. For the sake of his family he has to prove that it was the right decision to move to Phuket.

When writing about Thailand it’s all too easy to drift into lazy stereotypes of ladyboys, commercial sex, old and fat Westerners with young and slim Thai brides . . . blah, blah, blah. Although Parsons doesn’t completely shy away from some of these subjects, for the most part he does it skilfully and with balance and perspective. It’s clear that the author has a fondness for Thailand and Thai culture, but he’s also well beyond the rose-tinted spectacles stage of knowing the country. Some of the characters that the author describes in Phuket may seem unlikely, but they stack up well with some of the more colourful expats I’ve met in the flesh in Thailand. Parsons also writes poignantly about the tsunami and delightfully describes some of the Thai festivals including Loy Krathong and Songkran. Less obviously, he picks up on some more subtle aspects of Thai culture such as the ‘sniff kiss’.

On the negative side, I was surprised with some of the Thai language used in the book. Getting the Thai words for island (ko) and bay (ao) mixed up when talking about Patong and Surin was disappointing, especially when it happened so early on in the book. There were also a few other instances of Thai language use that I’d call into question even allowing for the context and the characters in the story. However, it would be churlish to dwell on these slight downsides when so much of the book is wonderfully written.

is a book I’d highly recommend to anybody and not just those with an interest in Thailand. I think the author’s description of a ‘love letter to Thailand’ is a fair one and he delivers a very enjoyable read. The story is a simple one, but moves along at a decent pace and the book is full of well-observed depictions of family life and traditional values.

I bought this book via Amazon and downloaded the Kindle version.
Catching the Sun (UK store)