Samlors and Cycles: On The Trail of Chiang Mai’s Hidden Heritage

Chiang Mai is a city with so much to see and do. Whether it’s ancient temples, ethical elephant experiences or adrenaline-filled adventure, there is no shortage of activities in the city known as the ‘Rose of the North’. A walk around Chiang Mai’s Old City area will soon reveal a host of historic sites including Wat Chedi Luang and Wat Phra Singh. And for anybody who wants to delve a little deeper into Chiang Mai’s past there are some fascinating stories waiting to be discovered about the first foreigners who came to live and work in north Thailand. Amongst those adventurous travellers there were some remarkable individuals whose legacy lives on in a number of locations in and around Chiang Mai.

Over the years, I’ve spent a lot of time in Chiang Mai. It’s a city that is close to my heart and one which will always be special to me. I like to think I have a good knowledge of Chiang Mai, but what I know about the city’s history pales in comparison to my friend, Frans Betgem, a passionate historian and long-time resident of the city. Frans runs Green Trails, a company which specialises in responsible tours in Chiang Mai and north Thailand. He is also the man behind the informative Facebook group, Chiang Mai Memories. Frans invited me to join him on a new tour he was trialling and it proved to be an extremely enjoyable day out. Our small group travelled with the veteran samlor drivers of Chiang Mai before jumping on a bicycle to ride through some outlying areas of the city, including the beautiful grounds of McKean Hospital and Wiang Kum Kam. These are some of the highlights of this delightful one day tour. 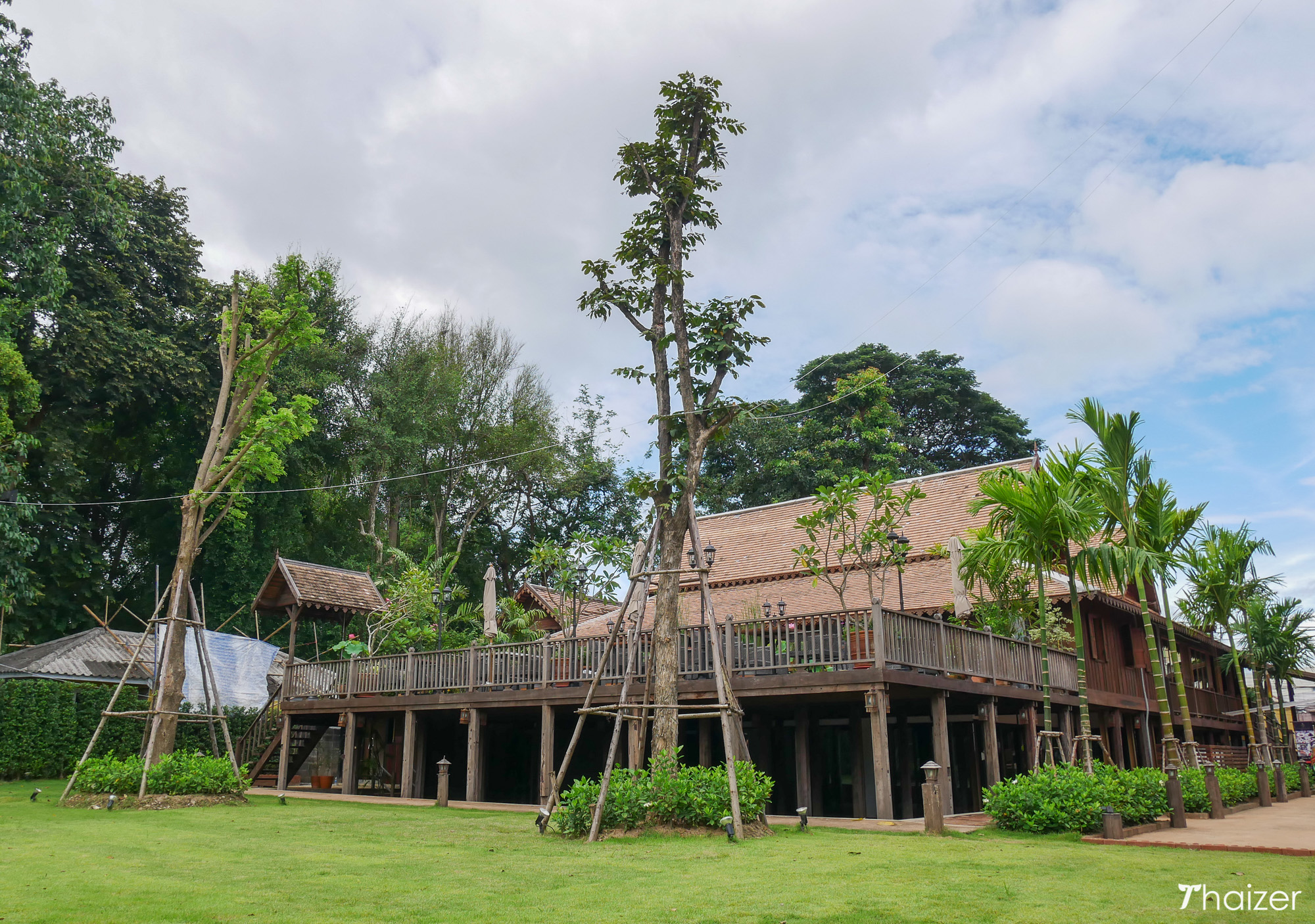 Meeting the samlor drivers at Wat Loy Kroh, we took a leisurely ride through Anusarn Market and the Night Bazaar. Stopping first to admire the recently renovated Ancient House (pictured above) on the banks of the Ping River, our small group then continued over the Iron Bridge to the site of the first church in Chiang Mai.

The church was founded in 1868 by an American missionary, the Rev. Daniel McGilvary (1828-1911). I’m not religious and usually baulk at the mention of missionaries and their motivation, but learning about McGilvary has softened my stance. There were no quick flights to Chiang Mai and no tourist facilities in his time. Foreigners in the city were a novelty and travel to what was then Siam involved a sea crossing that took months to Bangkok and then yet more weeks of arduous travel via boat and then elephant-back to the northern outpost of Chiang Mai. It was hard enough for any individual, but it was a journey McGilvary undertook with his family. Their main mission may have been driven by their religious beliefs, but they also established schools and performed valuable medical work at a time when malaria and smallpox were rife. 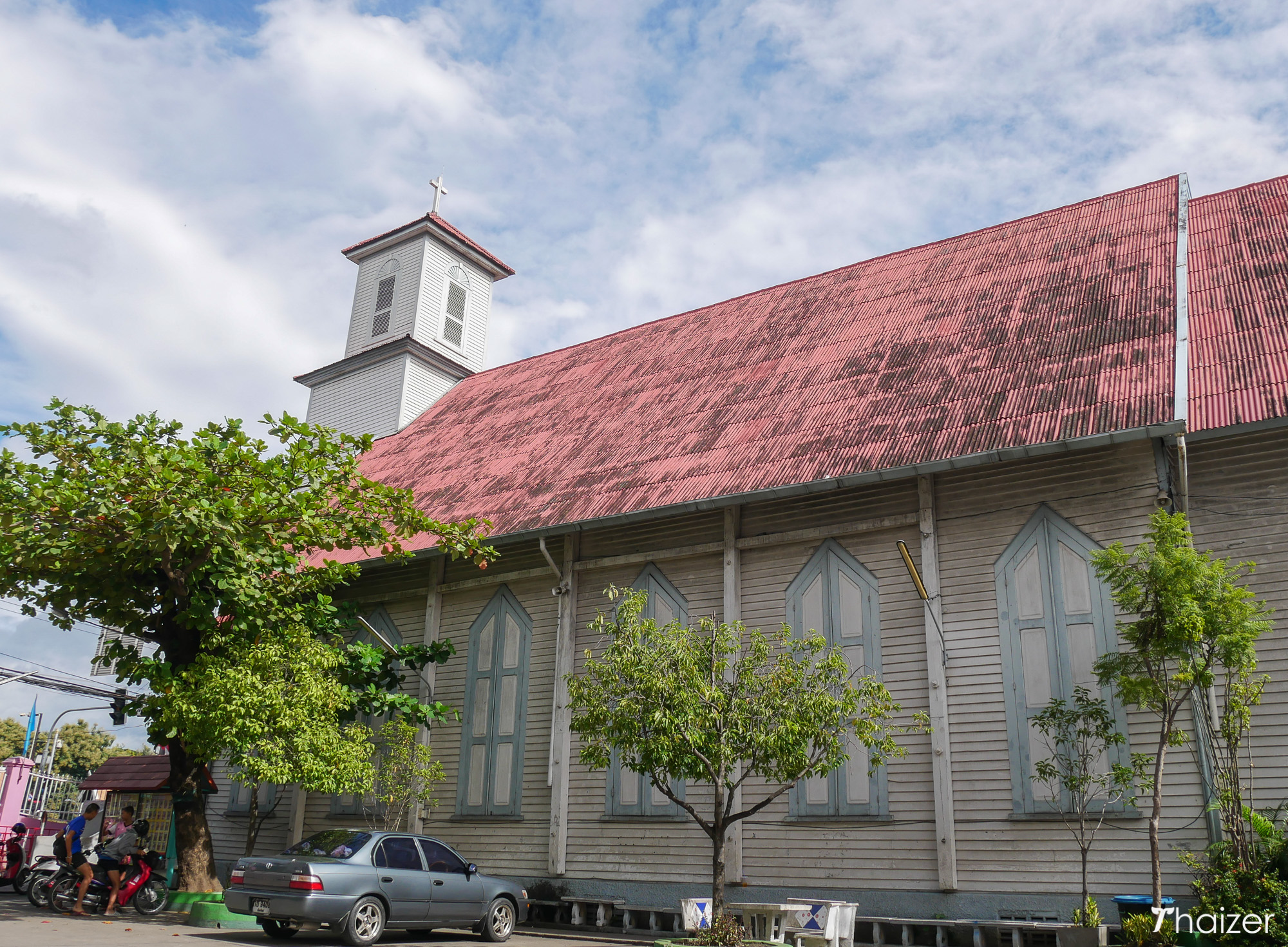 In 1968 the First Church of Chiang Mai moved to new premises a few hundred metres further north on a site which was the former home of the McGilvary family. The original wooden church is still a prominent landmark close to Nawarat Bridge and now stands within the grounds of the Chiang Mai Christian School.

Wat Ketkaram, more commonly known as Wat Kate (also spelled as Wat Gate), is a significant temple for those born in the Year of the Dog and you will find dozens of canine replicas all around the photogenic grounds. The temple is also the location for one of the most interesting museums in northern Thailand. Founded by Jarin Bain in 1999, the Wat Kate Museum is full of precious artefacts, old photos of Chiang Mai and memorabilia from days gone by. Jarin Bain, fondly known as ‘Uncle Jack’, passed away in 2013 at the age of 92. He was the son of William Bain, who himself made a lasting impression on Chiang Mai.

In the 19th century, the teak trade in northern Thailand was flourishing. A British-owned organisation, the Borneo Company, was one of the biggest players in the logging industry. They obtained the lease for a large plot of land near Wat Kate and it was in this area that villas were constructed for the ‘teak wallahs’, the station mangers employed to oversee the teak forests and logging work. One of the most impressive villas in the area was constructed for William Bain, the British director of the Borneo Company. William Bain died in 1958 and in recent years his home been sympathetically renovated by his descendants and now forms the core of the elegant 137 Pillars House Hotel.

Opposite the front entrance to Wat Kate is a romantic link to Chiang Mai’s past, the Chansom Memorial Footbridge that crosses the Ping River and links the Wat Kate district to the bustling Waworot Market area. 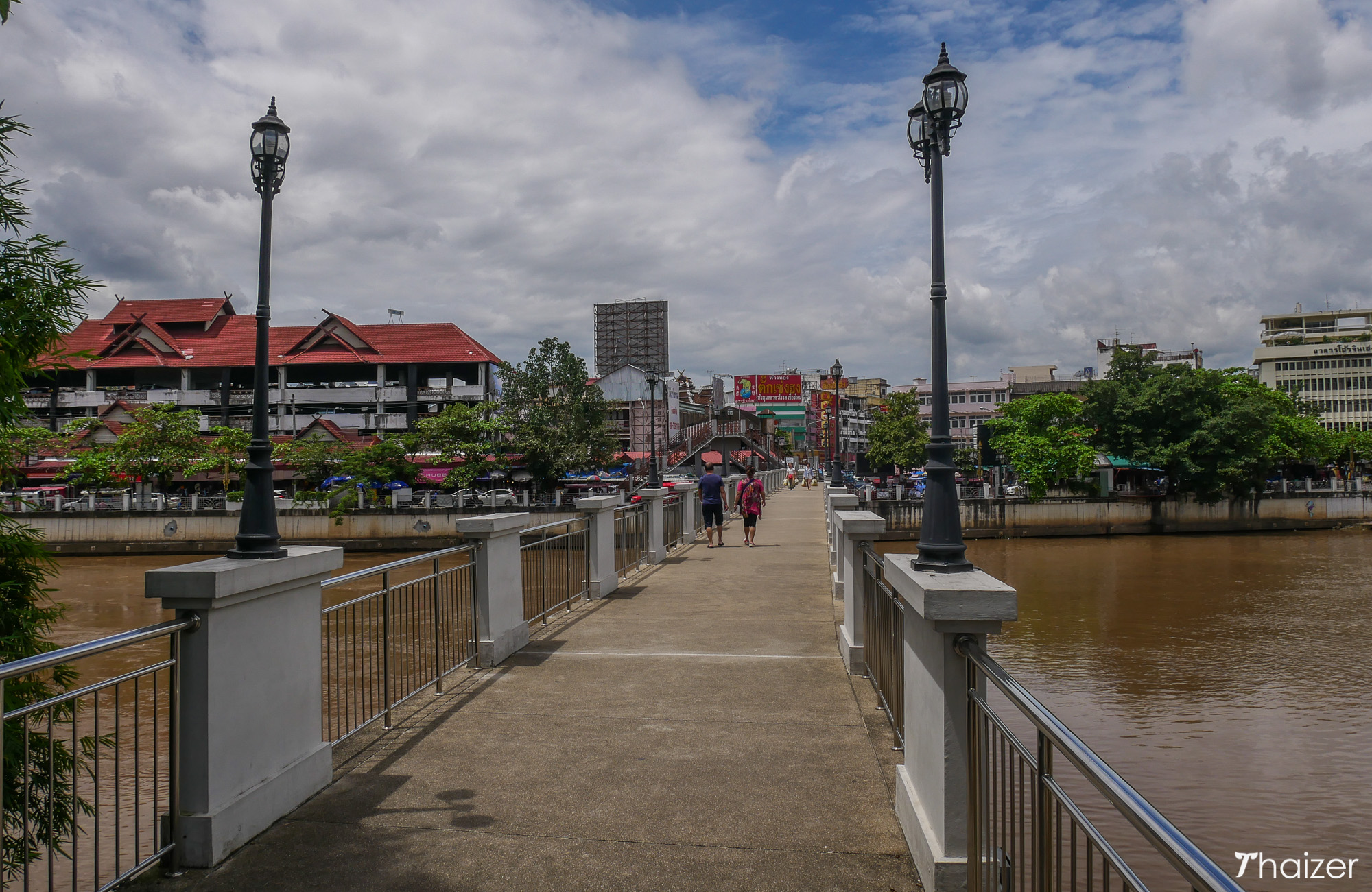 There have been various bridges in this location over the years, including some made from bamboo. In the mid-1960s a local businessman, Motiram (Montri) Koslaphirom, paid for the construction of a sturdy footbridge to honour his late wife, Chansom Koslaphirom. The Chansom Memorial Bridge opened in 1966. 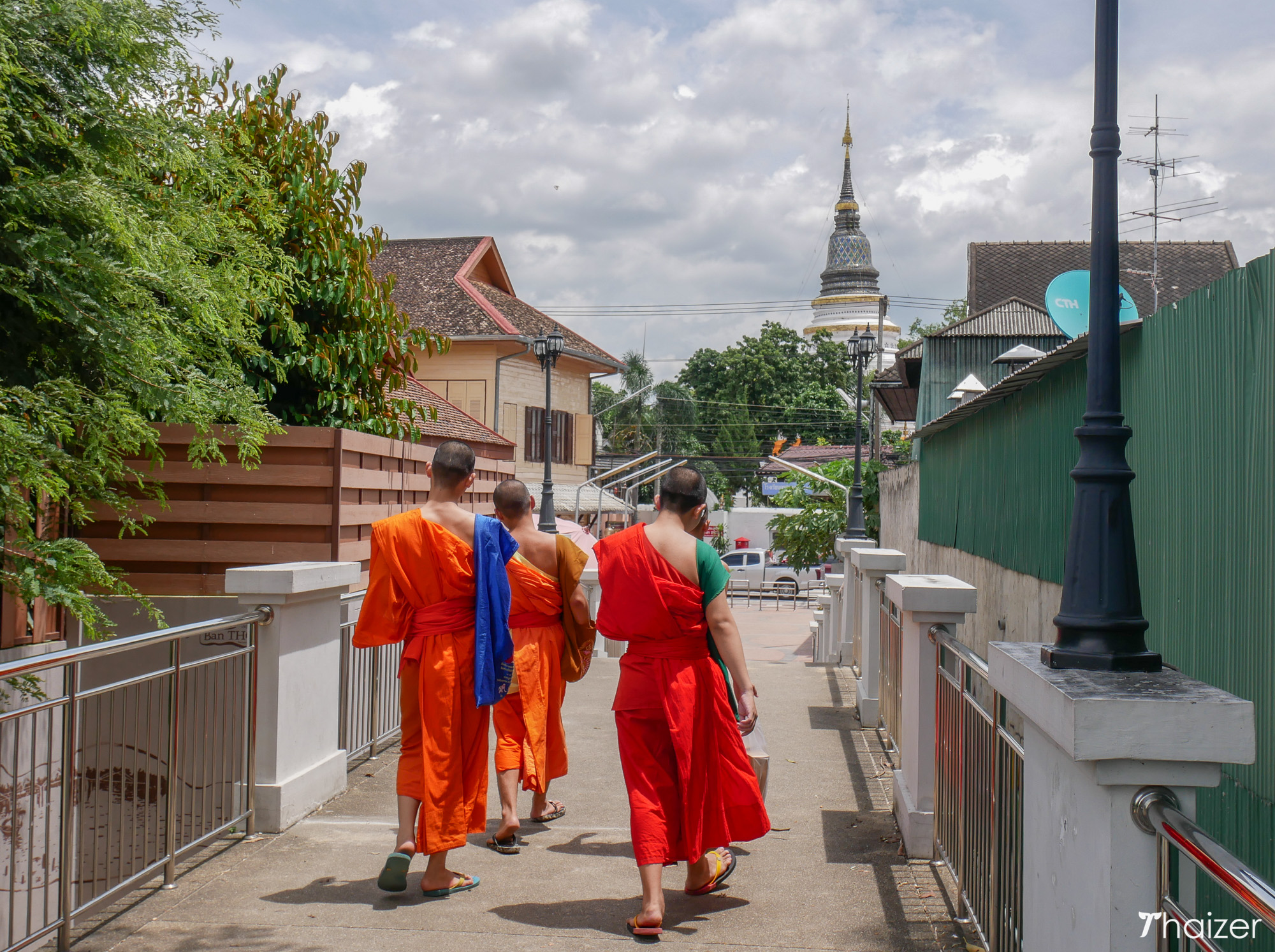 When the Ping River burst its banks in September 2011, it resulted in severe flooding in the Night Bazaar and streets close to Nawarat Bridge. In the area around Waworot Market, the flow of water and debris was so powerful it caused irreparable damage to the foundations of the Chansom Memorial Footbridge that leads from the market across to Wat Kate. The footbridge was closed to the public and, in 2012, the bridge was demolished. A new bridge was scheduled for completion by 2013, but contract disputes meant the official reopening of the new bridge was delayed until August 2016.

In addition to establishing the first church in Chiang Mai, the Rev. Daniel McGilvary and his wife, Sophie McGilvary, also established what would become one of Chiang Mai’s most famous seats of learning, the Dara Academy. Founded in 1878, Dara Academy was originally an all-girls school at a time when access to education was more difficult for girls and women than it was for their male counterparts. Dara Academy is now a multi-faith school open to boys and girls. 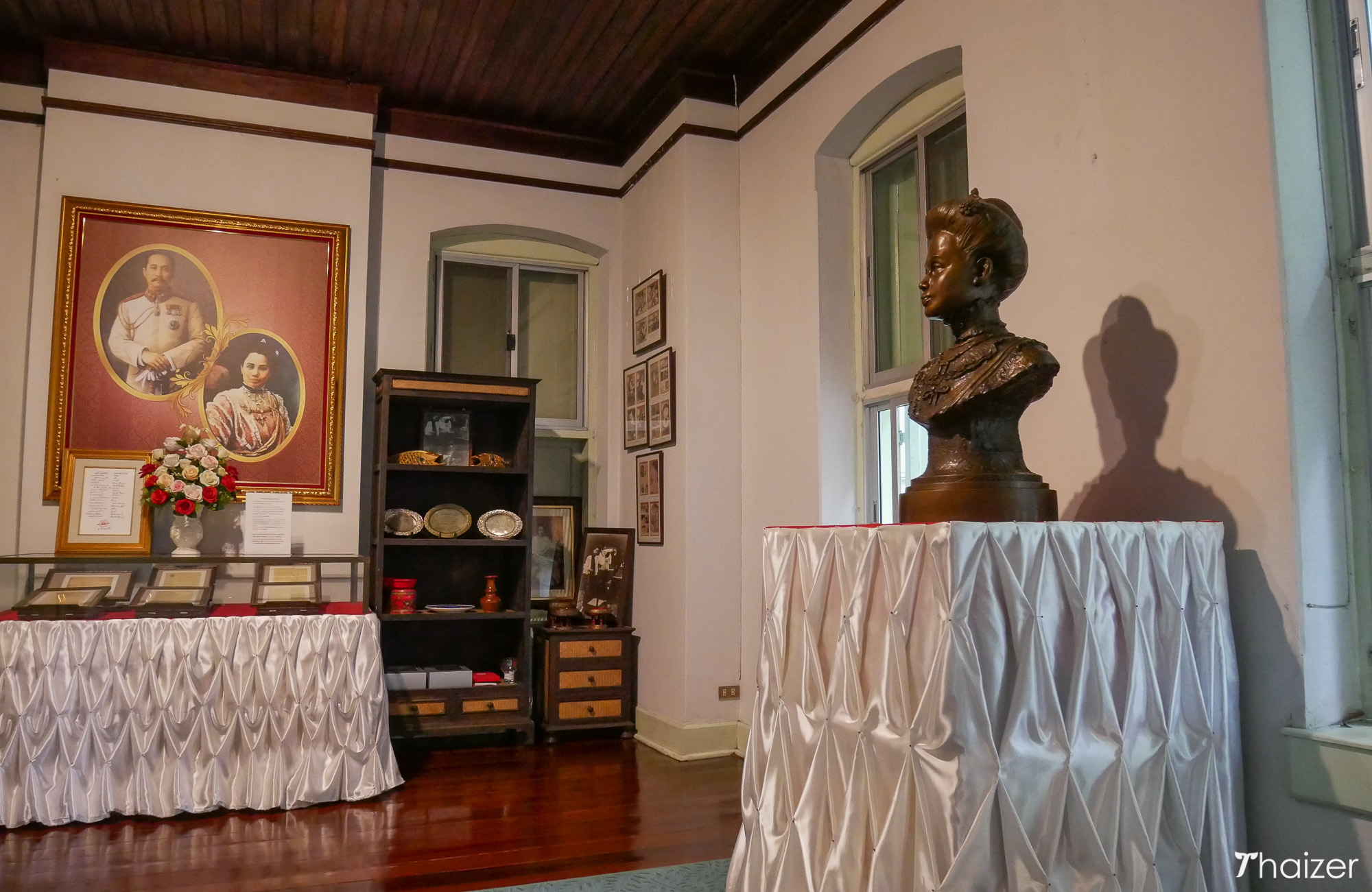 The Dara Academy is still going strong today and students past and present take great pride in attending the prestigious school. A small and informative museum within the school grounds contains some interesting memorabilia that recounts the development of the Dara Academy over the decades.

Located close to Chiang Mai’s historic Gymkhana Club is the Foreign Cemetery. The graveyard, with a statue of Queen Victoria in one corner, is reserved for foreigners under an order given by King Rama V. In 1898 the Thai monarch placed the land into the care of the British Consul with two stipulations; the land could not be sold and only non-Thais could be buried here. Over the years a number of Chiang Mai’s prominent foreign residents have been laid to rest in the cemetery, including the Rev. Daniel McGilvary. 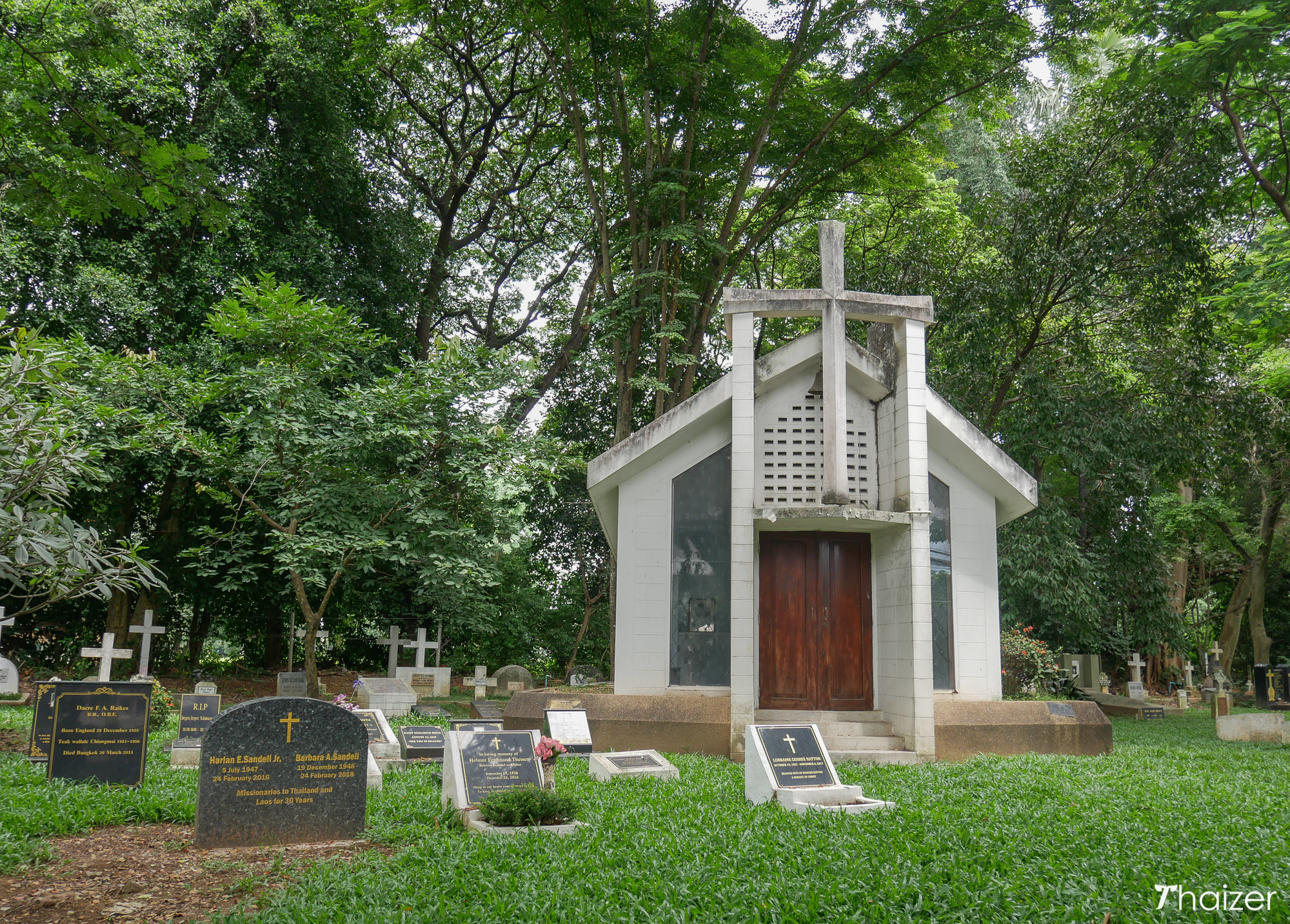 The rustic setting of Ko Klang is the site of McKean Hospital and Dok Kaew Gardens and this serene location has a remarkable history. At the end of the 19th century, this large patch of land on the banks of the Ping River was being used by Chiang Mai noblemen to keep their elephants. In 1907 the American missionary, Dr. James McKean, approached the then ruler of Chiang Mai, Chao Inthawarorot Suriyawong, with a proposition. McKean asked for land to be donated to set up a treatment centre for people affected by leprosy. The disease was reasonably common in those days and the Chiang Mai ruler agreed to the request with the centre established at Ko Klang the following year. 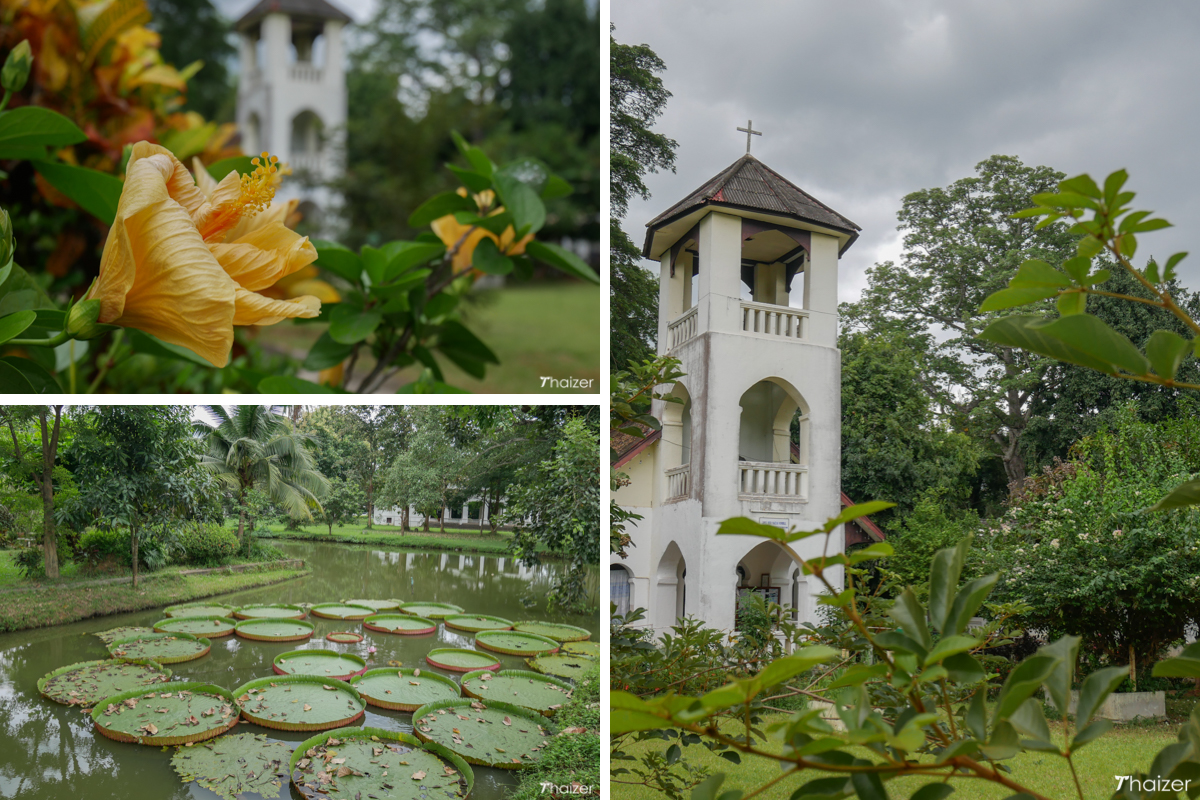 McKean was a man ahead of his time and his compassionate approach to people with leprosy attracted thousands of patients to the island where they were treated with respect rather than as social outcasts. The community grew and in time they built their own schools and shops at Ko Klang. 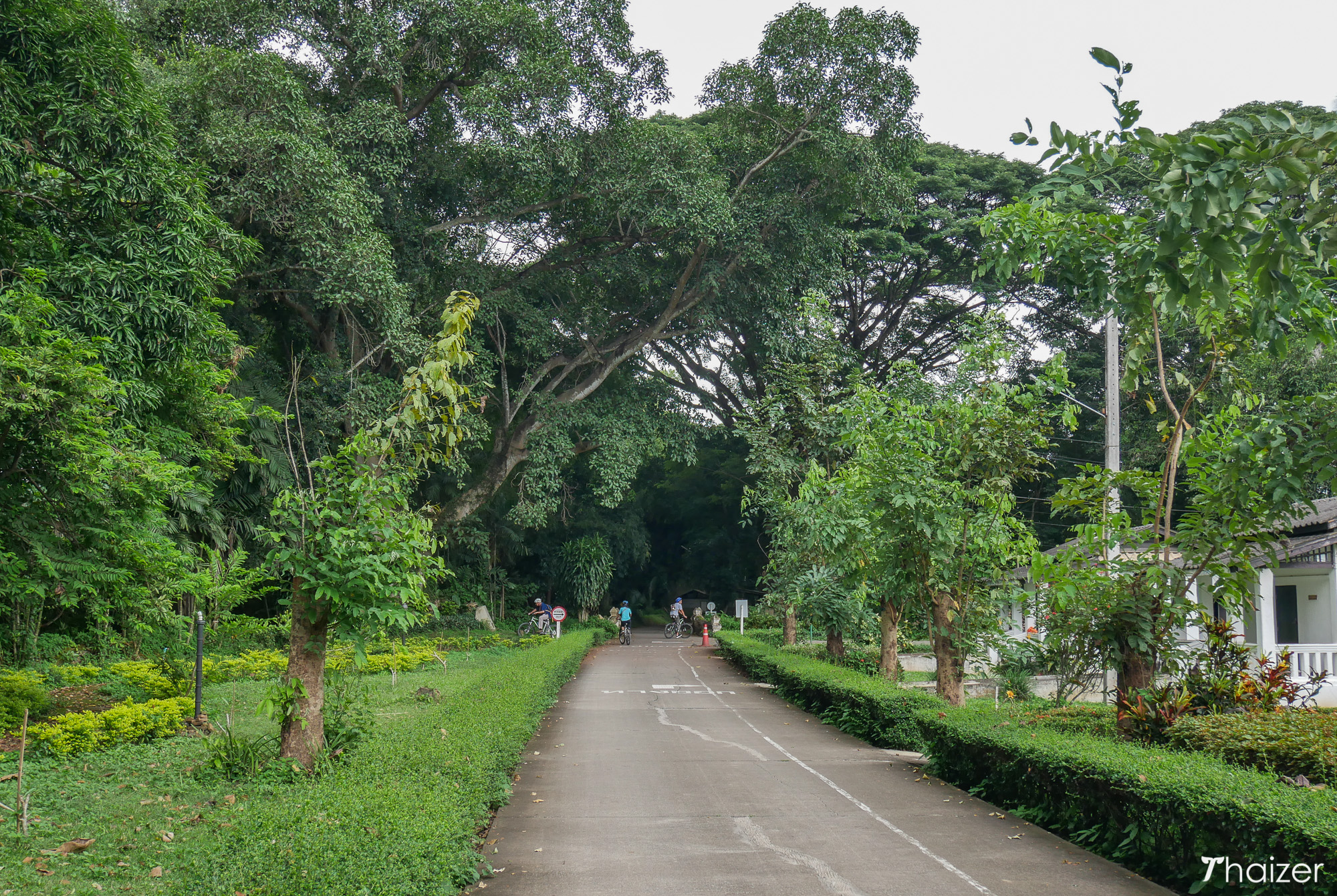 The stigma of leprosy lived on long after McKean’s death and it wasn’t until the 1980s that a cure was found for the disease. Over the years, Thai royalty including King Rama III and HM the late King Bhumibol Adulyadej and HM Queen Sirikit visited McKean Hospital. Queen Elizabeth II and Prince Phillip also visited in the 1970s as too have a number of other overseas dignitaries which all helped boost the profile and in turn helped funds for the centre.

Today, the McKean Hospital and Dok Kaew Gardens offer holistic care and assisted living for seniors from a number of countries. The old buildings and even older trees to be found at Ko Klang make for a stunning setting for a cycle ride. 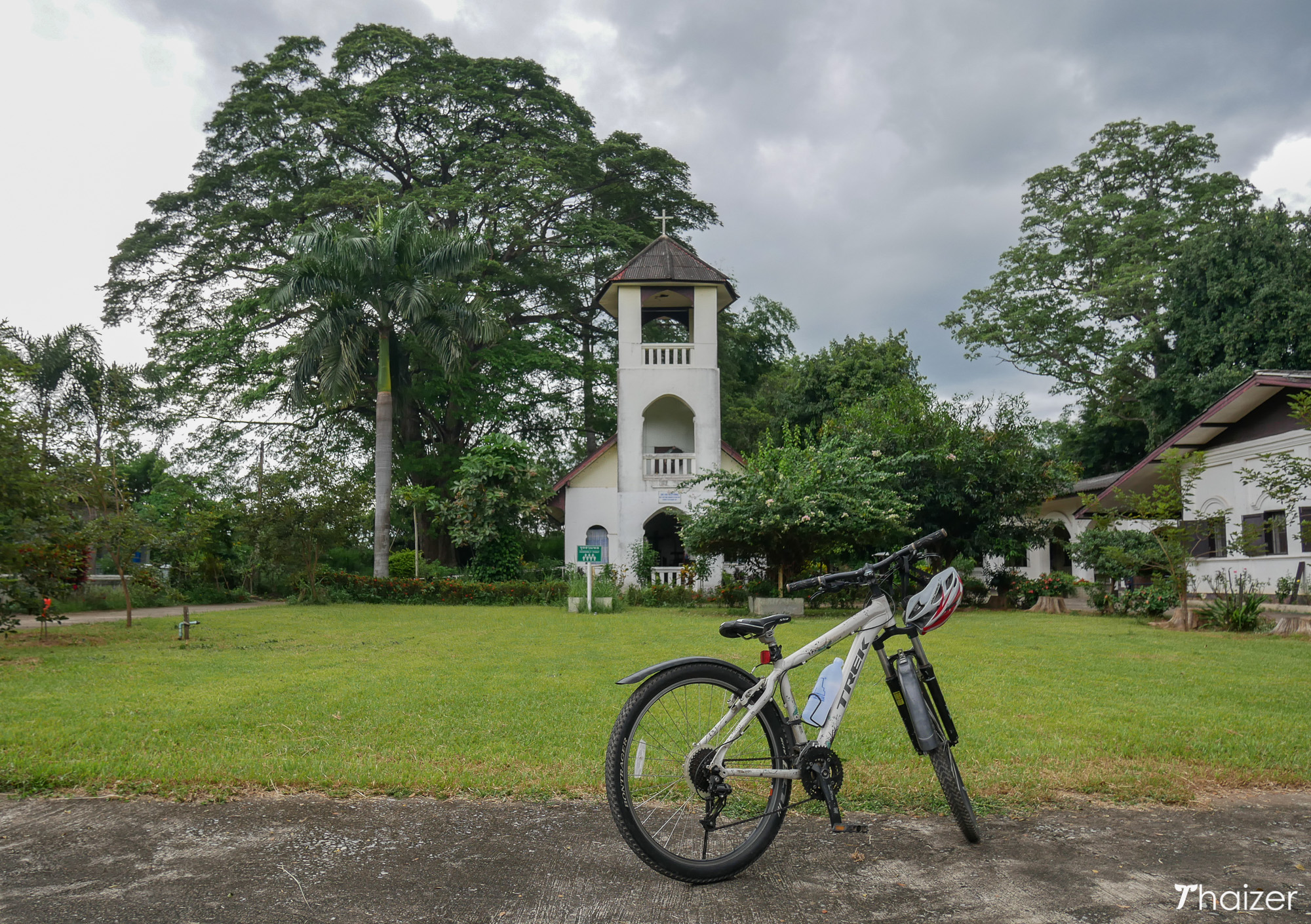 From the leafy grounds of the McKean Hospital we finished off our tour by cycling around Wiang Kum Kam, the ancient city that predates Chiang Mai. Cycling around the atmospheric old ruins as the sun slowly dropped was a perfect way to end a fascinating and educational day.

How to book this tour

This tour can be booked via Green Trails and you can also arrange tailor-made tours of the Chiang Mai area via Green Trails’ sister company, Chiang Mai a la Carte. This was a test run so the name of the tour, route and locations may change in the future. This trip also included a visit to a local market and a stop for lunch nearby. Although the tour involved some cycling, it was gentle exercise along quiet lanes and is suitable for all the family. For the busier parts of the route, you will be a passenger in a samlor and then either a pick-up truck or a mini-van.

Disclaimer
I was invited as a guest of Green Trails to give my feedback. I wasn’t obliged to write anything about the tour, but I’m happy to share my experience of what was an excellent day trip where even an old-hand like me learned a lot of new things.