They may be amongst the Thai capital’s least well-known attractions, but the gardens and traditional buildings of Suan Pakkad Palace (known in Thai as ‘Wang Suan Pakkad’) are well worth seeking out if you want to get off the main tourist trail during your visit to Bangkok. The palace and attached museum is a relaxed place with friendly staff and the very fact that it is off the main tourist trail makes the experience all the more pleasant. It’s a pretty venue rather than a spectacular one and can’t be compared to the grandeur of Wat Phra Kaeo and the Grand Palace, but if you’ve enjoyed a visit to Jim Thompson’s House, the chances are you will also enjoy Suan Pakkad Palace. 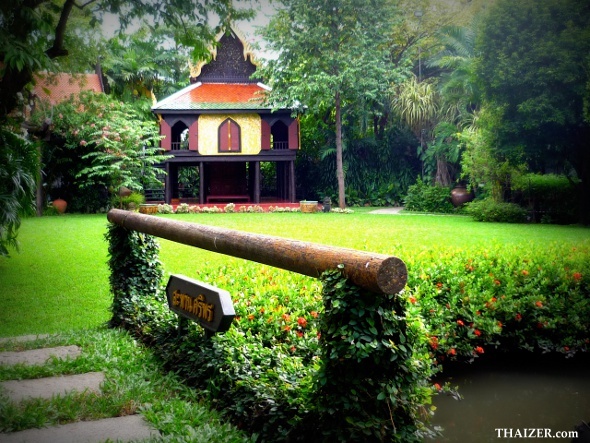 The name ‘Suan Pakkad’ translates to ‘cabbage garden’ which is precisely what the land was before it became a royal residence in the 1950s. It was here where Prince Chumbhot Paribatra of Nagor Svaga and his consort, Princess Chumbhot Paribatra, built a unique royal home. The prince, a grandson of King Chulalongkorn (Rama V), had the idea to transport in traditional Thai buildings rather than build them from scratch. Four old-style Thai houses belonging to the prince’s family were carefully taken apart and moved from their original locations and reconstructed in the grounds of Suan Pakkad in 1952. These four houses, dating back to the 18th century, formed the palace with elegantly designed inter-connecting walkways. In later years four more traditional wooden houses were also transported here in addition to the splendid Lacquer Pavilion (pictured above) which is located at the back of the garden.

Dating back to the 17th century, the Lacquer Pavilion was in a state of disrepair in its original location at a temple just outside Ayutthaya. The abbot of the temple gave his blessing for the pavilion to be moved to Suan Pakkad in 1959 where it was lovingly restored as a birthday present for Princess Chumbhot Paribatra. The pavilion displays beautiful gold murals on a black lacquer background. The murals depict the Life of Buddha in addition to stories from the Indian epic, Ramayana.

Adjacent to the Lacquer Pavilion is an open-sided pavilion which houses the wooden Royal Barge ‘Kao Kung Bayam’ which was used by Prince Chumbhot’s father for Royal Barge Processions during the reign of King Chulalongkorn.

Each of the teak houses at Suan Pakkad now holds collections of arts, curios and family heirlooms from the prince and princess. Whilst still living at Suan Pakkad, the royal couple made a decision to open up the grounds of the palace so that the wider public could view this wonderful collection. The prince and princess believed that whilst they were fortunate enough to have these items in their private collection, they belonged to the Thai public as part of the national heritage and should be made accessible to those that wished to view them. 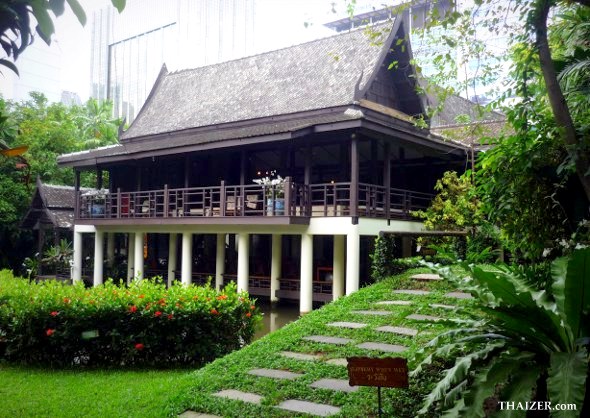 It’s an eclectic mix of artefacts that are arranged in each of the eight houses with fossils, ceramics and furniture all neatly displayed. Visitors are given a leaflet (copies available in English and Thai) which shows the layout of the numbered houses and an explanation of what can be found in each one. For instance, House 6 was one of my favourites with a stunning collection of traditional Khon masks and puppets. House 1 is split into two levels with old-style musical instruments on the lower floor and ancient Buddha figures on the upper floor. You are free to take your time and wander around at your leisure and unlike some of the more popular attractions in Bangkok, this makes for a more intimate experience.

Entering the palace grounds from the main Sri Ayudhaya Road, there is an arts centre and museum on the left-hand side which houses a collection of prehistoric artefacts and pottery from the renowned archaeological site in north-east Thailand, Ban Chiang. The arts centre was built in 1996 and looks a little out of place compared to the beauty of the other traditional buildings.

Old and the New

The manicured gardens and traditional teak houses provide a stark contrast to modern Bangkok which has built up all around this former cabbage patch. Flanked on one side by the busy Sri Ayudhaya Road and on the other by the elevated airport train link, this is a little oasis of calm and antique beauty in the modern metropolis. The giant Baiyoke Tower looms in the background, but nothing distracts from the peaceful ambience. Even if museums aren’t normally your thing, Suan Pakkad is worth placing on your Bangkok itinerary, especially if you’ve been to the Thai capital before and already seen the main tourist attractions.

Suan Pakkad is open daily from 09.00 to 16.00. The nearest Skytrain station is Phaya Thai where you should use Exit 4 and walk along Sri Ayudhaya Road in the direction of Bangkok’s tallest building, the Baiyoke Tower. It’s approximately a ten-minute walk from the Skytrain station to Suan Pakkad Palace. If you are combining this with a trip to Bangkok’s tallest building, the Baiyoke Tower is a 15-minute walk from Suan Pakkad.

Entrance fee to Wang Suan Pakkad is 100 Baht for non-Thai people and 50 Baht for Thais. This does include a souvenir fan which you can use to keep yourself cool and then take away with you when you leave. Taking photos is prohibited in some areas and you will also be required to remove your shoes before entering each of the houses. Large bags need to be deposited in the secure lockers (free) in the reception area when you pay for your ticket.