You are here: Home / Sukhothai

The majority of overseas tourists that head to Sukhothai do so for one reason; the wonderful Sukhothai Historical Park. Filled with ancient temples dating back almost 800 years, the UNESCO World Heritage Site at Sukhothai is one of Thailand’s most famous tourist attractions set amidst beautiful countryside fringed with paddy-fields and mountains. The Historical Park is located in an area usually referred to as Old Sukhothai, a 15-minute songthaew ride away from the town of New Sukhothai. 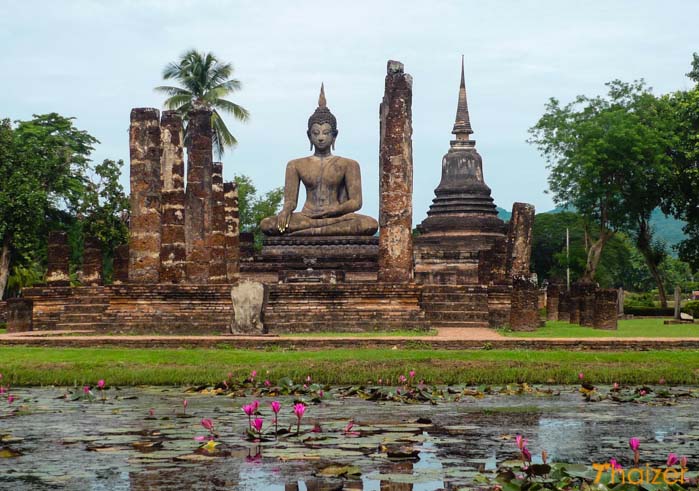 The main choice is whether to stay in Old or New Sukhothai. There are pros and cons to each location and it will ultimately boil down to individual personal preference. Basing yourself in Old Sukhothai places you closer to the Historical Park, but there is more choice of accommodation and places to eat and drink in New Sukhothai. If you do stay in New Sukhothai, shared songthaews to the Historical Park in Old Sukhothai cover the journey in 15 minutes with the one-way fare 30 Baht per person.
Read my personal review of At Home Sukhothai guest house
Sukhothai Midtown Resort
Find hotels and guest-houses in Sukhothai

What to see and do

Although the number one attraction for visitors to Sukhothai is the Sukhothai Historical Park, if you are visiting the region you should definitely try to make time too for the less-visited temples and beautiful countryside at nearby Si Satchanalai Historical Park. Try to spend at least two or three days in Sukhothai, but if you only have time for a day visit the must-see temple ruins are Wat Mahathat and the giant seated Buddha at Wat Si Chum. Away from the temples, you should try the famous noodle dish named after the area, ‘kuay thiao Sukhothai‘

The Kingdom of Sukhothai was established in 1238 with the area previously part of a Khmer empire. Sukhothai is sometimes referred to as the first Thai kingdom although historians will advise that isn’t strictly true with other Thai kingdoms including Lanna, Phayao and Chiang Saen having already been established before Sukhothai rose to prominence. What is undeniable is that the Sukhothai era was a golden one with the legacy living on in the language, art and religion of modern-day Thailand. King Ramkhamhaeng the Great (reign 1278-1298) is credited with developing the first Thai script and under his guidance Sukhothai expanded its borders to form an area larger than Thailand is today with parts of what is now Laos (including Luang Prabang and Vientiane) included in the Sukhothai kingdom. The death of King Ramkhamhaeng resulted in a rapid decline for Sukhothai with Ayutthaya to the south becoming the new power-house and by 1438 the Sukhothai kingdom was no more.

How to get to Sukhothai

Trains from Bangkok or Chiang Mai go to Phitsanulok (listen for Thai people saying ‘Pee-Lok’ as an abbreviated version of the name) from where you need to transfer to a bus. The bus journey between Phitsanulok and Sukhothai takes an hour and departs at regular half-hourly intervals throughout the day.
Booking Thailand train tickets online »

Bangkok Airways operates flights out of Bangkok Suvarnabhumi (BKK) to the delightfully photogenic Sukhothai airport (THS) which is located outside of town, but there is a connecting minivan service from the airport (for an extra charge) to New and Old Sukhothai. Flight time Bangkok to Sukhothai is 75 minutes and the road journey to New Sukhothai from the airport is an additional 20 minutes (35 minutes to Old Sukhothai)