Thailand has a large number of stray dogs and despite some efforts to ease the problem it remains an issue that visitors can’t help but notice. The cute puppies which are bought and sold in local Thai markets aren’t as cute to their owners as the dogs get older and larger. As their upkeep becomes too expensive, all too often the dogs are abandoned. In some areas, kind-hearted organisations and individuals try and look after the street dogs, but there are plenty which are left to roam the sois and scavenge through rubbish bins. Although the street dogs are often mangy, if you don’t bother them they won’t bother you. This is especially true during the heat of the day where many dogs just want to sleep. It can be different very late at night in some deserted areas where dogs occasionally form into packs that should be avoided.

Dogs can usually be found in the compounds of Thailand’s temples where monks take care of them. Owners who can no longer afford to look after their pet dog may abandon it at the wat in the knowledge that the monks will feed it. These dogs are usually quite placid and you can safely walk around the temples without worrying about them, but they can become excitable when it comes to feeding time. It is also not unusual for the dogs to act as unofficial temple wardens. A striking example of this is the oldest temple in Chiang Mai, Wat Chiang Man, which has an area where it is prohibited for women to enter. If a woman approaches the area, the dogs wake from their slumber and begin to bark. 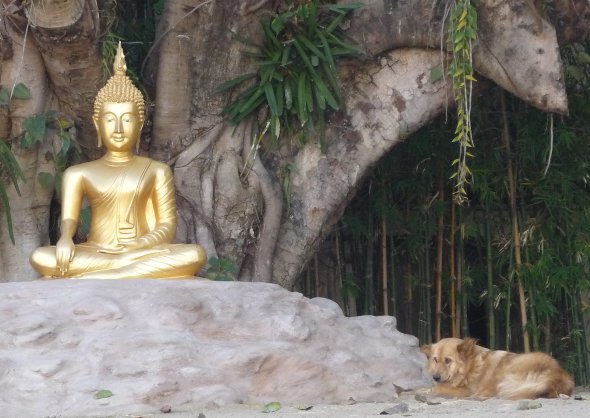 If you have the misfortune to be bitten or scratched by a dog in Thailand, don’t panic. Clean the wound with water and antiseptic and visit the nearest hospital for rabies vaccinations. You will normally require a number of jabs (typically 4 or 5) over a period of a few weeks, so if you are only in Thailand for a short time and you get bitten, you may have to finish the treatment in your home country.