For more than 200 years the most important Buddha image in Thailand has resided at the temple of Wat Phra Kaeo in Bangkok. But the 66cm high statue has not always been kept in Bangkok, nor has it always been in Thailand.

Phra Kaeo Morakot (Emerald Buddha Image) is made from jade; the use of the word emerald (kaeo) refers to the green colour of the statue. According to Hindu and Buddhist legend, the jade image was created by the gods as a gift for a revered monk from Patalibutra city (in what is now part of northern India). Historians know that the Emerald Buddha has moved from place to place in Asia as different armies and kingdoms fought for ownership of a statue which is supposed to bring prosperity and good fortune to the country in which it resides. But the full story behind some of the early history of the Emerald Buddha remains a mystery. It’s thought that from India the statue was moved to Sri Lanka and from there was taken to Cambodia where it was kept for a while at Angkok Wat. At some stage the Emerald Buddha arrived in Thailand and resided in various temples and locations as different cities and kingdoms rose to prominence including Ayutthaya, Lawo (now Lopburi province) and Vajiraprakarn (now Kamphaeng Phet province).

From historical records, it’s known that Phra Kaeo Morakot was kept in Chiang Rai from 1391-1436 and it was here in Chiang Rai that an incident occurred which added to the legend of the statue. 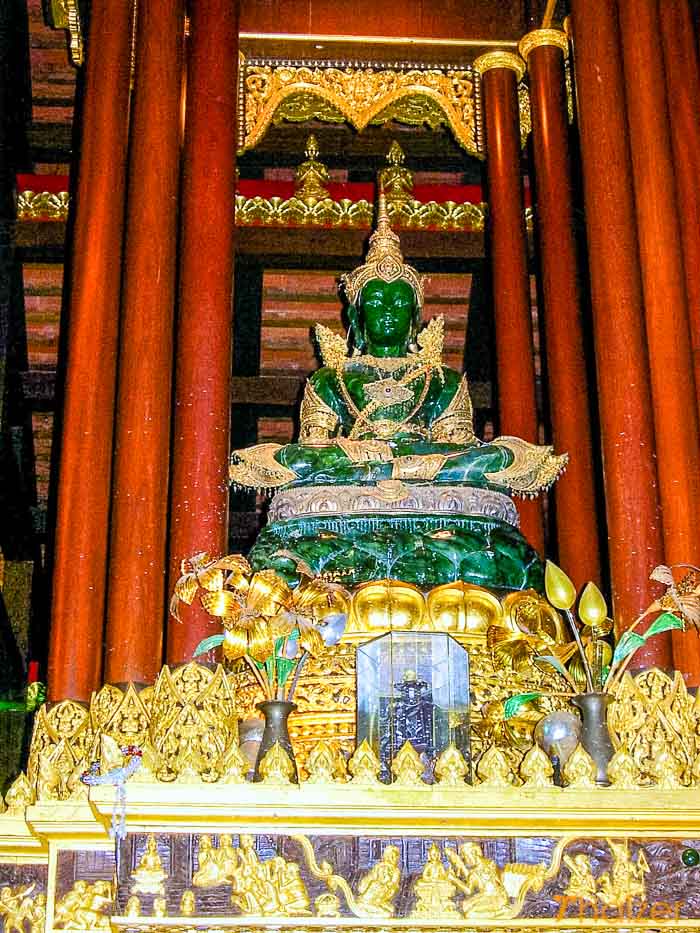 In 1434, lightning struck a pagoda at a temple called Wat Pa Yeah. The strike dislodged a plaster Buddha which broke open and revealed the precious jade Buddha which had been disguised in such a way to prevent it being taken by invaders. As a result of this discovery, the temple of Wat Pa Yeah was renamed Wat Phra Kaeo (Temple of the Emerald Buddha). In 1991, to honour the 90th birthday of the Princess Mother, a new jade Buddha image (pictured above) was commissioned and placed inside the Phra Ubosot (Preaching Hall) at the Chiang Rai temple.

In 1778, King Taksin went to war with Laos and retrieved the Emerald Buddha which he took back to his capital at Thonburi. When the new capital was established at Bangkok in 1782 under General Chakri (King Rama I) a magnificent new temple was built to house the Emerald Buddha and the statue has remained at Wat Phra Kaeo (or more formally Wat Phra Sri Ratanasasdaram) in Bangkok from that date.

The chapel where the Phra Kaeo Morakot image resides is protected at the entrance by mythical giants known as ‘yaksha’. Some overseas visitors to Wat Phra Kaeo expect the Emerald Buddha to be much larger and may even be underwhelmed by the sight of the diminutive figure perched high up on an altar, but this statue is revered by Thai people. At the start of each different season (rainy, hot, cool) a royal ceremony takes place where the robes adorning the Emerald Buddha are changed. His Majesty the King traditionally carried out these duties, but in recent years the Crown Prince has deputised for the Thai monarch.