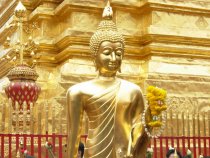 There are various forms of Buddhism followed throughout the world, but in Thailand 95% of people are Theravada Buddhists.

Theravada (‘the Teaching of the Elders) is a school of Buddhism that believes it has remained closest to the original teachings of the Buddha. As well as Thailand, Theravada Buddhism is particularly strong in Cambodia, Laos, Burma and Sri Lanka.

Buddha means ‘the awakened one’ in Sanskrit. The followers of Theravada Buddhism follow the teachings of Gautama Buddha. There were three other Buddhas before Gautama Buddha. The fifth and final Buddha is predicted to arrive in 4457 A.D. Buddhists believe that Gautama Buddha was the five-hundredth incarnation of a single being and the stories of these 500 lives are collectively known as the Jataka.
(Hindus also accept Gautama Buddha believing him to be the ninth manifestation of the god, Vishnu).

Is Buddhism a religion?

Scholars have debated over the centuries whether or not Buddhism is a religion and it is open to interpretation. Buddhism isn’t a system of faith or worship and there is no belief in an Almighty God. Buddhism is based on the teachings of the Buddha and in simple terms offers guidance for how to live your life. The emphasis is very much on the individual. There are no supernatural solutions to spiritual problems, but the individual can search within themselves and use meditation to gain enlightenment or ‘awakening’. Buddhism does not claim to have a monopoly on the truth and as such is accepting of all religions.

Thai Buddhism happily sits along beliefs which also draw on influences from animist and Hindu elements. This apparent contradiction is a consequence of Thailand’s complicated history. As such, it is not unusual to see a statue of a Hindu deity in a Buddhist temple nor is it unusual for Buddhist monks to be called upon to exorcize a phi or ghost that is causing problems.

Although some Buddhist practitioners may strive to achieve enlightenment or Nirvana, for most ordinary Thai Buddhists there is a simpler goal and that is to be reborn as something higher.

Theravada Buddhism is built on the philosophy of perpetual reincarnation. Life is a cycle and only enlightened beings can break the cycle and free themselves by entering into the blissful state of Nirvana. Being a good Buddhist does not guarantee Nirvana, but good behaviour in life is believed to ensure that in the next life the individual will be born higher up. In this hierarchy of rebirth, animals are at the bottom and men are higher up than women. Monks are at the top.

Karma is part of Buddhist philosophy. The actions of a living being are known as Karma and there can be good Karma as well as bad Karma. The result of past actions or present doings may bring about a life of suffering or inequality just as it may bring about a happy and contented life. Buddhism teaches individuals that they are architects of their own fate and are responsible for their own happiness or misery.

Although Thai Buddhists may appear to pray or worship Buddha images it is not done in the same way as it is with other religions. Buddhists know that Buddha does not grant special favours or requests. By offering flowers and incense to a Buddha image, the individual is paying reverence to what the image represents rather than seeking special assistance in the form of having prayers answered. It is a source of inspiration to help that person live their life in the right manner and to remind them of the teachings and noble example of Buddha. Buddha himself cannot change a person’s fortune or life, but by following the Buddha’s teachings that person can change themselves.

The year in which the Buddha died, or entered Nirvana, is believed to be 543 B.C. and this is why the traditional Thai calendar is 543 years ahead of the Western one. For example, the year 2008 A.D. is represented in Thailand as 2551 B.E. (Buddhist Era).