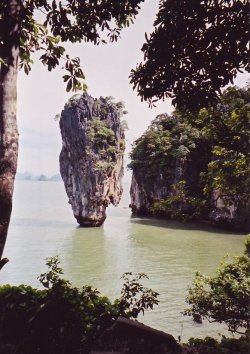 A popular day tour from Phuket, Krabi and Khao Lak involves a visit to the islands and rock formations of Ao Phang Nga (Ao= Bay). The bay is located in the Andaman Sea in between Phuket and Krabi and incorporates some stunning scenery. Mangroves line parts of the shoreline and limestone karsts jut out of the sea. The bay area was once covered by limestone mountains which were gradually eroded over millions of years by rainwater and carbon dioxide in the atmosphere. Approximately twelve thousand years ago a dramatic rise in the sea level caused flooding of the area and further weathering and erosion has resulted in the craggy rock formations and islands that can be seen today.

The most famous location in the bay is James Bond Island which derives its name after featuring as Scaramanga’s hideaway in The Man With the Golden Gun. The official name is Khao Ping Gan which in Thai means ‘hills leaning against each other’ and is sometimes referred to on maps as Leaning Rock. All tours to Phang Nga Bay will stop here for photos and the chance to buy souvenirs. Standing isolated in the sea just 200 metres from James Bond Island is Khao Tapu which resembles a needle or a nail which has been driven into the sea (tapu = nail). This is one of the most photographed sights of Phang Nga Bay with Khao Tapu also featuring in The Man With the Golden Gun. 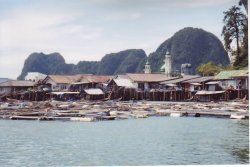 Tours will often stop at Ko Panyi for lunch. This is a fully-functioning village complete with a mosque and school. The houses and shops have been built on stilts over the sea and provide a unique setting for your lunch. Some organized tours can arrange for an overnight stay at Ko Panyi which gives you a chance to see the village free from the tourist boats which congregate here at lunchtime.

Tours of Ao Phang Nga can be arranged from the small town of Phang Nga where long-tail boats can take you around the bay on a half-day or full-day trip. However, most visitors to the area arrive directly on tours from Phuket or Krabi which are more expensive, but more convenient for the majority of tourists. There are a number of different tours available which range in price. Note that the islands of Ao Phang Nga are part of a National Maritime Park which is subject to an entrance fee. Most tour outfits will include this in the price (double check when you book). Just about every tour operator provides the opportunity to swim or snorkel in the bay and some will include lunch. More expensive tours will provide canoes or kayaks which are probably the best way to explore the rock formations up close and allow you to paddle in and out of the hidden lagoons.
photos © thaizer.com

Buddha Images for Each Day of the Week
Next Post: Kanchanaburi War Cemetery (Don Rak)