A short drive from the middle of Chiang Rai city, Baan Dam (Black House) is the unique creation of national artist, Thawan Duchanee. Part art studio, part museum, part home, Baan Dam is an eclectic mix of traditional northern Thai buildings interspersed with some outlandish modern designs. Baan Dam is a thought-provoking combination of sanuk, the surreal and the sombre and whilst it’s fair to say that some of the artwork and themes on display won’t be to everybody’s liking, I’d still recommend checking out the Black House if you are visiting Chiang Rai.

In Thai, ‘baan’ means home or house and ‘dam’ means black. Baan Dam is sometimes referred to as the ‘Black Temple’, but despite the temple-like appearance of the main building it’s incorrect to describe Baan Dam as a temple. 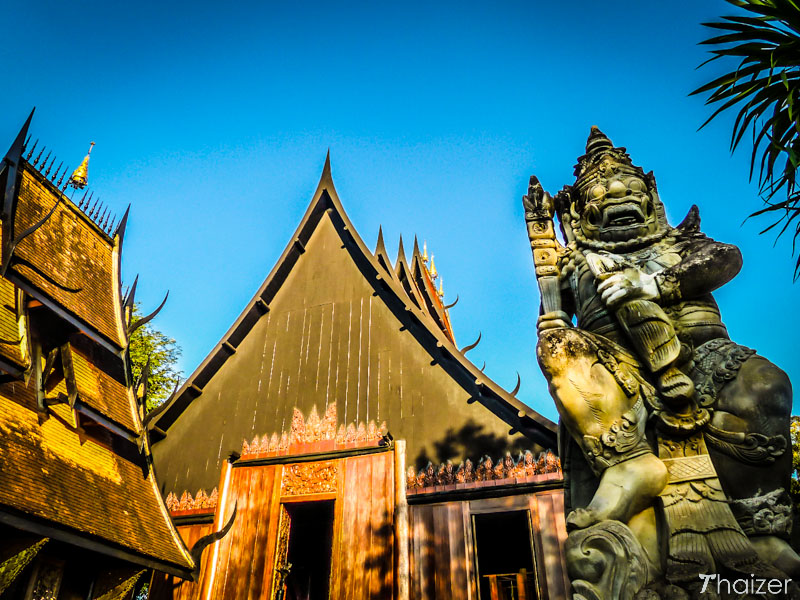 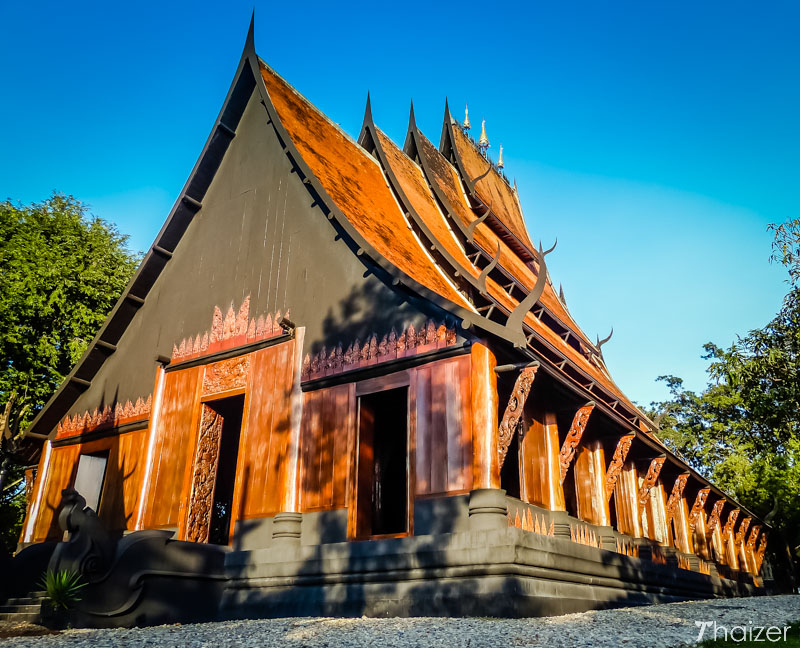 The Black House isn’t just one structure, but a collection of around 40 buildings of varying shapes and sizes dotted around a peaceful garden. The largest structure is located by the main entrance and sets the tone for what visitors can expect as they explore the rest of the site. Traditional and elegant on the outside, the combination of honey-coloured teak timbers and imposing doors are a work of art in their own right, but it’s what’s inside that surprises. A table of epic proportions that wouldn’t look out-of-place in the Lord of the Rings draws the eye. Snake skins run the length of it to create the most unusual table-runner you’re ever likely to see. The cavernous interior of the hall is interspersed with animal skulls and buffalo horns and this theme is continued elsewhere at the Black House. This is Thawan Duchanee’s interpretation of Buddhist philosophy and his style has caused plenty of controversy over the years. I’m no art aficionado, but the art and themes on display seem to represent the suffering that Buddha saw with Thawan using animal skins and bones to indicate the sickness, old age and death that the Buddha witnessed on his travels. Other artwork on show appears to reflect human desire and cravings and some of the darker imagery and phallic statues might not be something you want the children to see. There’s certainly plenty of food for thought and different people will have their own interpretation of Thawan’s work. 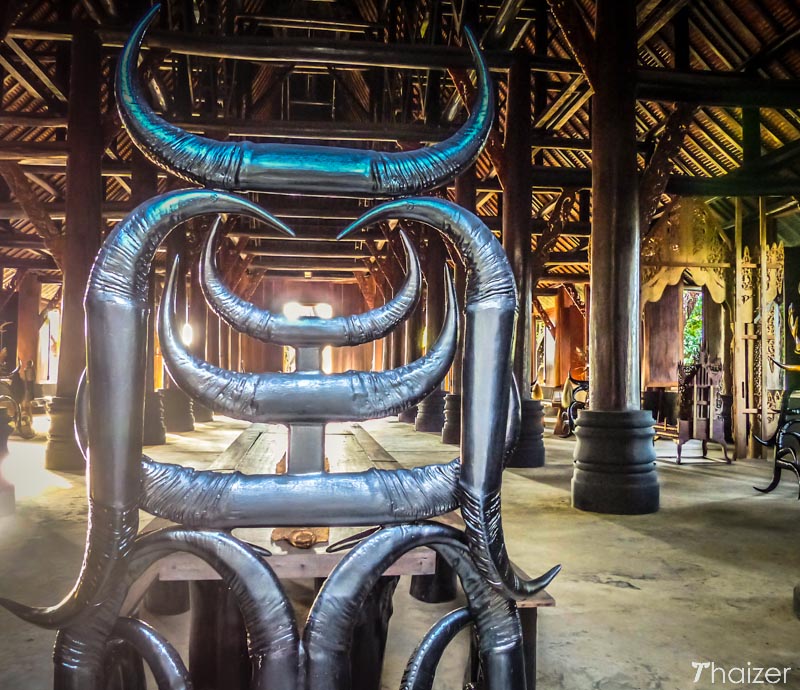 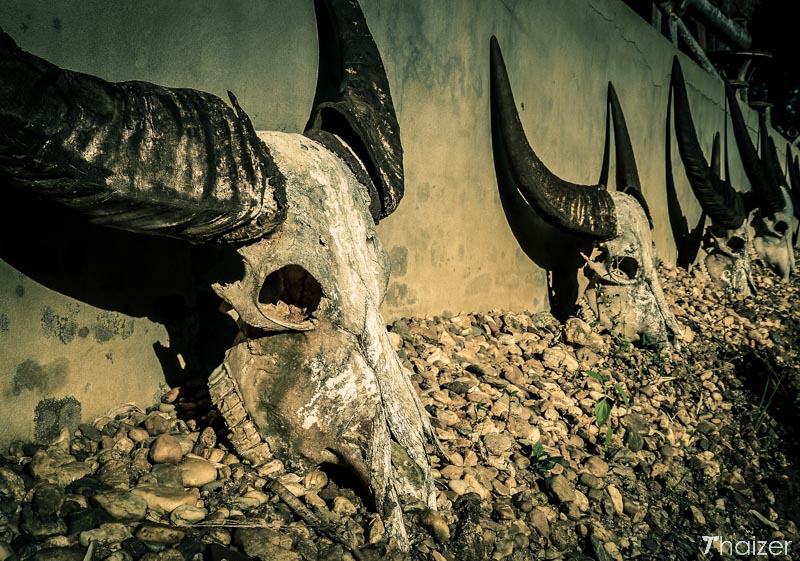 Although visitors are welcome to go inside some of the structures, there are some which remain off-limits. For example, the large whale-like building is actually Thawan’s bedroom where he sleeps when he is on site. 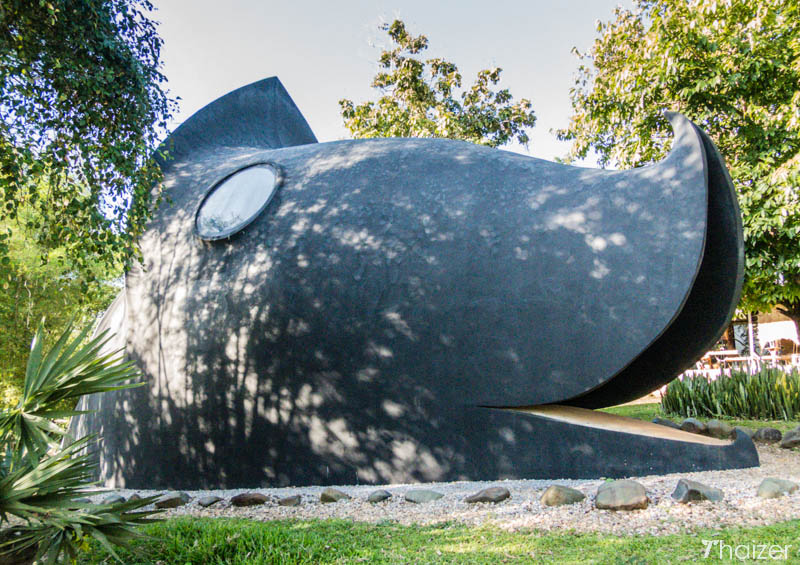 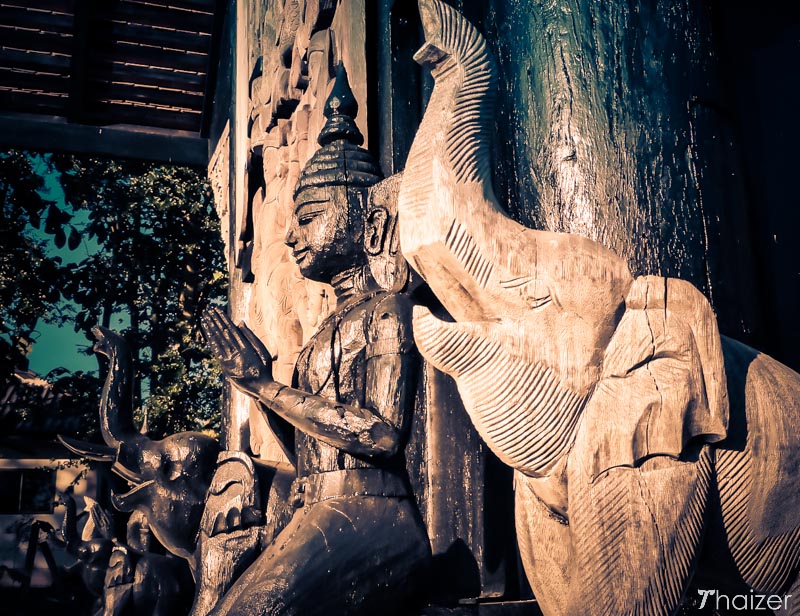 Apparently, other structures have been used by members of royalty for meditation and they remain closed to the public. Although not everything is open, the garden makes for a pleasant stroll and the mix of funky white igloos and dark-coloured traditional Thai structures provides plenty of talking points. And don’t miss out the unique rest-rooms and toilets with their buffalo horns and animal skins providing an unusual backdrop. 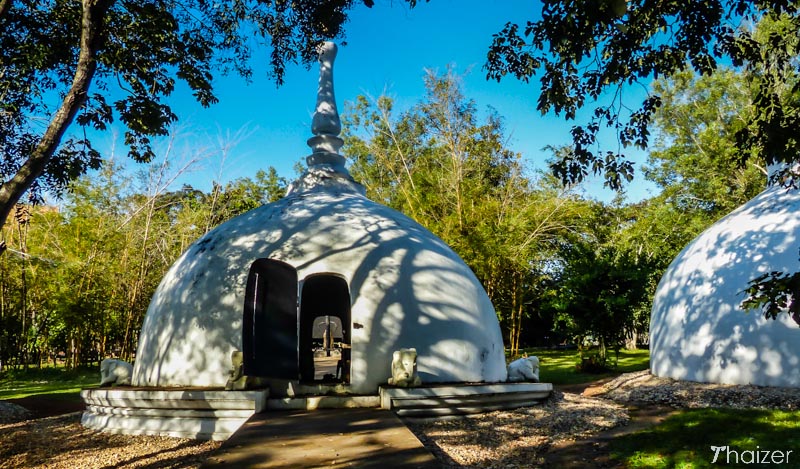 Thawan Duchanee is now lauded as a national artist of Thailand, but his controversial work hasn’t always been popular. Born in Chiang Rai province in 1939, Thawan went on to study art in Bangkok and Amsterdam. Some of his early work shocked a conservative Thai nation and accusations of disrespecting Buddhism resulted in some people physically attacking his paintings. Fortunately, Thawan’s art was championed by leading figures in Thai society including Kukrit Pramoj. Thawan went on to showcase his work all over Thailand and around the world. His murals feature at a number of overseas Thai embassies and a number of prominent Thai companies have commissioned work from him for display in their head offices. 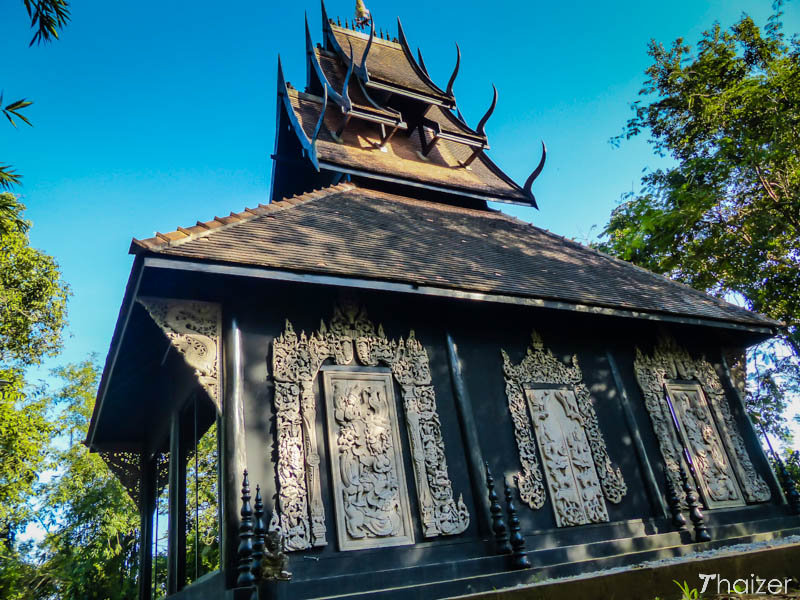 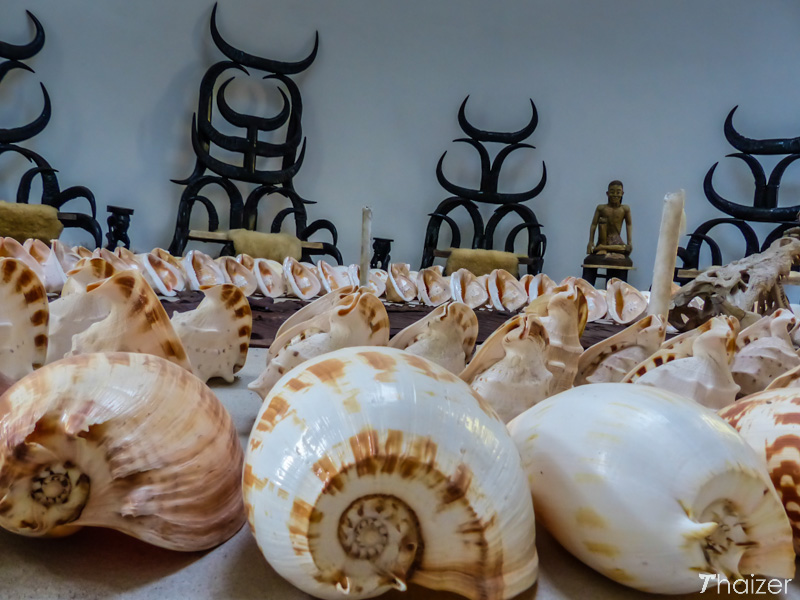 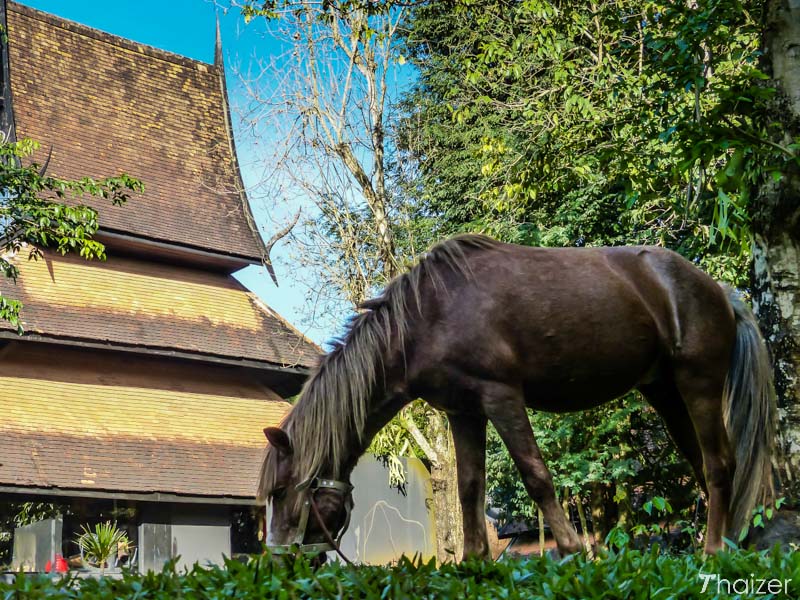 How to get to the Black House

There are a number of options to get to Baan Dam. If you don’t have your own transport you could book a trip from any Chiang Rai tour office. Price will vary depending on whether you want to visit as a shared or private tour. Shared tours often combine the Black House with a visit to the White Temple (Wat Rong Khun) but your time at each may be limited so if you don’t want to be rushed, either arrange a private tour or organize your own transport. The cost of a tuk-tuk from Chiang Rai to the Black House will vary depending on your negotiating skills, but expect to pay at least 300 Baht return. You can also organize a taxi-meter or if you want to combine it with a trip to other attractions in and around Chiang Rai, hire a car with a driver for the day. If I was with friends or family, I would choose the option of hiring a car with driver or use a taxi-meter. 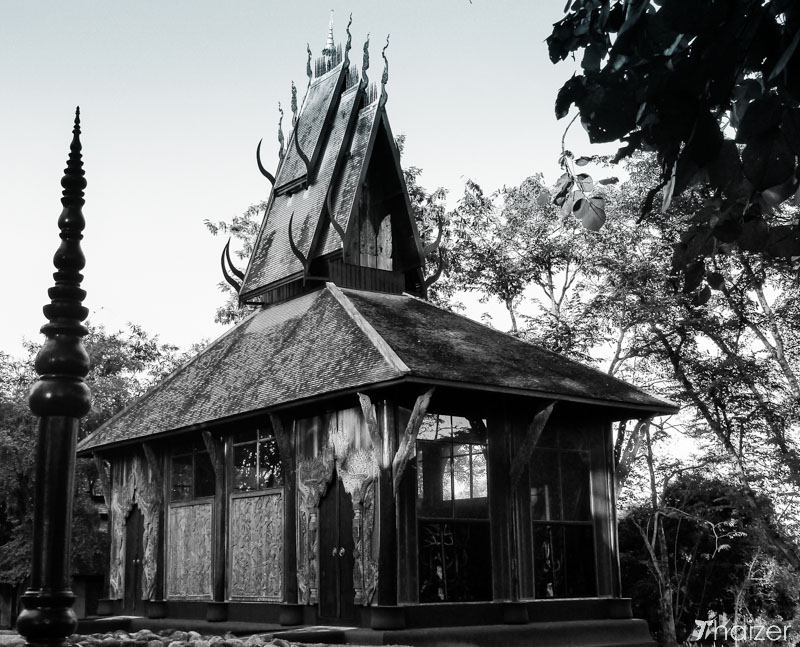 On my recent visit to Baan Dam I used the public bus which is the cheapest option to get there, but it does involve a little bit of walking and waiting around so won’t suit everybody. If you want to try this you need to go to the old bus terminal in the middle of Chiang Rai (adjacent to the Night Market). Take the local/ordinary bus (pictured below) which goes to Mae Sai and usually leaves from platform 5 with regular departures throughout the day. Make sure you tell the conductor you are going to Baan Dam. The cost of the ticket is paid on the bus and is currently 18 Baht so try to make things easier for the conductor by having the right money or a 20 Baht note handy. 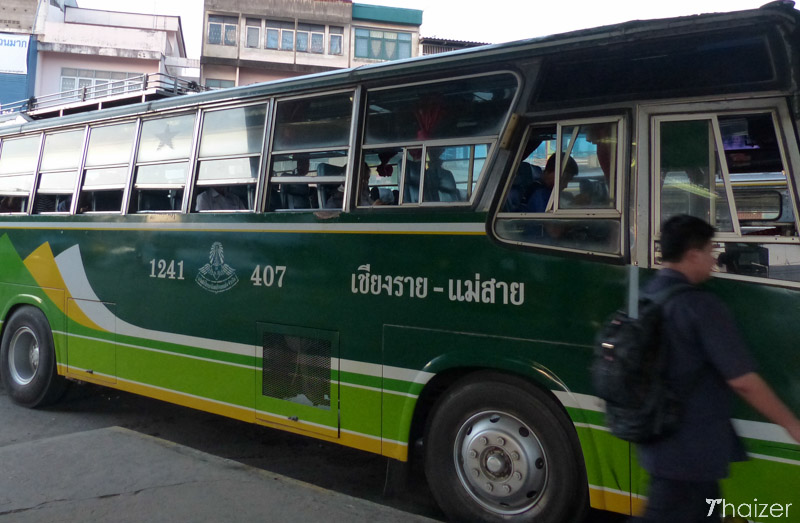 The bus takes Highway 1 (Thanon Phaholyothin) which is the main road out of Chiang Rai towards Mae Sai and takes around 20-25 minutes before you reach the drop-off point for the Black House. You will travel past Chiang Rai University on the left-hand side and approximately 5 minutes after that the bus will stop on the side of the road and the conductor will tell you ‘Baan Dam’ and you’ll see the lane you need to walk along. You then have two options depending on whether you want to enter via the back or front entrance to Baan Dam (the shorter route is to the back entrance). If you walk along the lane for about 50 metres you will see the temple-like structure of Baan Dam come into view above the trees to your left. You’ll also see a sign (pictured below) which has the number 13 on it. The writing is all in Thai, but what you need to know is that this is Soi 13 and leads to the back entrance of Baan Dam. 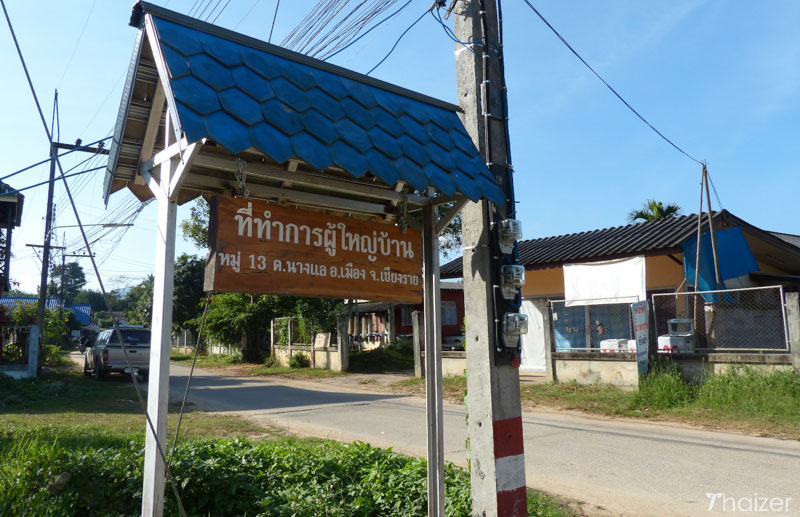 If you turn left at this sign you follow what looks like a country path going into the middle of nowhere, but after around 7-10 minutes walk you will come to a small clearing that leads to the rear entrance of the Black House. Alternatively, instead of walking down that track you can walk straight on when you see the sign above and follow the paved road round for approximately 400 metres before then turning left into a small soi which brings you to the front entrance of Baan Dam. If you have your own motorbike this latter option may be better. To catch the bus back to Chiang Rai you need to retrace your footsteps and then walk across the main road to the opposite side of the highway where you were dropped off earlier. There is no bus stop here, but you can flag the local bus down by waving your hand in a downwards motion. You shouldn’t have to wait more than 30 minutes for a bus back to Chiang Rai. In addition to the local buses, look out for the silver mini-buses (operated by the Green Bus company). Not all of these will stop because they are usually full already with passengers who have got on at Mae Sai, but they may sometimes have room for additional passengers and will stop if you flag them down.

Baan Dam is open daily (including weekends and holidays) from 09.00 to 17.00 but is closed for lunch from 12.00 to 13.00. There is plenty of parking opposite the front entrance where you will also find a souvenir shop, food stalls and a coffee shop. *.

*Update: From December 1, 2016 Baan Dam will charge an entry fee of 80 Baht for all visitors (same price for Thais and non-Thais).