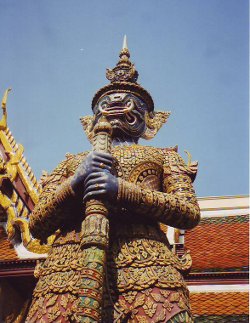 Thailand’s capital city has the distinction of owning a number of different names. In addition to the internationally known name of Bangkok, there is also the local name of Krung Thep (City of Angels) which is a shortened version of the official Thai name of Krung Thep Maha Nakhon. However, even this is an abbreviation of the full ceremonial name which lays claim to being the longest place name in the world. The full ceremonial name is:

Because the ceremonial name is a mixture of the ancient Pali and Sanskrit languages there are differing translations for the meaning and there are also different ways of writing the name in English. A general translation of the name is:

The great city of angels, it’s where the immortal divinity dwells, the invincible city, the royal capital endowed with nine precious jewels and full of joy, it is abundant with enormous royal palaces, it’s where the reincarnated angels reside, at the order of Inrda, Vishvakarma majestically built the capital.

The ancient Siamese capital city of Ayutthaya was destroyed by an invading Burmese army in 1767. This led to King Taksin founding a new capital for Siam in a location known as Bangkok. The exact derivation of the name Bangkok is open to debate although many scholars believe it to mean the ‘village of wild plum trees’. The new capital was built on the west banks of the river (now called the Chao Phraya River) at Thonburi. In 1782, King Rama I moved the capital to the opposite side of the river at Rattanakosin which is where many of Bangkok’s historical sites can be found including the Grand Palace and the Temple of the Emerald Buddha. It was King Rama I who gave the new capital its ceremonial name although this name was to be further embellished by King Mongkut (King Rama IV).

The name of the original location, Bangkok, remained in use by overseas traders in Siam and lasted through the years as the country transformed into Thailand. Today, most Thai people refer to the city as Krung Thep, but when speaking with non-Thai people Bangkok may also be used interchangeably.