Bringing a whole new meaning to the phrase ‘the elephant in the room’, the Elephant Parade House in Chiang Mai is a unique venue that I personally recommend putting on your must-see list if you are planning a trip to northern Thailand. Part boutique, part workshop, part learning centre, but completely sanuk, the Elephant Parade House is full of elephant statues of all shapes, colour and sizes. Not just an entertaining place to visit, but by taking part in one of the art workshops or simply buying one of the beautiful replica statues for sale, you will actively be playing your part in elephant conservation. 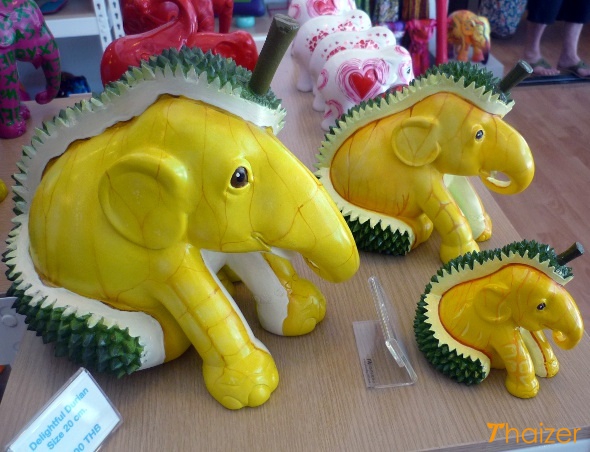 What is the Elephant Parade?

Since its inception, Elephant Parade has created around 1,000 life-size decorated elephant statues which have been showcased on the streets of various cities around the world. These unique works of art by Thai and international artists have brought colour and smiles to the streets of Amsterdam, London, Singapore, Milan and Copenhagen amongst others. Once the open-air exhibition is over, most elephants are auctioned off with part of the proceeds from the auctions and sale of merchandise donated to The Asian Elephant Foundation. This is what Elephant Parade has to say about their aims:

“It is the mission of Elephant Parade to become the world’s largest support organisation for the Asian elephant, threatened with extinction. The open air art exhibitions create worldwide attention, public awareness and support for the cause of elephant conservation: the elephant statues never go unnoticed by the wider public and mass media.” 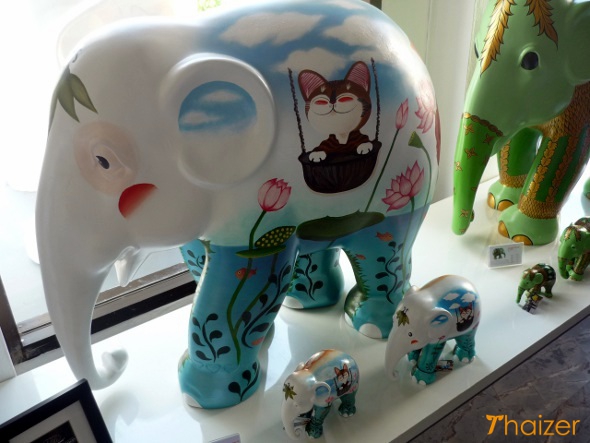 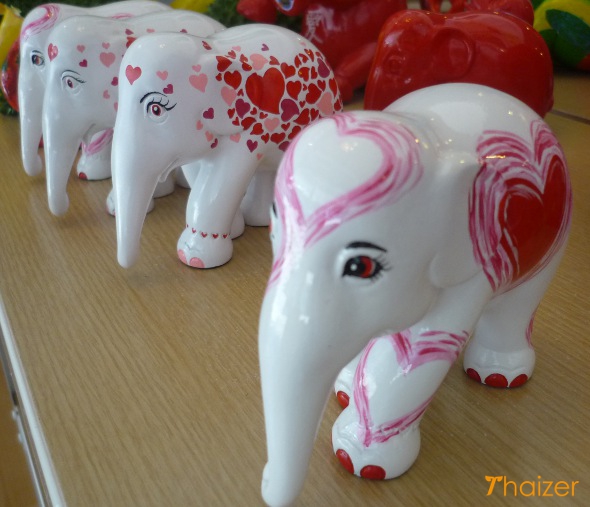 The Founders of Elephant Parade and Mosha’s Story

Father and son team Marc and Mike Spits are the founders of Elephant Parade. It was a chance meeting that saw Marc introduced to a baby elephant that had lost its right leg after stepping on a landmine. That elephant was named Mosha. In 2007, the then 3-year old Mosha became the first elephant in the world to be fitted with an artificial leg. So moved was Marc by Mosha’s story that he wanted to do something for her and others like her. The idea of Elephant Parade was formed, a social venture that would raise revenue and increase awareness of the plight of the Asian elephant. A statue of Mosha alongside one of the prosthetic legs that she outgrew sits proudly close to the entrance of the four-storey Elephant Parade House. 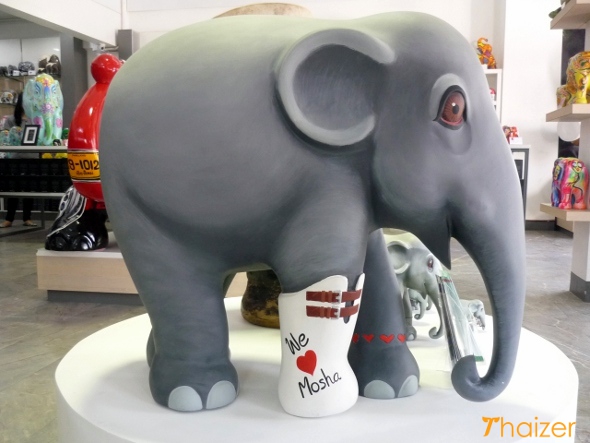 Statue of Mosha – the elephant who inspired the Elephant Parade

If you like the idea of bringing out your inner Rembrandt, try your hand at one of the art workshops. You will be provided with a blank model of an elephant and all the brushes and paints you need to bring your creation to life. Once it’s complete you get to take it home with you. This is a fantastic idea, especially if you are visiting Chiang Mai with children. At the time of writing, a 10cm elephant will cost 600 Baht and a 15cm one is 1,000 Baht, but there is 50% off for children. Art boxes are also available to purchase as gifts. 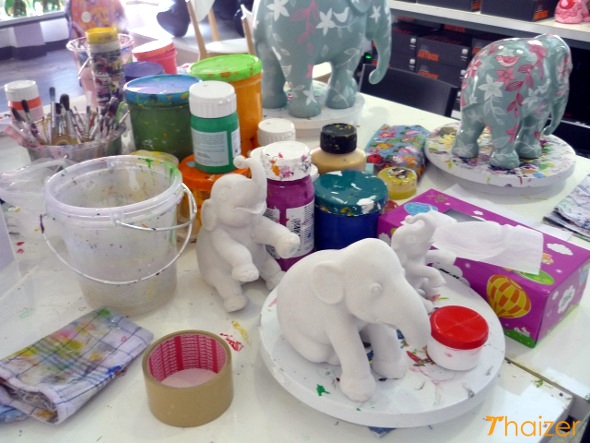 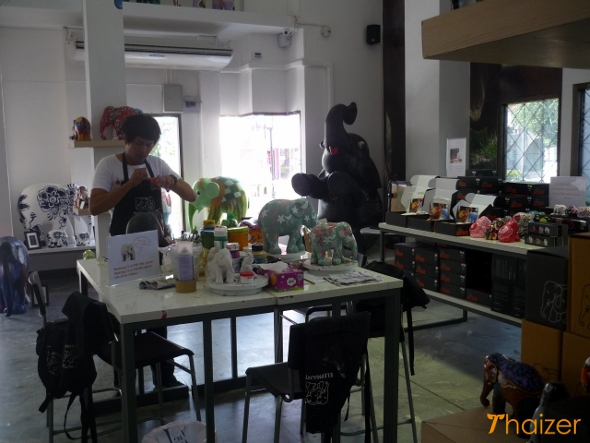 One of the professional Elephant Parade House artists at work

The province of Chiang Mai is an area of Thailand with a close affinity to elephants and the city itself is also known for its community of artisans making it the natural fit for the Elephant Parade House. 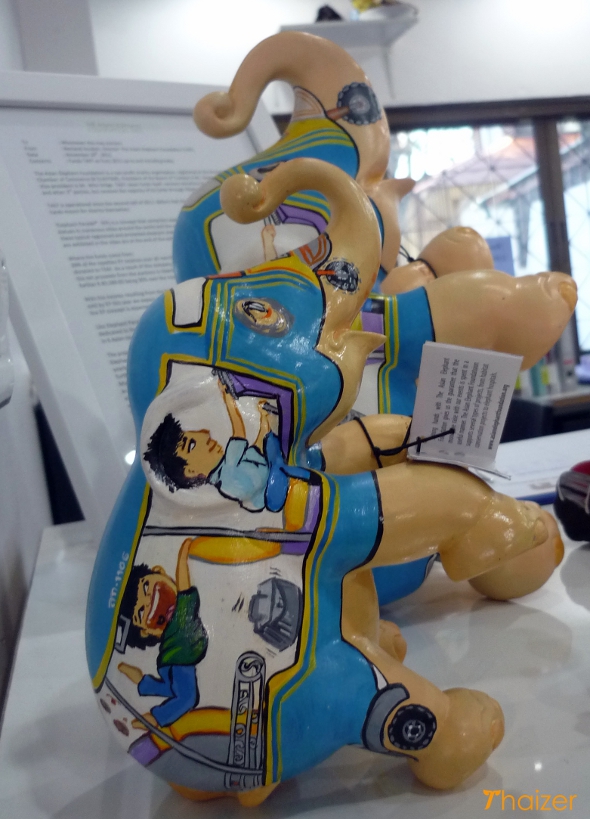 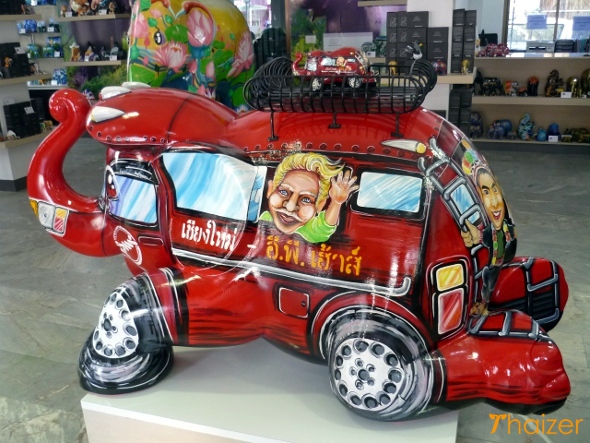 What do you get if you cross an elephant with a songthaew . . . ?

Where to Find the Elephant Parade House

Update December 2016:
A new venue called Elephant Parade Land has opened to the east of the Lanna Golf Course. But on the Elephant Parade website, they still show the Wat Gate outlet as the main address.

For more news and details on the Elephant Parade itself, see their main website here which has news of upcoming displays and events.

News and information on The Asian Elephant Foundation

Where to buy the Replica Elephant Statues

The elephant replicas are available in a range of sizes and designs. If you are visiting Chiang Mai, you can purchase in person from the Elephant Parade House. If you can’t make it to Chiang Mai in person, Elephant Parade also have an online store which ships international orders.

When I visited recently with my family, we were the only ones there and the assistants kindly agreed to let me take photographs inside. If you want to take photos at the Elephant Parade House, please ask permission first.