At first glance, the Erawan Shrine (known in Thai as Saan Phra Phrom) might seem to be in an incongruous setting with its backdrop of hotels, shopping malls, busy roads and skytrains and it’s easy for tourists to pass this Bangkok landmark without realising it. 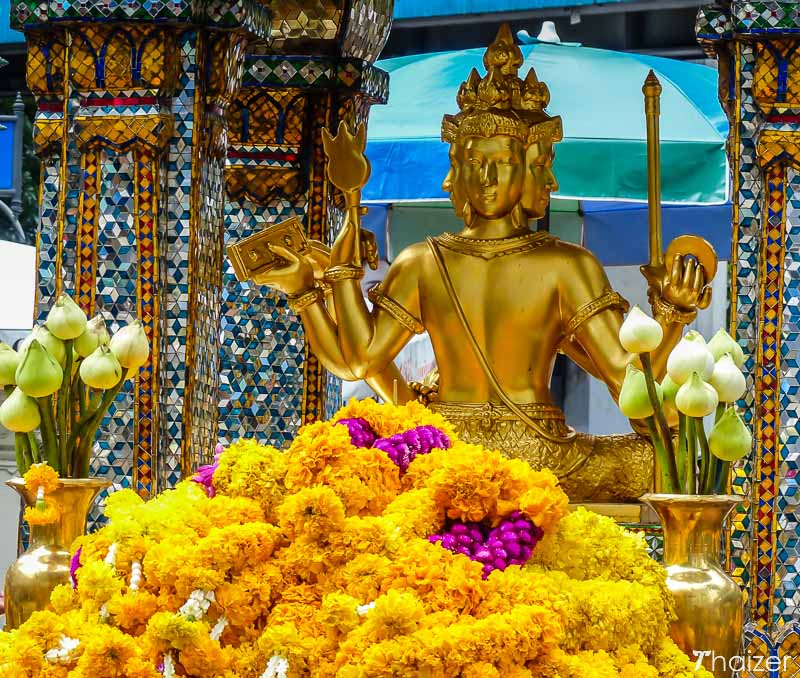 The shrine is in honour of Brahma, the Hindu god of creation who is known in Thai as Phra Phrom. In Thai Buddhism, Brahma is believed to be the deity of good fortune and protection and worshippers will usually place offerings in front of each of Brahma’s four faces. Typically, offerings will be candles, incense and garlands of marigolds and jasmine. Miniature figures of elephants are also placed because Brahma was said to have ridden a three-headed elephant named Erawan. At the shrine in Bangkok there is always a troupe of classical Thai dancers on hand because Phra Phrom is thought to like Thai classical music and dance. Worshippers will sometimes hire the dancers in the hope that it will bring them good fortune or they may pay for the dancers as a thank you when prayers are answered or good fortune is received. 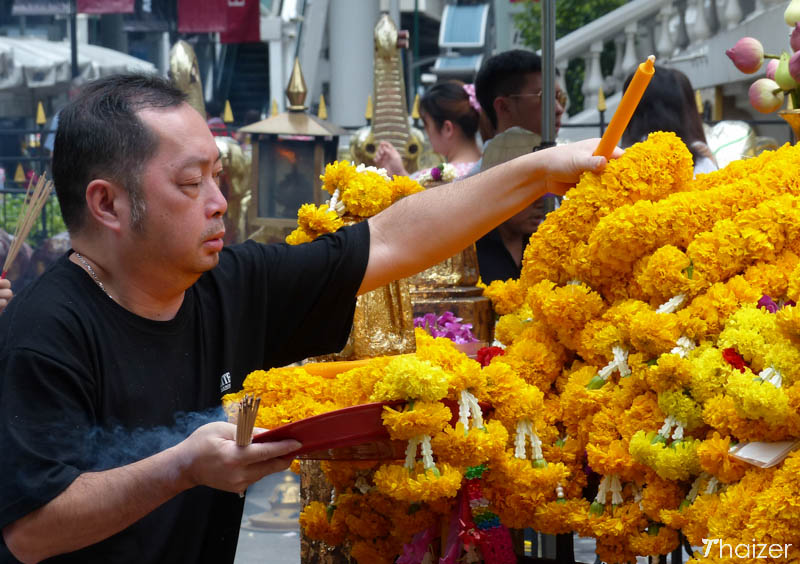 In the 1950s, construction work began on a new hotel close to the Ratchaprasong Intersection, but the Erawan Hotel project was plagued with a series of problems including accidents and fatalities. This being Thailand, the natural course of action was to call in the local spirit doctors and astrologists to find out what was going wrong. It was decided that when the original foundation stone of the hotel was laid, it was not done so at the correct auspicious time. To rectify this error and to placate the spirits of the land, a new spirit house and a shrine to Brahma (Tao Mah Brahma) needed to be built. The Thai Fine Arts Department commissioned a plaster sculpture which was covered in gold leaf and put in place in a prominent position outside the hotel on November 9, 1956. With the shrine and spirit house in place there were no further construction problems. The original Erawan Hotel was demolished in the 1980s and the site is now home to the Grand Hyatt Erawan Hotel. Because the shrine is associated with the original Erawan Hotel it is still referred to as the Erawan Shrine in guide-books and on maps although most Thai people will refer to it as ‘Saan Phra Phrom’.

In March 2006, a Thai man attacked the statue of Phra Phrom with a hammer. The late-night attack resulted in most of the statue being destroyed before the man fled. Bystanders who witnessed the desecration were so enraged that they gave chase to the man and beat him to death. Subsequent inquiries suggested the man who attacked the statue was mentally ill. Because of the belief in spirits and omens in Thailand there were dark rumblings at the time of the incident about black magic and various conspiracy theories relating to politics in Thailand. A new statue of Phra Phrom was placed inside the shrine in May 2006. 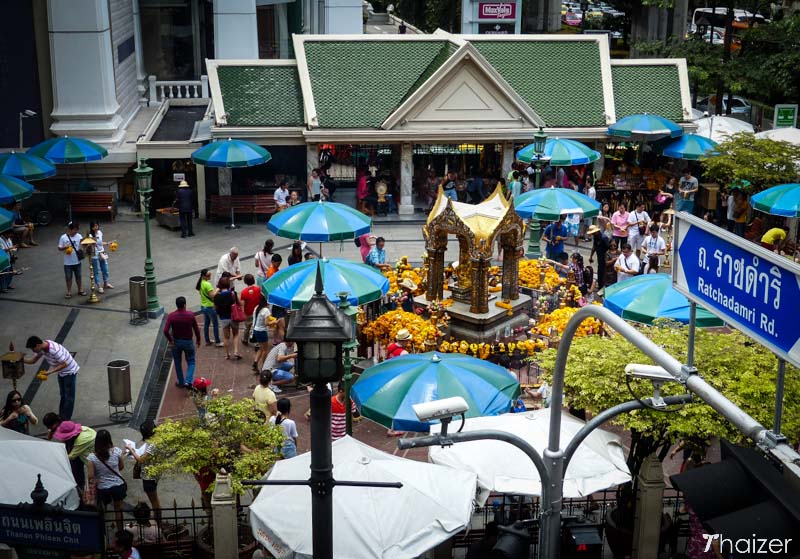 The Erawan Shrine is located adjacent to the Grand Hyatt Erawan Hotel at the corner of Ploenchit and Ratchadamri roads (known as Ratchaprasong Intersection). The nearest Skytrain station is Chitlom from where there is an elevated walkway through to the Ratchaprasong shopping district and malls such as Zen and Central World. The walkway provides a good aerial view of the shrine and the crowds that gather there. Gates to the shrine are open daily from 06.00 to 22.30 with free entry.