A trip to Jim Thompson’s House had long been on my ‘to do’ list, but it was only on my last visit to Bangkok that I finally got round to it. I can be a cynical old so and so and I actually surprised myself at how much I enjoyed the whole afternoon.

For those readers that don’t know the story of Jim Thompson, he was the American expat who has been credited with reviving the Thai silk industry in the 1940s. Thompson’s life story makes for a compelling read; architect, adventurer, entrepreneur, art collector, socialite and military intelligence officer with the O.S.S. (a forerunner of the C.I.A) before his mysterious and still unresolved disappearance on March 26th 1967 when out for a walk in Malaysia’s Cameron Highlands. 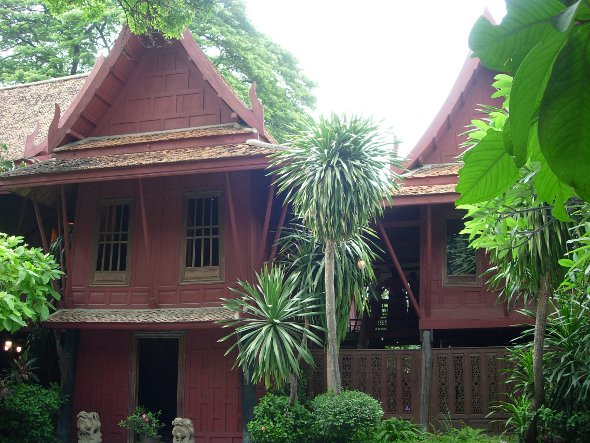 The House and Museum

Thompson’s legacy remains very much in force with the world-renowned Thai silk industry of today indebted to the American’s foresight and hard work. His magnificent former home and grounds now form a museum, open daily from 09.00-17.00. Jim Thompson’s House is a testament to Thai tradition and craftsmanship and provides an oasis of calm and tranquillity in the midst of Bangkok’s hustle and bustle. Most of the buildings are over 200 years old and were dismantled from other locations in Thailand before being transported by barge, piece by piece, and lovingly reassembled on their present site.

The intimate nature of the buildings and the value of the artworks on display mean that unattended viewing is not allowed. For an entrance fee of 100 Baht, regular and frequent guided tours are available in a number of languages (including English, Thai, French and German). My one criticism is that the tours can seem a bit rushed. However, given the layout of the buildings it is not practical to have large groups of people lingering in any one spot at a time. On my particular tour the guide declared, ‘Please feel free to take your time and look around’ before in the next breath saying, ‘This way please to the next room.’ It was typically Thai in its contradiction, but the young guide was so charming that everybody just laughed and did exactly as she said! 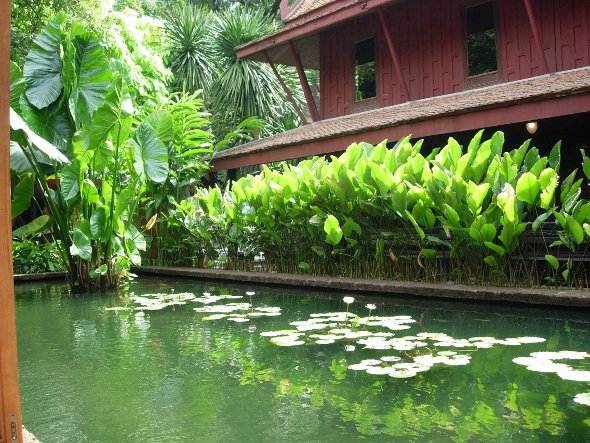 Bags have to be deposited in attended lockers before the start of the tour. Cameras can be taken with you, but photographs are not permitted in the main buildings themselves. Pictures can be taken in the grounds and in some of the smaller buildings. There is a very pleasant (and comparatively expensive) coffee shop and restaurant within the grounds. Of course, no visit would be complete without a trip to the excellent store where the entire range bears the hallmark of Jim Thompson quality.

Getting To Jim Thompson’s House

Most hotels will be able to arrange transport via tuk-tuk or taxi-meter. Independent travel is just as easy and will certainly be cheaper. Take the Skytrain to National Stadium station and follow the exit signs marked for Jim Thompson’s House. There is a signpost at the top of the soi leading to the house. The house is a 5-minute walk from the Skytrain stop. Ignore (or just smile) at the almost inevitable and plausible individual who tells you, ‘Jim Thompson House closed today’. It is just a ruse to try and get you to take the conveniently parked up tuk-tuk and embark on a ride around various tailors’ and jewellers’ shops for which the driver receives commission.