Maya Bay is amongst the most photogenic of Thailand’s beaches. The natural beauty of the area is undeniable with towering limestone cliffs, clear waters, coral reefs and a white sandy beach. It is also located on uninhabited Phi Phi Leh so in theory ticks all the boxes for the perfect hideaway, tropical beach paradise. However, it is these same reasons that means Maya Bay is no longer a secluded paradise and on a daily basis, dozens of boats carrying day-trippers from Phuket and Krabi descend on the beach here. 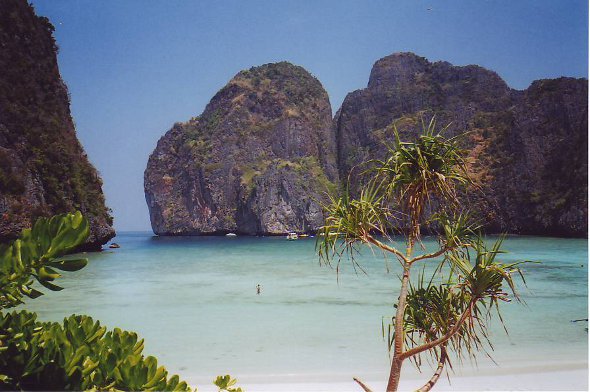 The busiest time for the tourist boats in the bay is generally from late morning until early afternoon. Some visitors take the view that sharing the beach with so many other sightseers is a minor inconvenience to enjoy such stunning natural surroundings. Others may dismay that the picture-postcard scene of a deserted bay with just one or two longtail boats in view is an impossible dream. If you do want to experience the beauty of the bay with fewer crowds then you should avoid lunchtime and aim to visit early morning or later on in the afternoon. The easiest way to do this is if you are staying on neighbouring Phi Phi Don. From there you can hire a longtail boat and go at a time that suits you and which avoids the most crowded times of the day. Visiting during low season (May to October) will also mean fewer people, but the trade-off is that the seas can be rougher during this time.

Another way to avoid the crowds is to camp overnight on Phi Phi Leh. This is something which can be arranged via most tour operators on Phi Phi Don and also some in Krabi. The numbers are restricted to small groups each evening and the itinerary also includes snorkelling and dinner as well as overnight camping.

Please note that Maya Bay is part of a National Park area and the entrance fee is/was 200 Baht per person for foreign visitors. If you are visiting as part of an organised tour, the amount you pay will normally include this fee and you won’t have to pay it separately. If you are hiring your own longtail boat, the boatman may or may not ask for this as a separate fee or he may already have factored it into the price he quotes you. Just establish beforehand what the situation is, although with language difficulties this may not be easy. 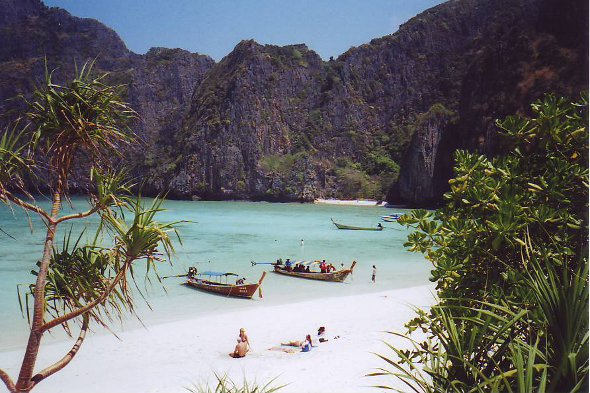 It was the stunning natural beauty of Maya Bay that attracted movie producers to its shores in late 1998 as filming commenced for The Beach. Based on Alex Garland’s book of the same name, the film version was directed by Danny Boyle and starred Leonardo DiCaprio.

Produced by Twentieth Century Fox, the filming of The Beach attracted a lot of controversy. To fit their stylised version of a beach paradise, Fox cleared some vegetation from Maya Bay and added some palm trees. Small diggers were also brought in to flatten some sand dunes. These changes were made with the co-operation of Thai authorities, but environmentalists argued that the changes made would adversely affect the natural eco-system of the bay. Once filming was complete, Fox say they restored the bay to how it had looked beforehand, but some environmentalists disagreed. As the arguments and counter-arguments continued it was, ironically, a natural disaster that restored the sand dunes to Maya Bay. Local experts say the 2004 tsunami restored the natural eco-system of Maya Bay and other parts of Phi Phi.