Described by the owners as a ‘140-acre cultural theme park’, Phuket Fantasea (written as FantaSea by the owners) has rapidly established itself as one of the most popular visitor attractions on Phuket island. Built at a cost of over USD 100 million, the Fantasea venue at the northern end of Kamala Beach is home to an impressive 3,000-seat theatre and a huge 4,000-seat dining facility. It’s fair to say that Phuket Fantasea is aimed primarily at tourists, but that shouldn’t detract from what can still be a highly entertaining and memorable evening. 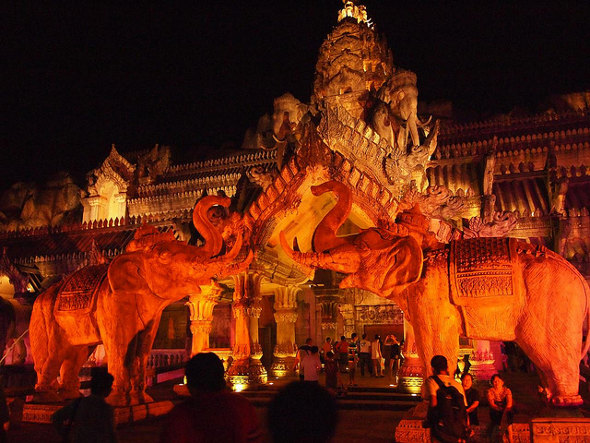 The highlight of Phuket Fantasea is undoubtedly the spectacular show which features a cast of hundreds, flying acrobats, elephants, circus performers, glamorous costumes and pyrotechnics. The video clip below gives you a good idea of what you can expect.

Phuket Fantasea hosts a couple of different types of buffet dinner. The standard buffets serves a range of Thai and international dishes, but for an additional surcharge a seafood buffet is also available. Whichever option you choose, it’s still likely to be busy (especially in the tourist high season) but considering the amount of people it’s usually well-organised and efficiently run. 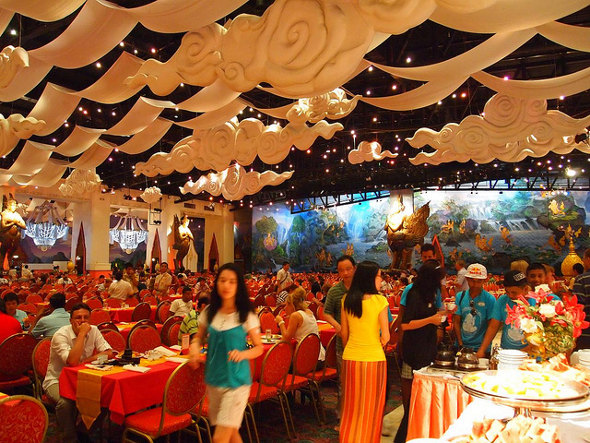 The organisers say that no cameras are allowed inside the theatre and visitors are asked to check mobile phones and cameras into secure lockers before entering the show. There are staff who monitor the crowd to see if cameras and/or recording equipment is being used but it’s also clear that some visitors do sneak photos and video clips without being spotted. If you want to follow the rules but still want a photo with you and one of the cute animals or extravagant performers, you’ll need to splash the cash to one of the official Phuket Fantasea photographers.

Photos are permitted outside of the main theatre and there are still enough photo and posing opportunities available to keep most visitors satisfied.

All ticket prices include entrance to the Phuket Fantasea park which also hosts shops and amusement arcades together with parades and live music performances.

Full details and current prices are available from the official Phuket FantaSea website.

Tickets can be purchased online via the Fantasea website (see below) or from any tour or travel agent on Phuket island.

Fantasea is located just off the main road at the northern end of Kamala Beach. From Patong it’s approximately a 10-minute drive and from Phuket Town it’s 30 minutes. The venue offers round-trip transfer (non-private) to any hotel on the island at cost of 300 Baht per person.

Read advice on where to stay on Phuket island »