The year 2006 was an auspicious one for Thailand. It marked the 60th anniversary of the succession to the throne by His Majesty King Bhumibol Adulyadej. As part of those official celebrations (which continued into 2007 for the king’s 80th birthday), a grand flower festival was held under the name Royal Flora Ratchaphruek 2006 with almost 4 million visitors attending the three-month long expo. Following the conclusion of Royal Flora 2006, the 80-hectare gardens were re-opened to visitors and they make for a very pleasant half-day visit if you are in the Chiang Mai area. 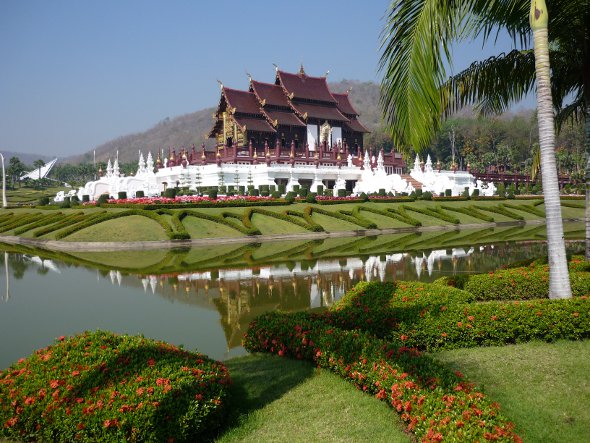 If you arrive early enough it is possible to hire bicycles to get around the various displays. If that sounds too energetic, there is a hop-on/hop-off electric bus (20 Baht for adults) that gently trundles its way around the grounds. I last visited with my family on a weekday at the start of this year and there was just a handful of visitors enjoying the landscaped gardens. However, at the moment the grounds are being revamped and prepared for more landmark royal occasions. Royal Flora Ratchaphruek 2011 will be held to honour the 84th birthday of His Majesty the King (the start of his 7th birthday life cycle), the 80th birthday of Her Majesty Queen Sirikit and the 60th birthday of HRH Crown Prince Maha Vajiralongkorn.

The gardens are named after the national flower of Thailand, the vibrant yellow-coloured ratchaphruek.

This major flower festival will be held over 99 days (9 is a lucky number in Thailand) from December 14 2011 until March 14 2012* and is a great opportunity for visitors to Chiang Mai to witness these beautiful gardens at their best. Featuring local and international varieties of plants and flowers, the event will be one of the major attractions of the numerous royal celebrations being held in Thailand over the next twelve months.
< div class=”content-box-yellow”>*Update: October 22, 2011
Because of the flood situation elsewhere in Thailand a decision has been taken to postpone Royal Flora for a month. The event will now be held from December 14, 2011 – March 14, 2012 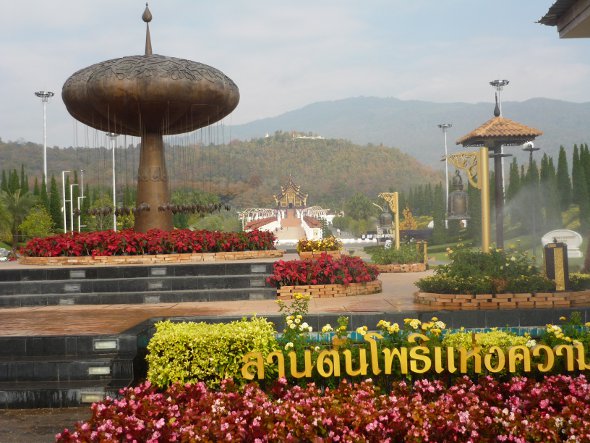 During the festival, visitor numbers will be restricted to a maximum of 20,000 per day. Tickets will be priced at 200 Baht for adults and 100 Baht for children, students, disabled and seniors (over 60). Any tour office in Chiang Mai will be able to arrange tours or transport for you to the exhibition which is located approximately 15-20 minutes’ drive from downtown Chiang Mai. Alternatively, you can negotiate a deal directly with the driver of a songthaew (the red share taxis) to take you there and back which can be a very good option if there are a few of you in your group. Shuttle buses are also scheduled to run during the festival period from various locations including Central Airport Plaza, Chiang Mai Airport, Kad Suan Kaew shopping mall and Chiang Mai train station. The grounds are likely to be busiest at weekends with Thai tourists from all over Thailand expected to visit the expo. Highlights of Royal Flora Ratchaphruek 2011 will include the giant flora wheel and the royal pavilion. Although any day during the expo will be a good day to visit, there are a number of special days taking place during the 99 day festival including Loy Krathong, His Majesty’s birthday (December 5) and Valentine’s Day. The normal opening hours for the gardens are from 08.00 to 18.00 but during Royal Flora 2011 that will change to 09.00 to 21.00 (22.00 at weekends) with special events and concerts scheduled to take place on selected evenings and an illuminated garden close to the entrance. 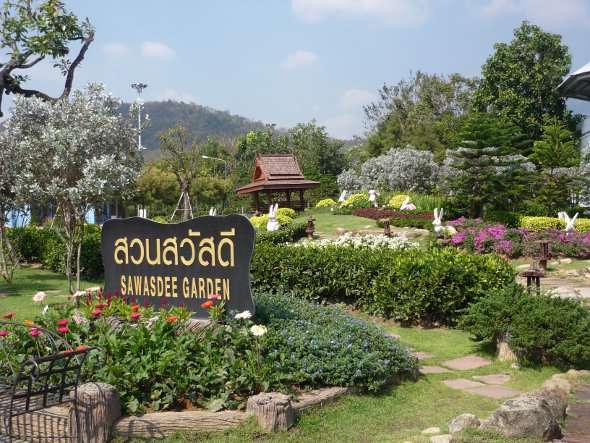 I would also recommend combining a visit to the gardens with a trip to the mountain-top temple at Doi Kham which is located on the hill behind Royal Flora Ratchaphruek. The temple features a giant sitting Buddha and also offers lovely views over the gardens and Chiang Mai.
Official website for Royal Flora 2011 »