When the kingdom of Sukhothai rose to prominence, Si Satchanalai was built as a satellite city because of its strategic location. Almost 60 kilometres apart, the two cities were linked by the road known as Thanon Phra Ruang which is considered by some Thai historians to be the first highway in Thailand. Founded in 1250, Si Satchanalai was built on the banks of the Yom River and protected by two hills which provided lookout points to scout for enemies. As the city grew, stone walls and a moat were added to provide further protection and princes from Sukhothai were sent to Si Satchanalai to rule this important city in the Sukhothai kingdom.

Although Si Satchanalai is closely associated with the Sukhothai period of Thai history, Archaeological finds in the historical park suggests the location was inhabited as early as the 3rd and 4th centuries when the area was known as ‘Chaliang’. Visitors to the park can also see some Khmer-style ruins which pre-date the Sukhothai period. And when the Sukhothai kingdom fell, Si Satchanalai remained an important strategic location with the rival Ayutthaya and Lanna kingdoms battling on various occasions for control of the city. 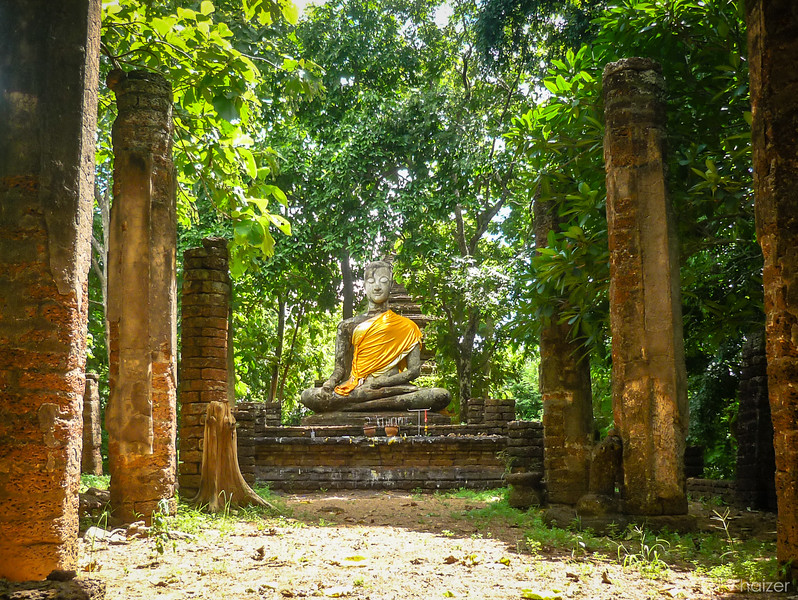 Si Satchanalai and the associated historical parks at Sukhothai and Kamphaeng Phet are listed by UNESCO as World Heritage Sites and are maintained by the Fine Arts Department of Thailand in association with UNESCO. The three locations are recognised for their importance as part of the original Thai kingdom and for their lasting legacy to Thai architecture and the arts.

During the 14th to 16th century, the area around Si Satchanalai (known today as Sawankhalok) was an important producer of Celadon and ceramics which were exported throughout Asia. The unique pottery produced by the kilns here was called ‘Sangkhalok’ and reflected influences from the kingdoms of Sukhothai, Ayutthaya and Lanna. Sangkhalok kilns, thought to be the oldest in Thailand, are approximately 5km away from the main Si Satchanalai Historical Park at Baan Koh Noi.

What to see at Si Satchanalai

There are numerous temples, Buddha statues and shrines in and around Si Satchanalai Historical Park and if you’re staying in Sukhothai many guest houses will provide you with information and maps too (recommended guest-house, At Home Sukhothai).

The best way to visit the park is to hire a bicycle and simply explore and enjoy at leisure. There are signs in English and Thai for the main sites explaining their history and significance. Part of what makes Si Satchanalai so special is randomly stumbling across centuries old statues as you cycle around. These statues may have no name plaques, but sitting in splendid isolation in the beautiful rural setting they are an evocative sight. 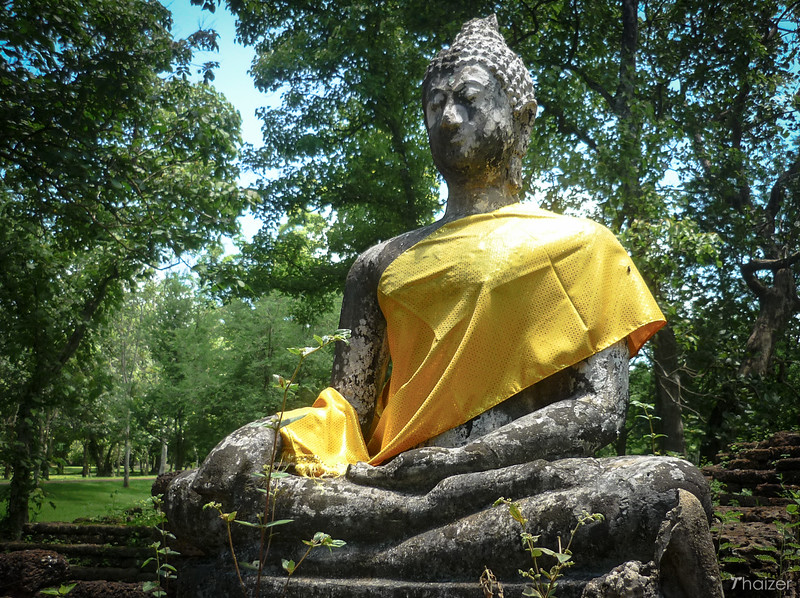 If you’ve taken the bus from Sukhothai (see details further below), the first temple that greets you when you cross the suspension bridge is Wat Phra Si Rattana Mahathat. This impressive temple lies outside the main historical park and the entrance fee is 20 Baht. 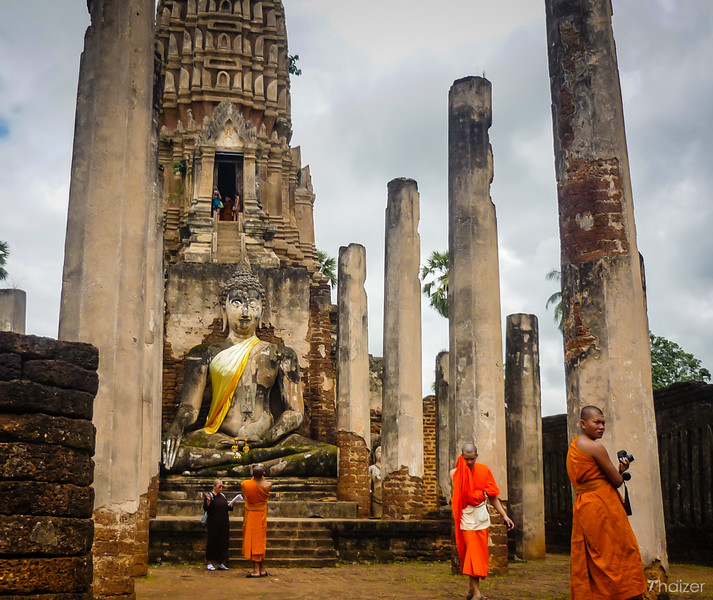 Within the grounds of the historical park, significant sites worth looking out for are: 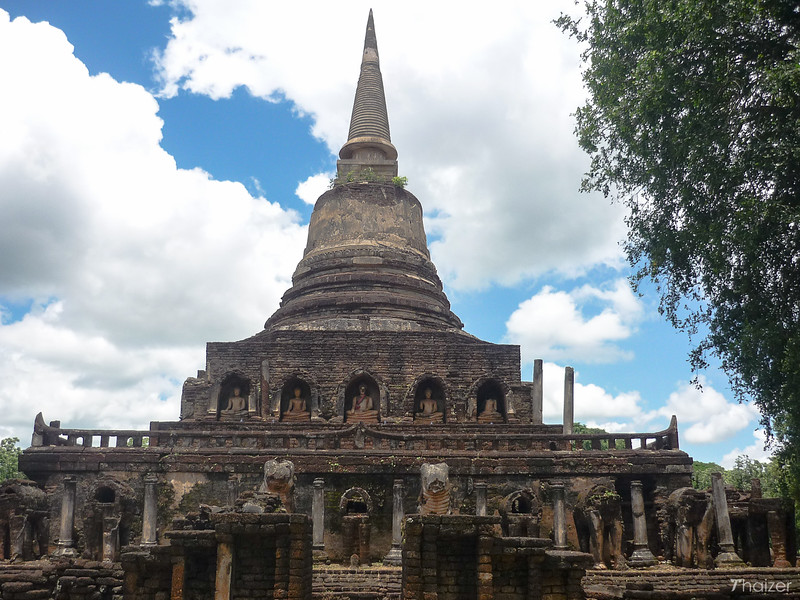 How to get to Si Satchanalai Historical Park

Si Satchanalai Historical Park is located on the bank of the Yom River approximately 55 km from Sukhothai. If you don’t have your own transport you can arrange a private tour from Sukhothai, but it’s also quite easy to arrange by yourself if you are an independent traveller. Buses depart from the main bus station in Sukhothai new town. Even if you don’t speak Thai, if you tell the person at the ticket counter you are travelling to Si Satchanalai Historical Park they will probably understand. There is usually a dedicated member of staff on hand at Sukhothai bus station who is there to help tourists so you shouldn’t have any problems. You could also ask your hotel or guest-house to write down the name ‘Si Satchanalai Historical Park’ in Thai for you before you go to the bus station.

One of the most convenient options is to take the Sukhothai to Chiang Rai bus. Departure times may change, but WinTours currently have departures leaving at 06.40, 09.00, 10.30 and 11.30am. The fare is approximately 50 Baht. The conductor will let you know when you have reached Si Satchanalai (it takes approximately 1 hour) and the bus will drop you by the side of the road. You should see a pink-coloured gateway and to the left of that a small shop where you can rent a bicycle (20 or 30 Baht). From here it is 3km to the entrance to the main Si Satchanalai Historical Park. 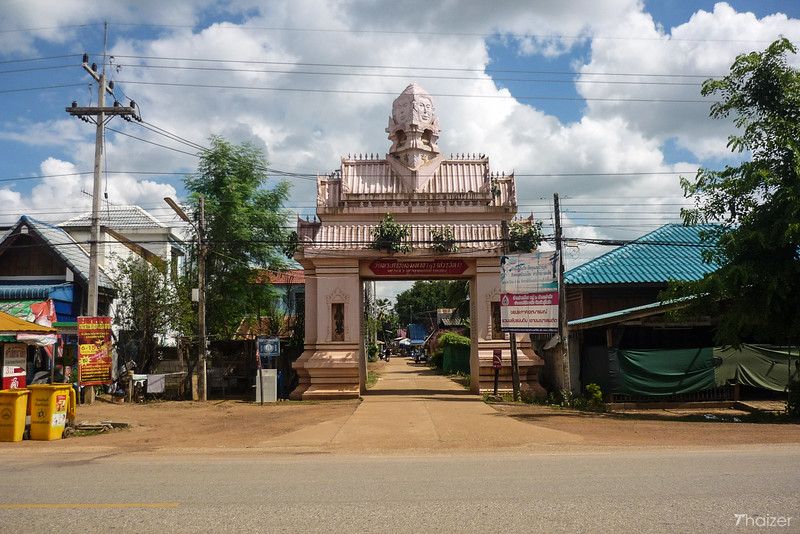 Head through the gateway and you’ll cycle past small shops and homes before coming to a rickety looking suspension bridge over the river. 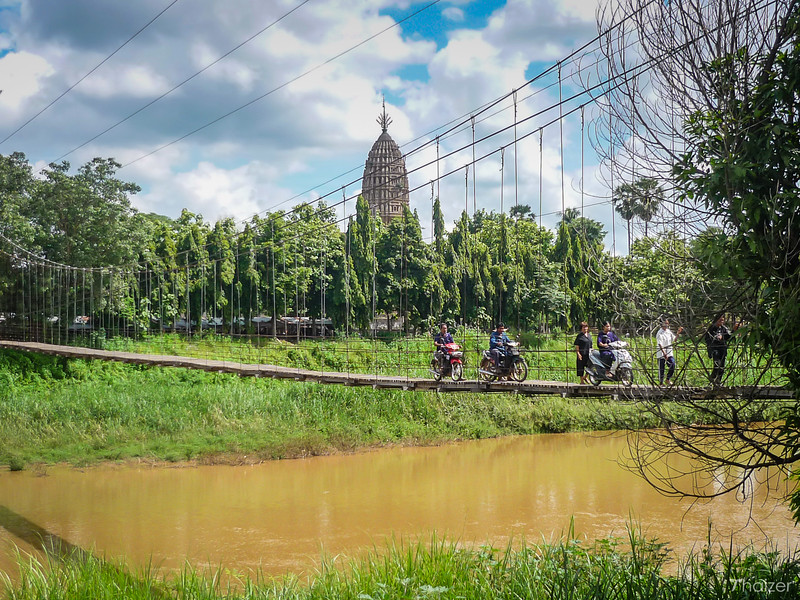 On the opposite side of the river you will see the Khmer style prang of Wat Phra Si Rattana Mahathat. From there, just follow the signs to the historical park. You’ll pass a number of ruins on the way as well as some quaint looking antique shops.

When you want to travel back to Sukhothai, retrace your route and when you reach the pink-coloured archway where the bus dropped you off, you need to cross the road. Buses back to Sukhothai depart approximately on the hour from 1pm-4pm. The last bus back is 4pm, but double-check for yourself. There is a shaded sala (pavilion) where you can wait for the bus, but when you see a bus approaching make yourself visible and wave it down. The bus drivers and conductors are usually very good and will be looking out to see if there are any passengers to pick-up at that location.

Si Satchanalai Historical Park is open every day from 8am-5pm. Entrance ticket to the main park is 100 Baht for non-Thais.

Much of the park is flat and with paved roads makes for a comfortable and enjoyable bike ride, but obviously you should take precautions to protect yourself from the sun even on cloudy days and keep hydrated. Packing a small foldable umbrella or rain poncho in your daypack is also a good idea. There are parts of the park which are quite remote where you will feel like you are the only visitor so carry a mobile phone with you and a contact number (e.g for your hotel or guest house) just in case you should fall off your bike or need assistance. 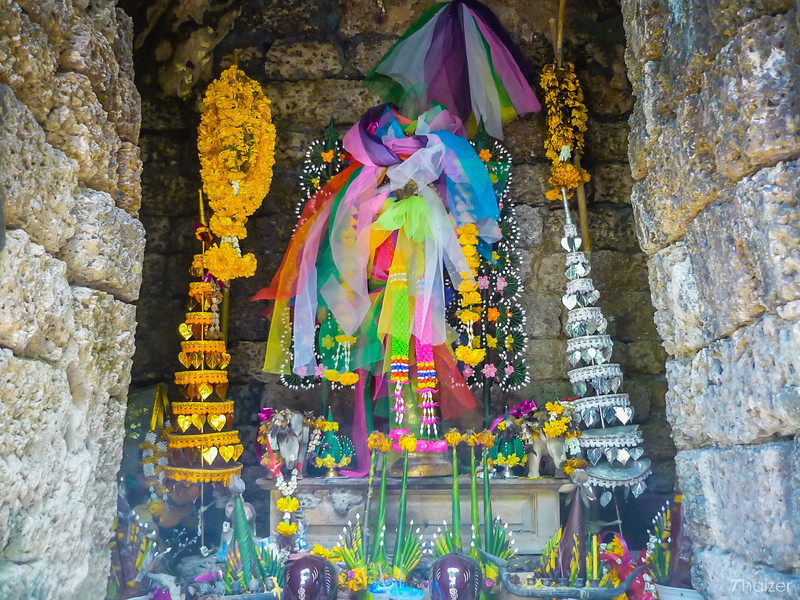 If you are planning a trip to Sukhothai, a day trip to Si Satchanalai is highly recommended. Si Satchanalai Historical Park is a delightful place to visit and whilst it’s popular with Thai visitors, relatively few overseas tourists make it out here. Although these are old ruins, they are still important religious sites. You’ll notice that some shrines, such as the city pillar shrine, will have fresh flowers laid there. This demonstrates how important these sites are to Thai people so please behave respectfully at all times. No matter what state of disrepair a Buddha statue may be in, do not climb over or sit on any Buddha images.