One of Thailand’s most important temples, Wat Suthat is home to the 8-metre high meditating Buddha figure of Phra Siri Sakyamuni Buddha which was brought to Bangkok from Sukhothai in the early 1800s. The inside of the temple is renowned for its beautiful murals and frescoes. Outside, a number of Chinese statues can be seen. It is thought that these were brought over from China during the reign of Rama I when they were used as ballast on rice boats. 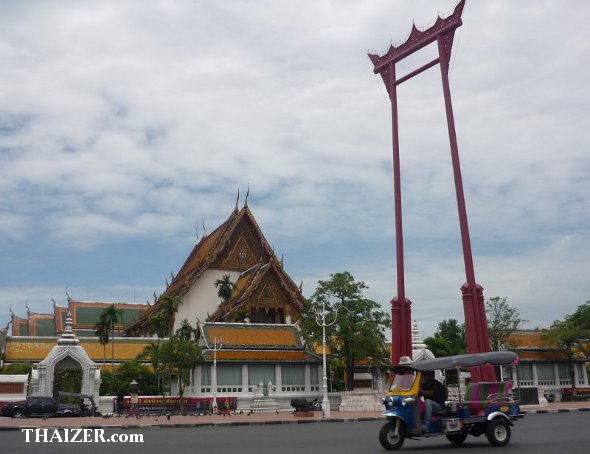 The area in front of the temple is dominated by Sao Ching Cha otherwise known as the Giant Swing. The teak posts, which are painted red, once supported a huge seat which was used during a festival of Brahmin origin to honour the god Shiva. The act of swinging was supposed to ensure a good harvest and teams of young men would stand on the seat and swing to great heights. The teams competed against each other to try and grab a bag of gold or silver which was suspended from a long bamboo pole. Over the years, there were many injuries and a number of deaths during the ceremony which finally ceased in the 1940s.

Wat Suthat and the Giant Swing are located to the east of the Grand Palace on the route that leads to the Golden Mount (Wat Saket).
photo © thaizer.com
Save up to 70% on Bangkok hotels »
Bangkok boutique hotels »