Located just outside the city of Chiang Rai, Wat Rong Khun has become famous in Thailand as the White Temple. A unique design mixing contemporary and classic style makes this one of Thailand’s most unusual and visually striking man-made attractions. Even for those who might consider themselves ‘templed-out’ on their trip to Thailand, this unique wat is highly recommended if you are visiting the Chiang Rai area. 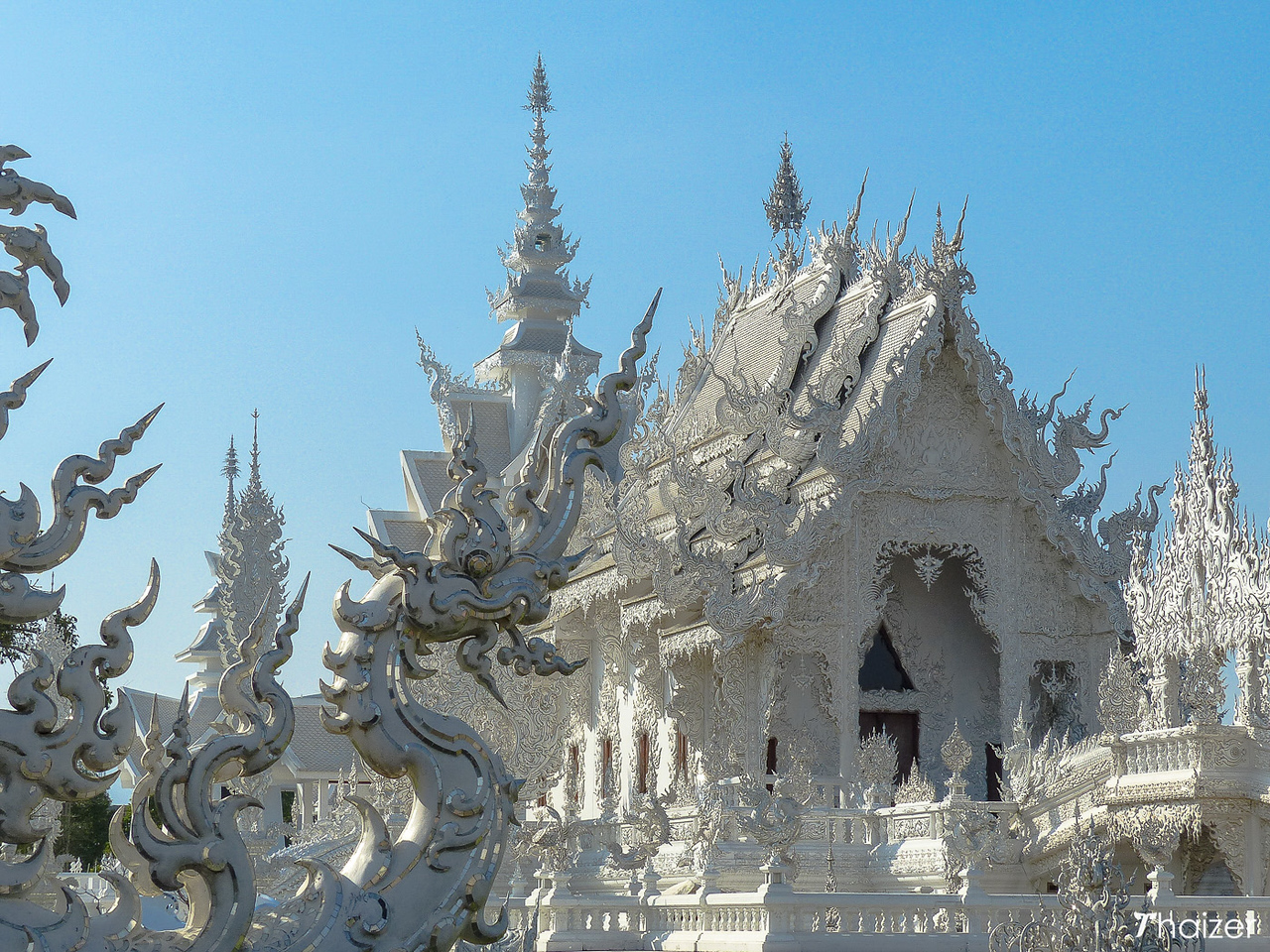 Chalermchai Khositpipat: the creator of the White Temple

The White Temple is the creation of Thai artist, Chalermchai Khositpipat who was born in 1951 in the village of Rong Khun in Chiang Rai province. The project is an act of faith by the internationally acclaimed artist who has invested large amounts of his own money to create the temple. Chalermchai’s aim is to make the temple one of the world’s greatest works of art and he wants visitors from around the world to enjoy the labour of love he has undertaken in his home village in his beloved Thailand. Work began on the new Wat Rong Khun temple in 1997, but the artist knows that there are still many years to go before the project is completed and he has made plans for work to continue in the event of his death. 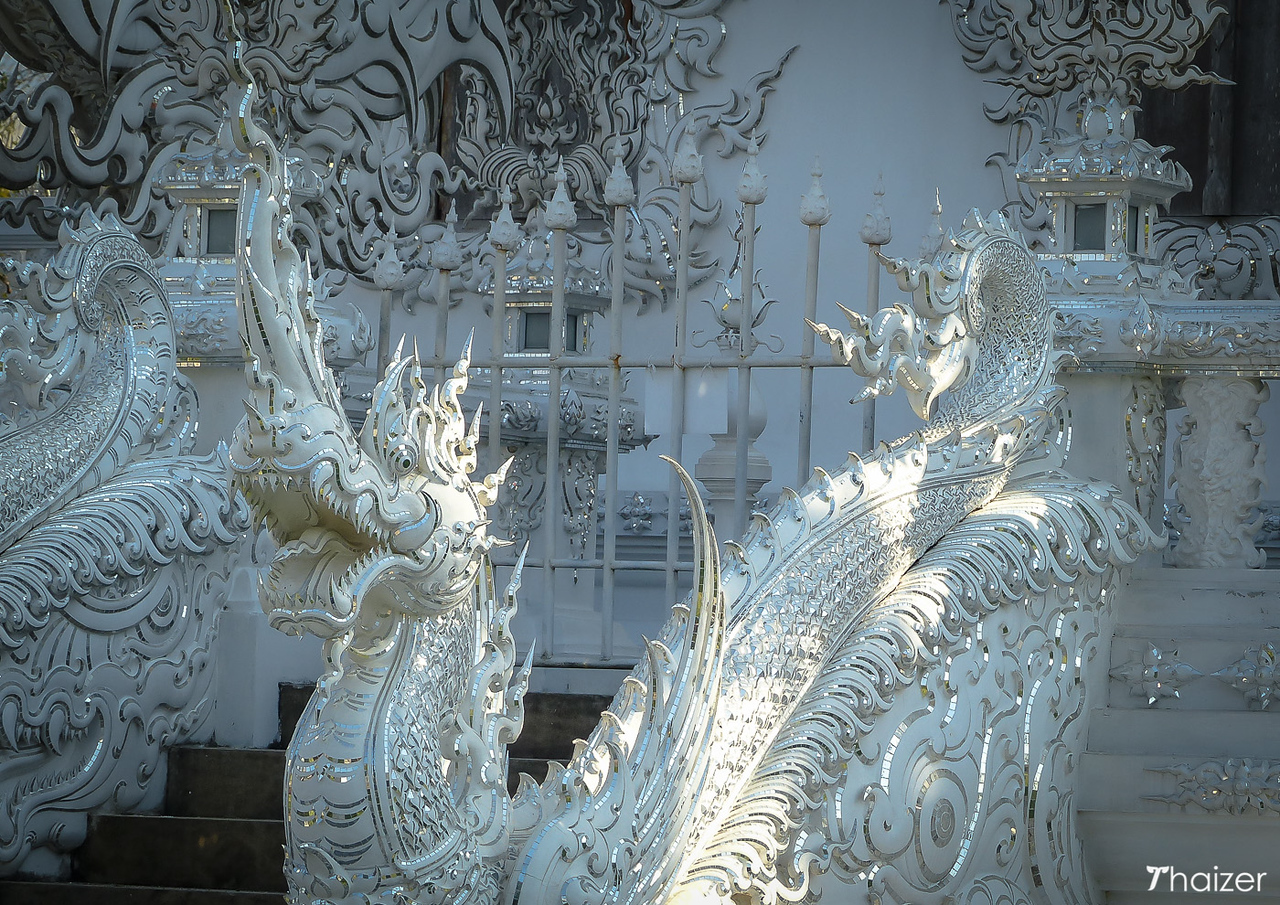 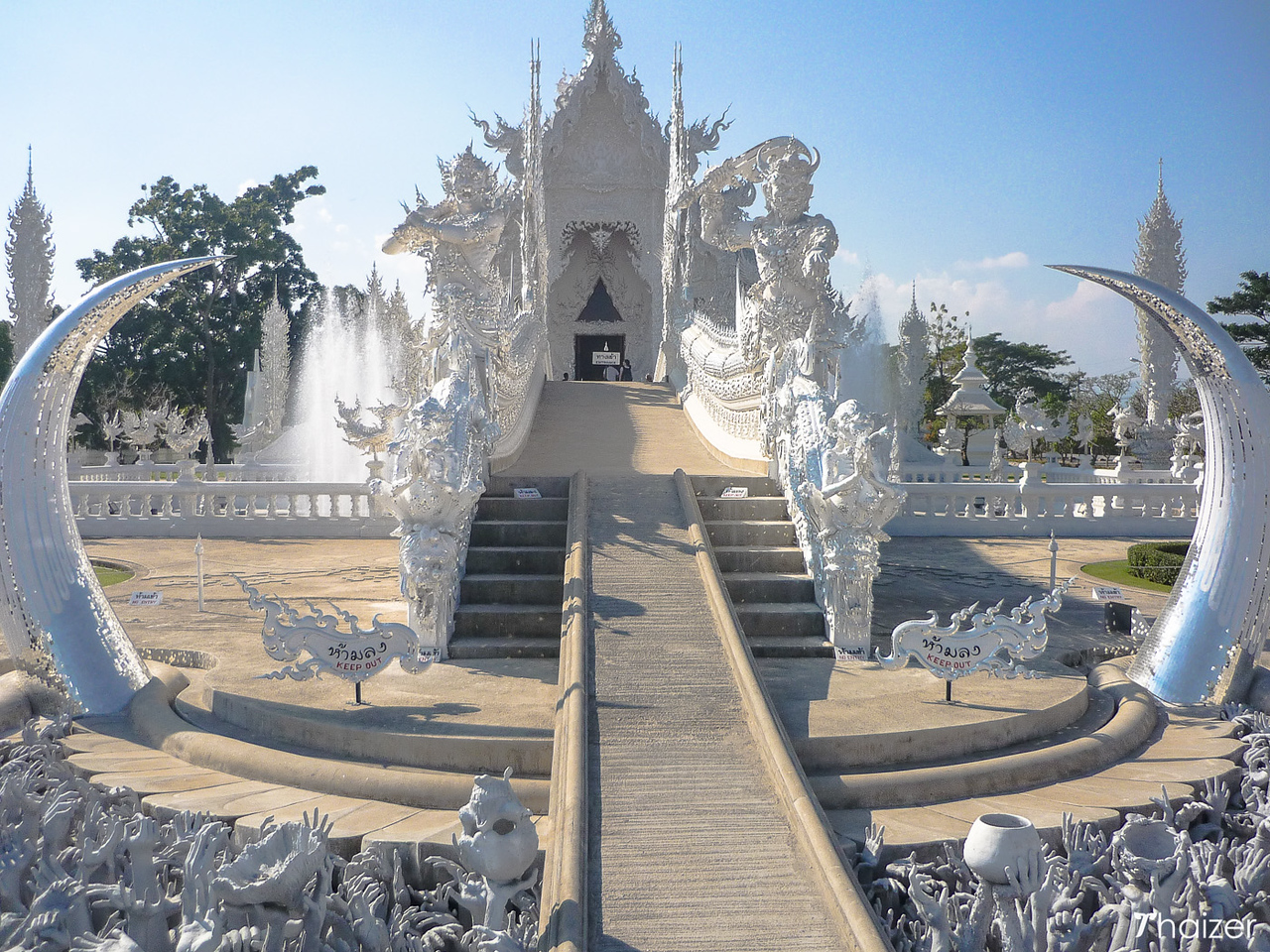 Chalermchai wanted to build a temple that symbolised heaven with gleaming white for the Lord Buddha’s purity and the glass reflecting his wisdom shining over the earth and the universe. Before you enter the main temple you need to cross a small bridge. This crossing represents the transition from the cycle of life to the land of the Buddha.

The theme of the Buddha’s teachings or Dharma being a release for human passion and desire is symbolised throughout the temple grounds. Look out for the whisky bottles in the trees with demon heads and also the traffic cones with demons on them. This theme is continued with the thought-provoking murals inside the main temple. Artistic depictions of the collapse of New York’s Twin Towers aren’t what you would expect to find in a Thai Buddhist temple, but the artwork on display here is truly unique. Take a close look at the murals and you will see some surreal scenes with rocket ships and cartoon characters including Spiderman, Superman and Doraemon on display. The murals are still in the process of being painted so don’t be surprised if when you visit you actually get to see one of the artists at work. 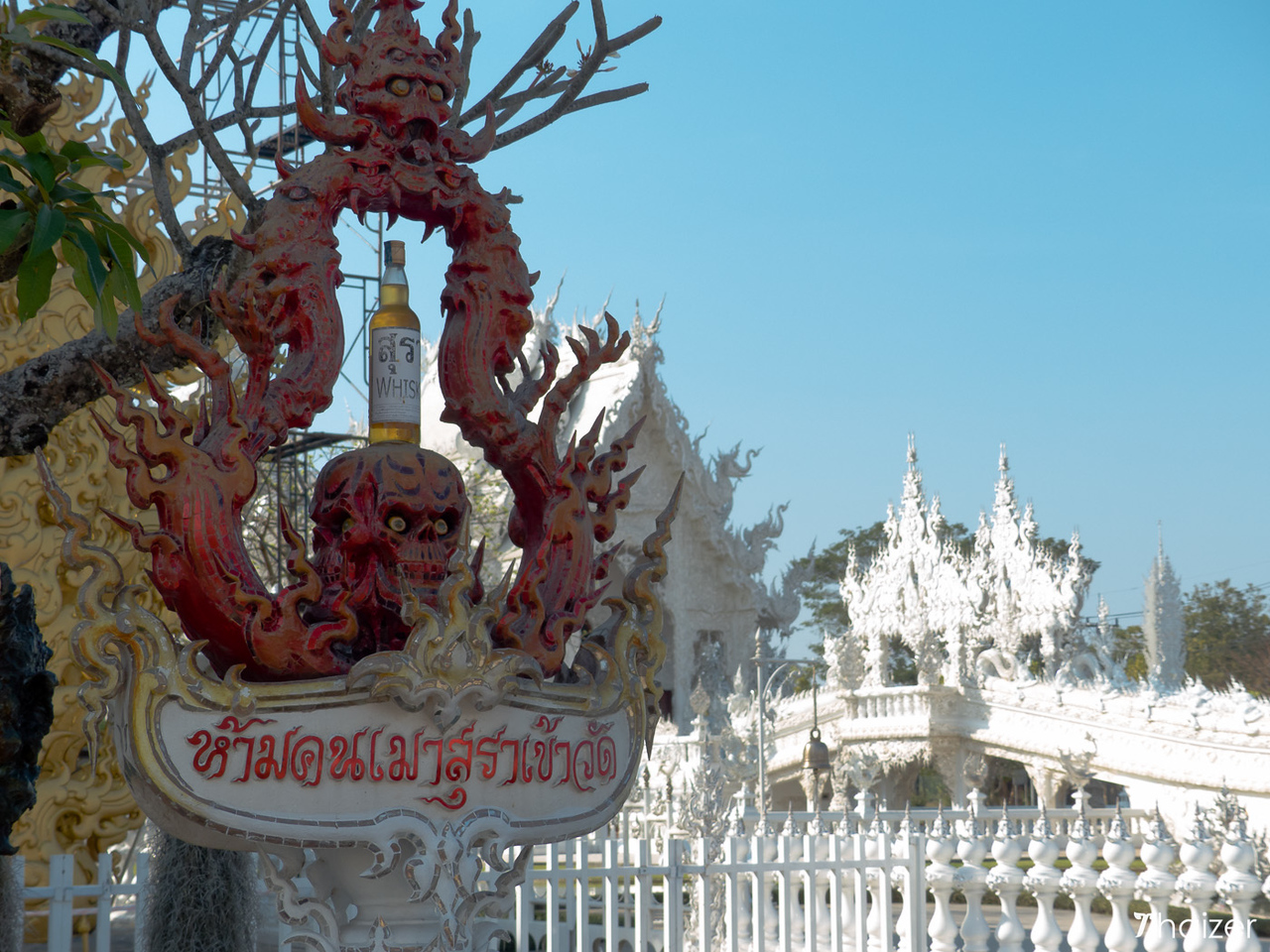 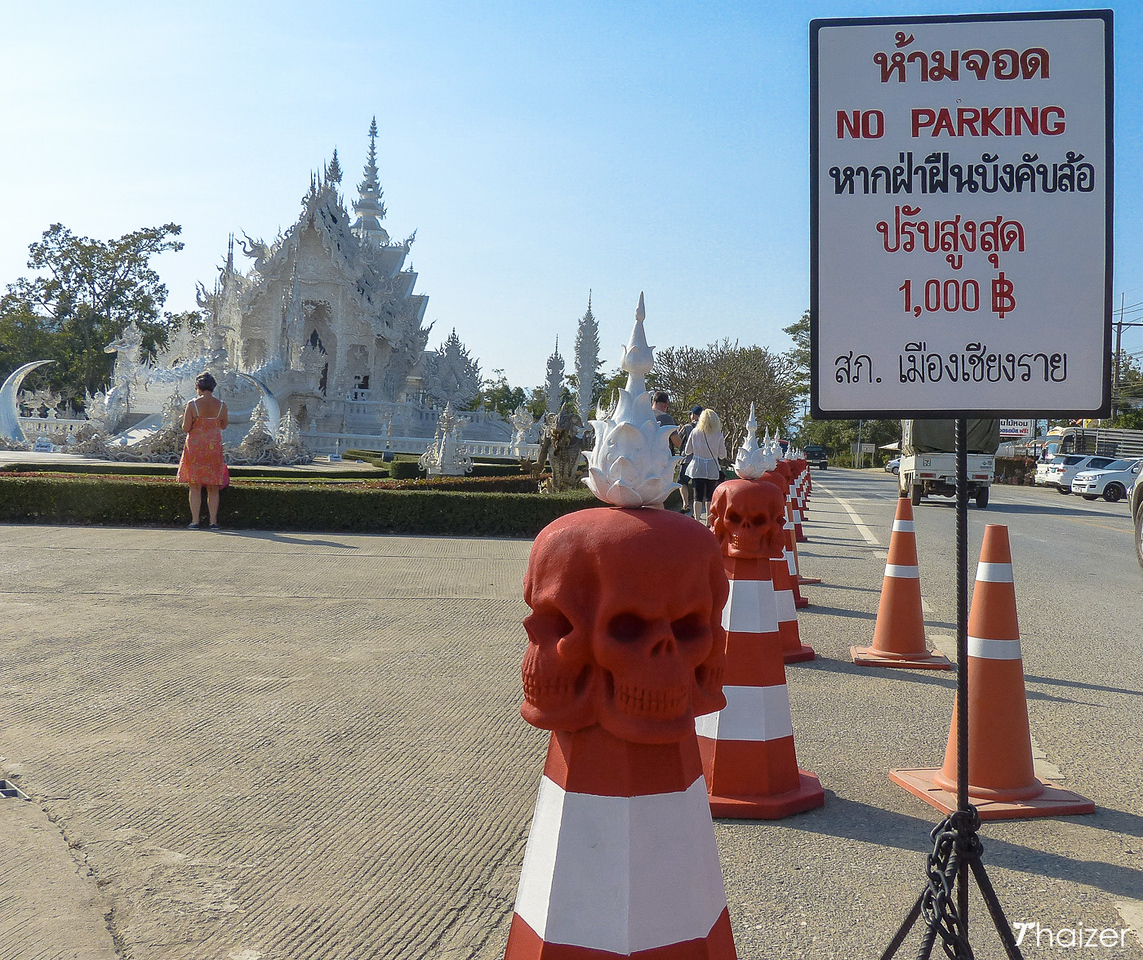 I can’t think of any other place I’ve visited where people were queuing up to take photos of the toilets. The ornate golden temple-like building that houses the men’s and ladies toilets is a work of art in its own right. 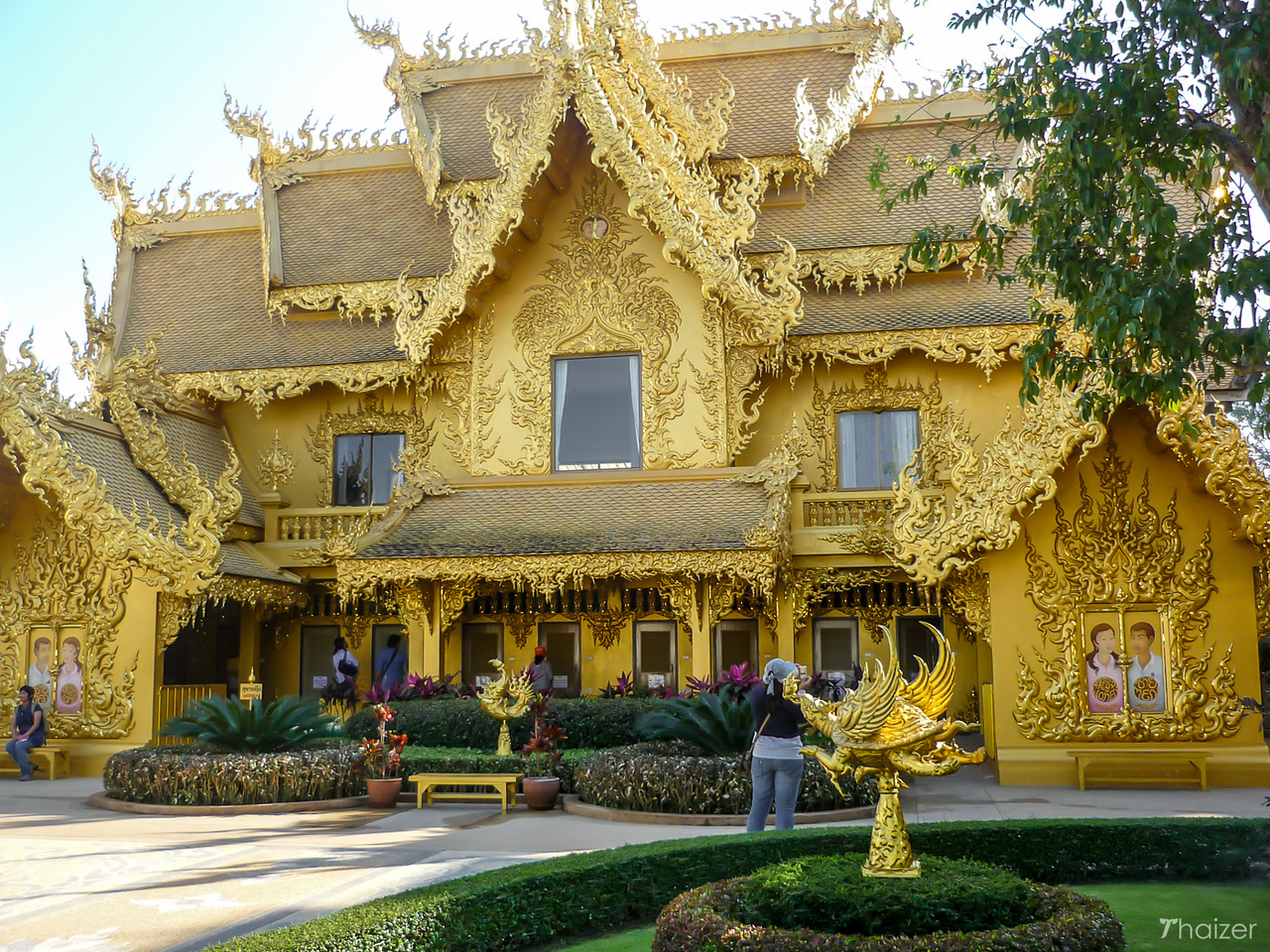 Despite the unusual look and feel of the White Temple, it shouldn’t be forgotten that this is a religious building and visitors should act respectfully. Take off your shoes and cover your shoulders and knees before entering the main bot where the Buddha image is housed. Photos are not permitted inside the main bot at Wat Rong Khun.

Wat Rong Khun is open daily from 08.00-18.00. Entrance is free*, but donations are welcome. The White Temple can get busy at times with tour groups, but there are plenty of coffee shops and restaurants close by where you can sit and wait for the crowds to move on.

*Update: October 2016
From October 1, 2016 non-Thai visitors will be charged an entrance fee of 50 Baht. The fee is expected to include a souvenir brochure and bag. Entrance to Wat Rong Khun remains free for Thai visitors.

How to get to the White Temple

Any tour company in Chiang Rai can arrange a visit to the White Temple for you. Wat Rong Khun often forms part of a day tour taking in a number of other Chiang Rai attractions including Baan Dam (Black House). If you want to make your own way to the White Temple to give you more time and freedom, you can arrange to hire a tuk-tuk, songthaew or taxi to take you. Expect to pay a minimum of 300 Baht* (*price checked January 2016) for a trip there and back with one hour at the temple.

For a fare of 20 Baht per person, the local bus from Chiang Rai bus station offers a convenient way to get to Wat Rong Khun. Journey time is approximately 20 minutes. The timetable listed below is the information I was given at Chiang Rai bus station on my last visit in January 2016. Please note that this is a local bus service and times may be subject to change and buses may not always run on time. Buses depart from Chiang Rai Bus Terminal 1, (near the Night Bazaar). The buses used are old and basic but do the job. The bus for the White Temple is usually blue and white in colour, but confirm before getting on the bus that it goes to Wat Rong Khun. The bus conductor will make sure you get off at the correct place. The bus stops at an intersection opposite Wat Rong Khun and you then need to cross a dual carriageway to get to the temple. When you get off the bus you’ll see a small police station opposite you. There is a sala (shaded pavilion) which serves as a bus stop adjacent to the police box and this is where you can catch the bus back to Chiang Rai.