If you visit Ko Samet, there is a good chance you will seen at least one of these statues which feature a flute-playing prince, a mermaid and a female giant. So, what’s the story behind them? Well, they are there because they are all characters from a famous Thai poem from the 1800s called Phra Aphai Mani which featured Ko Samet in the storyline. 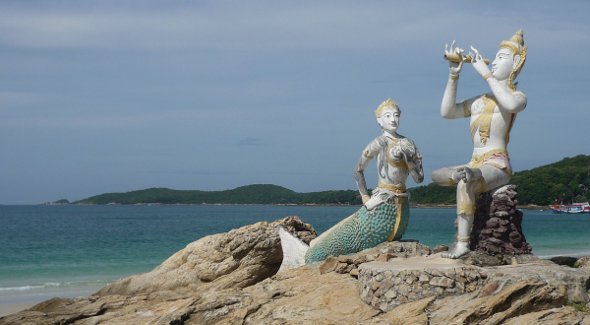 It is thought that Thailand’s most famous poet, Sunthorn Phu, began writing Phra Aphai Mani in 1821. Written entirely in verse, the epic poem is 30,000 lines long and considered to be a masterpiece of Thai literature. The story tells of two princes from a kingdom within ancient Siam who are ordered by their father to go away and prepare for royal duties. When they return, the king is furious to see that the only skill one prince has managed to learn is sword-fighting whilst the other prince, Aphai Mani, has learned how to play the flute. Chastened by the king, Aphai Mani sets off on an adventure that sees him travel through a fantasy land filled with giants, magical beasts, beautiful women and mermaids. In the story, the prince is exiled to an undersea kingdom ruled by a female giant named Pisuea Samut (‘Butterfly of the Sea’). The giant transforms herself into a beautiful woman to trick Aphai Mani into falling in love with her. When the prince finally discovers the deception he manages to escape from the kingdom with the aid of a mermaid. Assisted by a hermit, the young couple hide from the giant on the island of Ko Kaew Phitsadan (‘Magic Crystal Island’) which was the former name of Ko Samet. The prince then falls in love with the mermaid and so the story goes on with more adventures and romantic encounters along the way as Aphai Mani falls in and out of love on his travels.

Born in Bangkok in 1786, Santhorn Phu worked at various stages of his life as a poet and scribe within the royal household. He fell in and out of favour with different monarchs in Siam before turning to drink. Arrested for his involvement in a fight in 1821, Sunthorn Phu began writing his epic poem whilst in prison. The story was published in instalments which helped the poet to earn some money whilst he was out of favour with the royal court. It would be two decades before the story was complete. 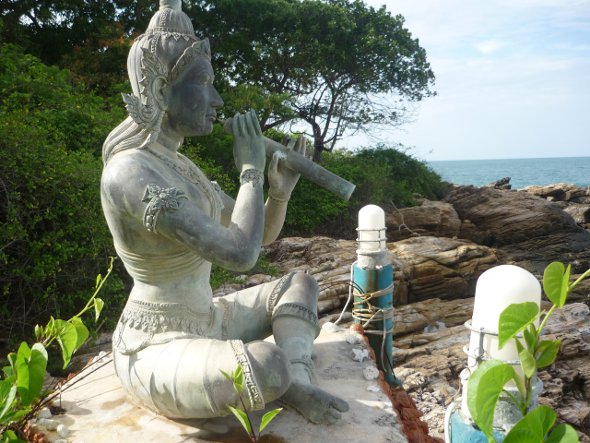 Sunthorn Phu is fondly remembered in Thailand today for his ability to bring poetry and literature to the masses and his birthday, June 26, is celebrated as Sunthorn Phu Day. Unlike his contemporaries, he wrote in a way which the wider public could understand using the language of the common man. His predecessors wrote in convoluted prose aimed at royalty and highly educated people, but the style of Sunthorn Phu and his stories about love, romance and broken-hearts brought him a much wider audience for his work.

Where to see the statues

The piper and mermaid statues featured here are both located on Hat Sai Kaew beach. The main one is located centrally on a small rocky outcrop and is easy to spot. The smaller piper statue, is in a more isolated position on rocks at the northern end of the beach. The new pier at Na Dan is the location for the female giant in the sea, Pisuea Samut.

As well as the statues on Ko Samet, there is another famous statue of the female giant located in the sea at Hat Puek Tian beach north of Cha Am in Phetchaburi province. Sunthorn Phu wrote about various regions in Thailand in his work, but he has a particular association with Rayong province (his father was from Rayong) where the poet is commemorated with a statue and public park in his name.