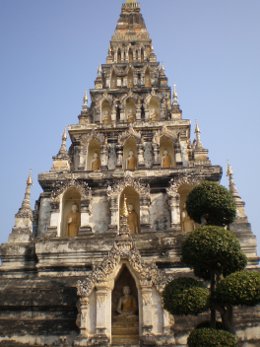 The ancient ruins at Wiang Kum Kam make for an interesting and pleasant half-day trip from Chiang Mai. It was originally thought that Wiang Kum Kam was built by King Mengrai over 700 hundred years ago as the capital of the northern Lanna kingdom. However, archaeologists now believe that the site pre-dates King Mengrai and was one of a number of fortified satellite cities that surrounded the Mon kingdom of Haripunjaya with its capital at Lamphun. King Mengrai would eventually conquer Lamphun in 1281 and unite the north of Thailand as the Lanna kingdom. Following his success at Lamphun, King Mengrai based himself at Wiang Kum Kam and this ancient city was to be the prototype for the new Lanna capital which was founded a few kilometres further north at Chiang Mai in 1296.

It isn’t known exactly when or why Wiang Kum Kan was abandoned. The original legend said that the city was inundated by the Ping River, but historians now believe that Wiang Kum Kam was probably plundered by the Burmese sometime before 1750. Excavation of the site continues as the ancient city gives up more of her secrets. You don’t have to be interested in Thai history to enjoy the quiet and peaceful rural surroundings of Wiang Kum Kam. The site is popular with Thai tourists and school groups, but not many overseas tourists make the short trip out from nearby Chiang Mai.

I last visited Wiang Kum Kam with family and we took the option of an organised private half-day tour. This included pick-up from central Chiang Mai from where we were taken to the Ping River for the gentle boat cruise south to the ancient city. Approaching from the river you see the distinctive Chedi Si Liam, a pyramid shaped chedi which was built by King Mengrai in memory of his dead wife. Closer inspection of the chedi reveals individually carved niches all with their own Buddha image. Our tour included a horse-drawn carriage and guide to take us around the sites, but there is also the option of using a bicycle or the open-sided passenger buggy used primarily by Thai visitors. We found that each time we got off the pony and trap to explore the sites on foot, we would return to find a crowd of Thai people excitedly taking pictures of themselves with the horse and cart. On numerous occasions we were asked to be in the photos and were accorded instant celebrity status. Amazing Thailand.

Wat Kan Thom (also known as Chang Kham) marks the centre of the old city and it is here, in a modern spirit house, where the soul of King Mengrai is said to reside. We finished our tour at Chedi Si Liam and were then taken for refreshments at a farmer’s house by the river before taking the boat back to Chiang Mai. The sites at Wiang Kum Kam might not be as impressive as those at Ayutthaya or Sukhothai, but my family enjoyed the excursion which was good value-for-money and was a relaxing way to spend some time in northern Thailand’s rural surroundings soaking up some ancient Thai history.