Buses for Sukhothai depart from the Arcade Bus Station in Chiang Mai. At the time of writing, buses depart from the original Arcade bus terminal (and not the new building on the opposite side of the road). There are a couple of companies who run services between Chiang Mai and Sukhothai and I recently travelled with Win Tour.

Tickets currently cost 239 Baht with the total journey time taking approximately 5.5 hours (including a 30-minute refreshment break). For both legs of my recent journey I bought my ticket on the day of travel approximately 30 minutes before the bus departure time. There is an option to buy the ticket the day before you although in most instances it isn’t necessary to buy your ticket in advance. Exceptions are holidays or festivals such as New Year or Loy Krathong where there is extra demand for bus services on the Chiang Mai-Sukhothai-Chiang Mai route.

Bus from Chiang Mai to Sukhothai

The Win Tour bus I used recently was showing some signs of age inside, but it was comfortable enough with air-conditioning and a toilet on board. Unfortunately, the particular bus I travelled on the toilet was broken and not in use, but the journey did include a refreshment stop at Lampang bus station. Win Tours buses usually have a lower deck where big bags and items of luggage can be stored and seating is on the upper deck where there is also space above the seats for small bags to be stored. 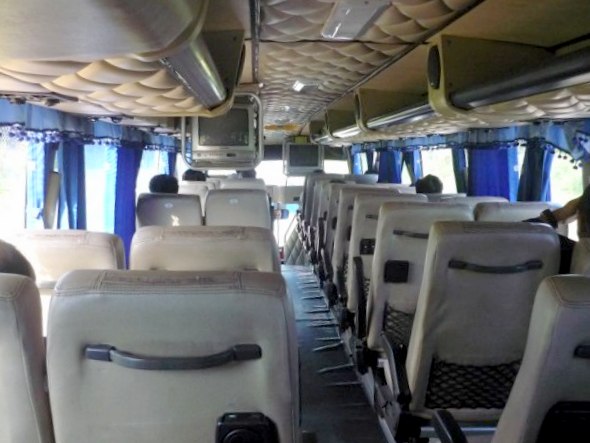 Some (but not all) buses drive through Tak and Old Sukhothai before they reach the bus terminal at New Sukhothai. If you are staying in Old Sukhothai, check before boarding whether the driver is going via Old Sukhothai so you can get off there. If he isn’t, it still isn’t a problem because you simply go to New Sukhothai bus station and take a songthaew from there to Old Sukhothai.

Sukhothai to Chiang Mai by Bus

I travelled back to Chiang Mai on a Sunday morning in the low season and bought my ticket thirty minutes before the bus departed New Sukhothai and had no problem getting a seat. With a few stops en route to pick up passengers, by the time the bus reached Old Sukhothai it was standing room only. There were a number of young backpackers travelling to Chiang Mai who got on the bus at Old Sukhothai (near Sukhothai Historical Park) who didn’t look very happy about having to stand. Fortunately for the backpackers, many of the Thai passengers disembarked an hour later when the bus arrived at Tak. I would guess the shortage of seats isn’t an issue during the week, but it is something worth noting if you intend to board the bus at Old Sukhothai on a Sunday morning or afternoon.

Find a hotel or guest-house in Sukhothai »