The old town district of Chiang Mai is quite easy to get around by foot or bicycle, but going a bit further afield will probably involve catching a tuk-tuk or songthaew. Many locals own motorbikes and it’s also relatively easy for tourists to rent motorcycles on a daily or weekly basis. Please be aware that traffic outside of the old town can get very busy and driving standards often leave a lot to be desired. An air-conditioned bus service does run in Chiang Mai, but unfortunately the routes and timetables aren’t very user-friendly and the buses are infrequent. It is much more convenient to use songthaews and tuk-tuks.

The songthaews are the red pick-up type trucks you will see driving around. In Chiang Mai, the locals tend to call them sii rot daeng or rot sii daeng (which basically means the red 4-wheelers). They act as shared taxis and minimum fares are 30 Baht. Motion a passing songthaew to stop and tell the driver where you are going. If it isn’t on his route, he’ll shake his head and you just wait for the next one to come along. If he is going your way, jump in and off you go. Press the overhead bell/buzzer when you want to get off and then pay the driver. Songthaews can also be hired as private taxis (on an hourly basis if necessary) and you have to negotiate a fare in advance.

Tuk-tuks are usually more expensive than songthaews and

how much you pay will depend on your negotiating skills (or ability to speak Thai!). You can probably expect to pay a minimum of 40-50 Baht for a short journey, but prices will increase at night. Tuk-tuks and songthaews parked up at the night bazaar will always try and charge you a higher price than normal. For a cheaper rate, try and catch one that’s passing by rather than one that’s parked up waiting for custom.
Read more about tuk-tuks

Chiang Mai airport has to be one of my favourites in Asia. Compact, efficient and, depending on local traffic, a mere 10-minute ride away from central Chiang Mai. If you arrive in Chiang Mai without pre-booking accommodation, there is a hotel information and booking kiosk in arrivals. A no-hassle taxi service is also available to transport customers to their accommodation (see taxi meter below). Many hotels and guest houses can also arrange airport transfers although some may charge for this service.

The yellow and green taxis are an increasingly common sight on Chiang Mai’s roads, but they are still not as easy to find as the red songtahaews. If you do specifically want a taxi as opposed to a songtahew, your hotel or guest house should be able to pre-book one for you and give you an approximation of the fare.

From the airport there are now two taxi services in operation depending on which taxi booth you go to in arrivals. At one booth they will write a ticket with your destination, you hand it the dispatcher at the airport exit and they allocate your driver. You pay the driver when you reach your destination and the set fare is 160 Baht to the city centre. The other booth (marked ‘taxi meter’) will also allocate you a driver but you pay a small fee to the dispatcher and then whatever the fare is on the meter. If you are travelling into Chiang Mai old town or downtown areas there isn’t a great deal of difference in the fare.

Located on Charoen Muang to the east of the city and the Ping River, songthaews and tuk-tuks are on hand to ferry passengers to the town centre. Expect to pay at least 70 Baht for a tuk-tuk from the station to the Thapae gate area. 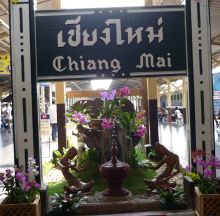 Tickets and reservations for onward travel can be made at the train station’s booking office, but most of the city’s numerous tour offices can also arrange this for you. The tour office will charge you a small fee for this service, but this is countered by the saving you make in songthaews/tuk-tuk fares to and from the train station booking office. Overnight sleeper services to and from Chiang Mai tend to be very popular all year round and and advanced booking is suggested. For sleeper services and rapid trains, various supplements are payable in addition to the standard fare. More details are available from the State Railway of Thailand website in the links directly below.
Train timetable to and from Chiang Mai (see Northen Line)
Train fares to and from Chiang Mai (excluding supplements)

Arcade Bus Station, the main bus terminal in Chiang Mai, is located on Thanon Kaeo Nawarat approximately 3kms to the north-east of the city centre close to the Superhighway. Buses to and from destinations outside Chiang Mai province (e.g. Bangkok, Chiang Rai, Mae Hong Son etc.) use the Arcade Bus Station.

Warning:
A lot of backpackers continue to book bus trips from the Khao San Road in Bangkok. Some of these buses have a bad reputation for thefts from baggage. In addition, the drop off point is often on a remote part of the Superhighway well away from the main bus station. Songthaew and tuk-tuk drivers (for drivers read touts) greet passengers and try and get them to stay at the particular establishment they represent.
Review: VIP Bus Service Chiang Mai – Chiang Rai

Located just north of Chang Puak Gate in the north of the old town, this bus station serves destinations within Chiang Mai province such as Mae Rim and Chiang Dao.