The distance between Pai and Chiang Mai is approximately 85 miles (135kms), but because of the winding mountain road the road journey can take between 3 and 5 hours. Route 1095 is very scenic as it climbs up and down the mountains, but if you are prone to travel sickness you may not appreciate all the bends in the road.

Bus from Chiang Mai to Pai

Air-conditioned and fan buses to Pai leave from Chiang Mai’s Arcade Bus Station. Be prepared for a long and slow journey as the buses navigate the steep incline and bends in the road that takes you up and over the mountains between Chiang Mai and Pai.

The local bus has no air-conditioning (pictured top right) but does have fans and with the windows open it doesn’t get too stuffy. The local fan bus is the cheapest way to travel between Chiang Mai and Pai by public transport with fares costing 72 Baht. Expect the trip to take anywhere between 4 and 5 hours including a 15-minute refreshment stop half-way into the journey which gives you a chance to go to the toilet, stretch your legs and buy food and drink. The local buses also stop numerous times en route to pick-up or drop-off passengers. Although this adds to the journey time it also provides an insight into local life as you watch villagers and hill-tribe people going about their daily business. Don’t worry if you are carrying large bags or backpacks because there is plenty of storage space on board. Tickets for the local non-air conditioned buses can be bought on the day of travel and are not bookable in advance 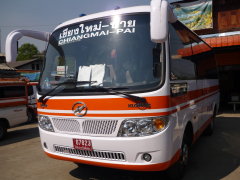 There are a number of different types of air-con buses which ply the Chiang Mai-Pai route and which depart from the Chiang Mai Arcade Bus Station. The older air-con buses previously charged 101 Baht but seem to be in the process of being phased out and replaced with the more modern and comfortable buses (pictured middle right) and mini-vans which charge 150 Baht. Air-con buses and mini-vans will normally make one 15 minute refreshment/toilet stop halfway into the journey. Journey time, including refreshment stop, is approximately 3.5 hours. 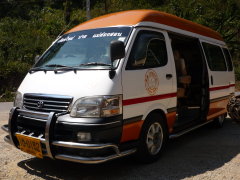 There are a couple of options for mini-buses to Pai. The mini-bus (pictured bottom right) from Arcade Bus Station is 150 Baht but doesn’t include pick-up so you will have to make your own way to the bus station. Alternatively, many Chiang Mai travel agents and guest-houses can arrange a mini-bus which will pick you up from your accommodation and is normally charged at around 200 Baht. This is a popular and convenient option for backpackers, but if the van is full luggage space is limited. These mini-bus drivers usually cover the Chiang Mai to Pai route in 3 hours, but you have to add on the time taken to pick passengers up from their accommodation in Chiang Mai.

If you hire a car or motorbike it gives you more flexibility about where and when you stop and on Route 1095 there are numerous places to park up and enjoy the views. As with anywhere in Thailand, driving can present its own hazards and extra care should also be taken if you are an inexperienced motorbike rider, especially in wet weather on winding roads. I’ve spoken to one expat motorcyclist who has ridden the journey from Chiang Mai to Pai and rates it as one of the most enjoyable journeys he’s done in Thailand. Some vehicle rental companies in Chiang Mai (such as Aya service) can arrange one-way rentals to Pai if you are not returning to Chiang Mai.