Victory Monument might not be on the main Bangkok tourist trail, but it is in an important area for transport connections in and around the Thai capital. The stone obelisk itself isn’t the most striking of Bangkok’s landmarks and it’s difficult to get close-up to anyway because it forms part of a very busy traffic roundabout. However, you do get an impressive view from the elevated Skytrain which curves around the Victory Monument. 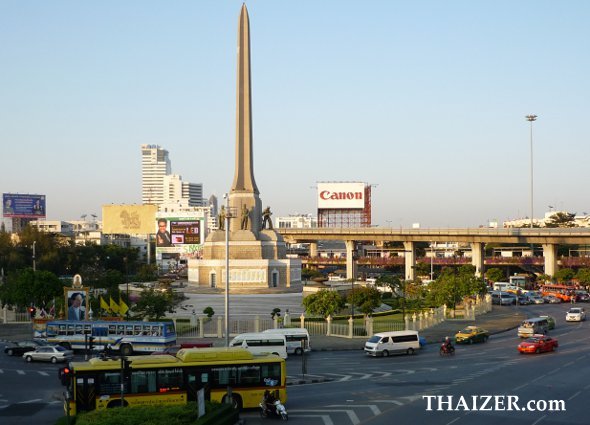 Normally referred to in Thai as ‘Anu Sawari’, Bangkok’s Victory Monument was erected in 1941 following the brief military conflict between Thailand and France. At that time, Thailand claimed back land in Laos and Cambodia which had previously been part of the Kingdom of Siam. However, in 1945 Thailand was obliged to hand back the land to the French who were colonial rulers in Indo-China. Today, the monument serves to mark all of Thailand’s military successes but it is probably better known to most Bangkok residents for its significance as a transportation hub.

The Victory Monument area is where private mini-buses and local BMTA (Bangkok Mass Transport Authority) buses congregate for commuters and Thai travellers. It can be quite confusing if you or your travelling companions don’t speak Thai, but you should still be able to muddle through although you may need to ask around a bit first. The BMTA buses are numbered and serve most parts of Bangkok. In addition to the BMTA buses there are also fleets of un-numbered privately operated mini-buses. These run to and from popular tourist destinations including Ayutthaya, Hua Hin and Pattaya. Just a few words of warning though. There isn’t much room in the private mini-buses for people let alone baggage. If you are travelling light then fine, but if you have a large suitcase or bag you are probably better off taking a regular bus or the train. The other, more important thing to note is that some of the private mini-bus drivers have a reputation for speeding and accidents have occurred in the past involving these mini-buses.

Update: September 2016
As part of a plan to ease traffic congestion in the Victory Monument area, private mini-bus companies have been told they must move out. The deadline for moving is October 25, 2016. Services will now operate from Bangkok’s main bus terminals. For example, mini-buses going to Hua Hin will depart from the Southern Bus Terminal just as the big buses do.

The roundabout where the Victory Monument is located also marks the start of one of Thailand’s main highways, Thanon Phaholyothin. This road runs north past Chatuchak Weekend Market, Mo Chit Bus terminal and Don Muang airport. The road continues all the way through the heart of the central plains of Thailand and on through the north of the country. If you find yourself in the northern outpost of Mae Sai (as many travellers do looking to extend their Thailand visa) you will be able to see the end of Thanon Phaholyothin leading up towards the Burmese border.