The early morning sun twinkles on the surface of the water as the boatman slowly guides his vessel to shore. But there is still no sign of the star attraction. It’s only after clambering aboard and travelling for twenty minutes or so into the heart of Nong Han Lake that the scene begins to change. Now the lake is living up to its colloquial name. This is ‘Talay Bua Daeng‘; the ‘Red Lotus Sea’. Tucked away in a quiet district in the north-eastern province of Udon Thani, the lake is a unique tourist attraction that springs to life during Thailand’s cool season months when carpets of pink water lilies cover the surface of the water. 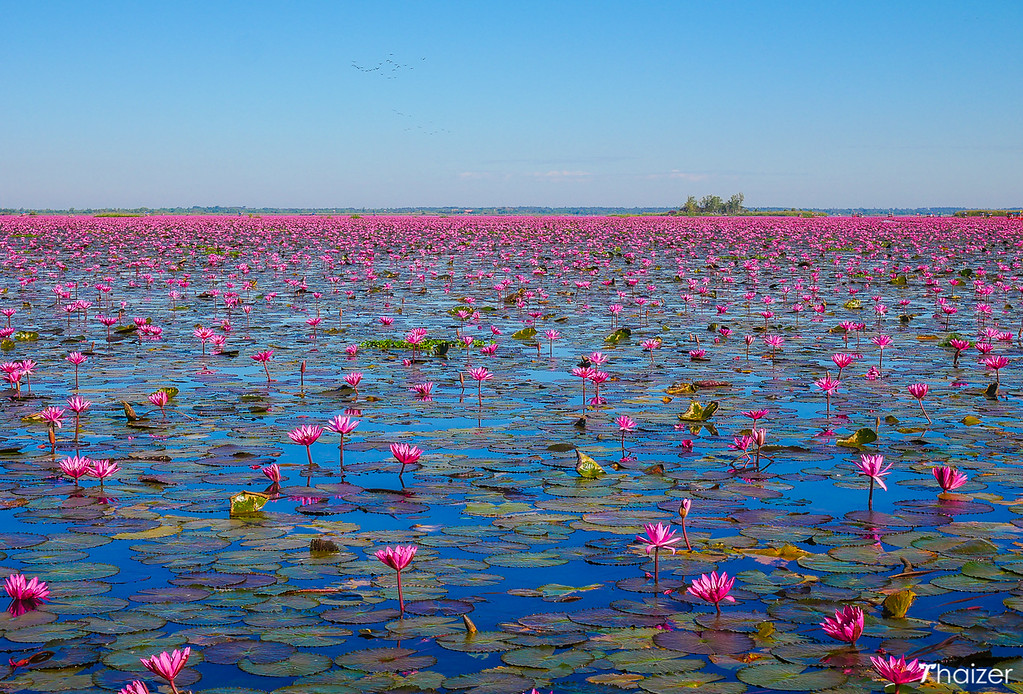 Lotuses or water lilies?
Although Nong Han Lake is nicknamed the Red Lotus Sea or Red Lotus Lake, local experts tell me the pink-coloured flowers are actually tropical water lilies. The blooms do resemble lotuses and share similar characteristics. The leaves and flowers of the lotus usually rise above the water surface whereas the leaves and flowers of the water lily usually float on the surface of the water. However, the exception to this are tropical water lilies where the leaves float on the surface and their flowers rise around six inches above the water as is the case on Nong Han Lake.

At approximately 8km long and 3km wide, the freshwater lake at Nong Han Kumphawapi is an important water source that sustains a variety of fish, birds and plants. The lake feeds into the Lam Pao River, another waterway which plays a significant role for the inhabitants of Udon Thani province. Nong Han Kumphawapi Lake is also an expanse of water that holds a special place in the hearts of local people thanks to an ancient legend.

The legend of the lake

The Isaan region of north-east Thailand is an area that is rich in folklore. One story tells of a tragic love triangle involving a princess called Nang Ai and two of her suitors, Prince Phadaeng and Prince Pangkhee. It’s an epic story that involves magical kingdoms, reincarnation, love, rejection and revenge. According to one part of the tale, Prince Phadaeng wanted to avenge the death of Nang Ai and a fierce battle ensued with an army of mythical nagas. The serpent army flooded the scene of the battle resulting in the formation of Nong Han Lake. There are a number of variations of the legend, but the story is well-known to Isaan residents and has also been made into a movie. This all adds to the romantic imagery of the lake and makes it even more of an attraction to Thai visitors. 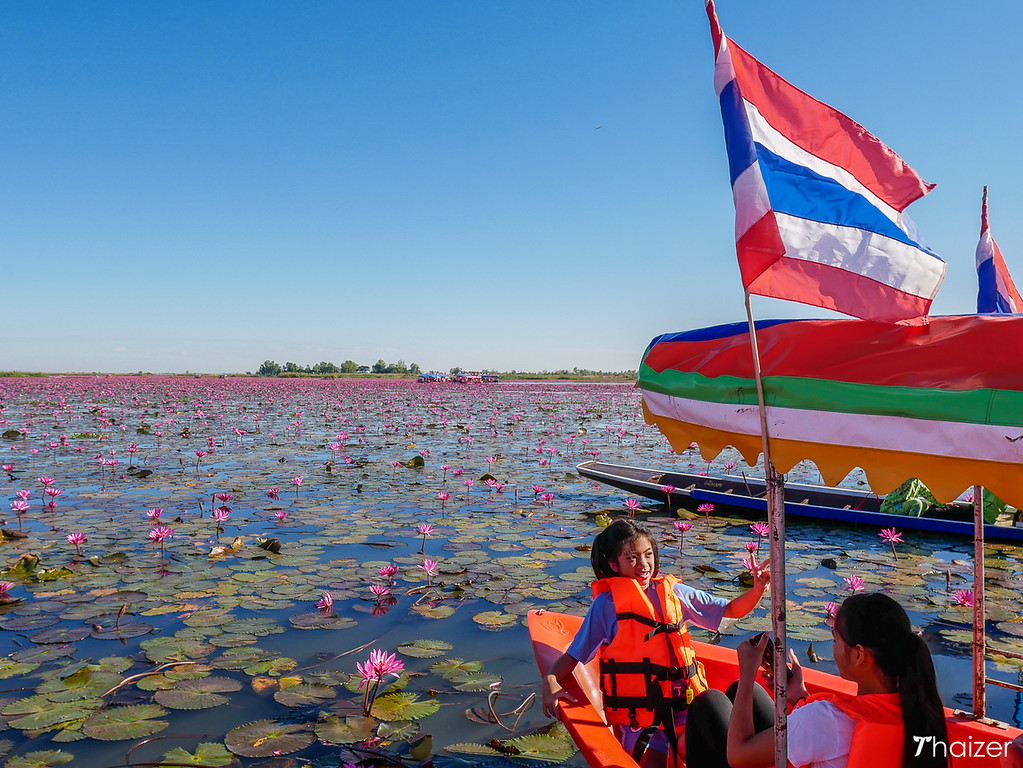 When is the best time to visit the Red Lotus Lake?

The best time to see the water lilies on Talay Bua Daeng is usually from late November/early December to February. And the optimum time to see them is in the morning (from around 6-11am) before the sun becomes too strong and the flowers start to close up again. 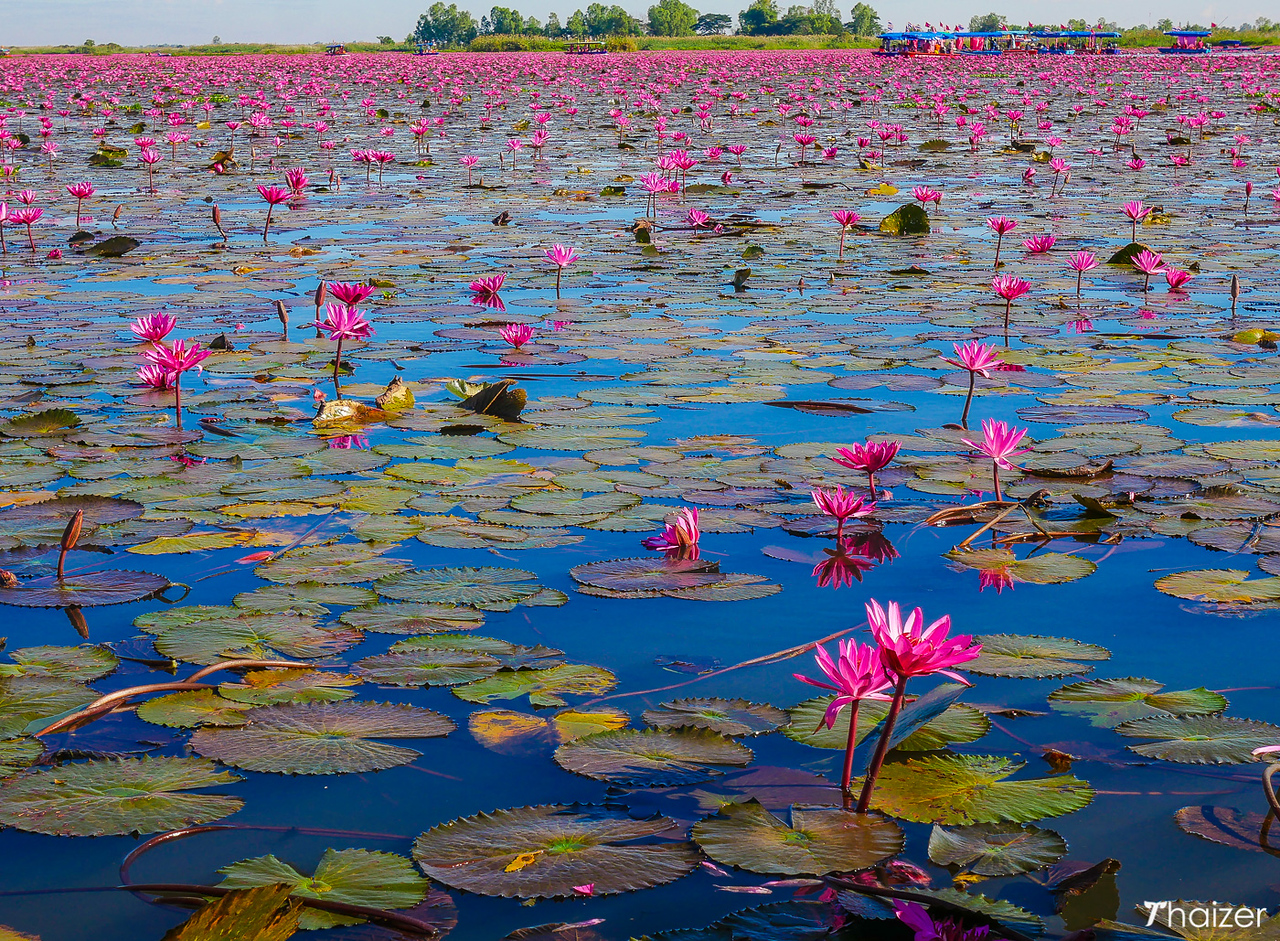 Visitors to the lake can’t see the clusters of water lilies from the shore. To view the flowers in all their glory, you need to take one of the boats that travel out into the far reaches of the lake. The cost of the boat hire varies depending on the type of boat and the length of the tour you opt for. The shorter route takes approximately 60 minutes and the longer route around 90 minutes. I’d advise taking the longer route. Once you are in the boat it takes at least 15 minutes to cross the lake to see where the flowers are at their best.

To buy a ticket for the boat, you need to queue at the ticket kiosk. You’ll be told what number boat you are on and then wait for your number to be called. The majority of the tourists at the lake are Thai and there is limited information in English, but the staff at the lake will help you if required.

The bigger boats can accommodate up to eight people and include a canopy to keep the sun off. They also include curtains which is great for keeping the sun out of your face, but not so good for viewing the flowers! The cost for the bigger boat is 300 Baht for the shorter route and 500 Baht for the longer route. This is for the whole boat so you divide the total cost between the number of passengers.

Smaller boats are also available and are ideal if you are travelling solo or as a couple. The price for these are 100 Baht per person for the shorter route and 150 Baht per person for the longer route. I was on one of the bigger boats during my recent trip, but did ask about the cost of hiring a smaller boat privately as a solo traveller. As is often the case in Thailand, I was given different answers, but it seems that if you are the lone passenger you can expect to pay around 300 Baht.

There are channels where the boats cut through the flowers and there are also designated stops where the driver will turn off the engine and you have the chance to pose for photos. The smaller boats have the advantage of being able to go further into the blooms. The lake is shallow and in most places has a depth of only two or three feet (60-100cm.) Although the water isn’t deep, boats do carry life jackets and you may be asked to wear one. 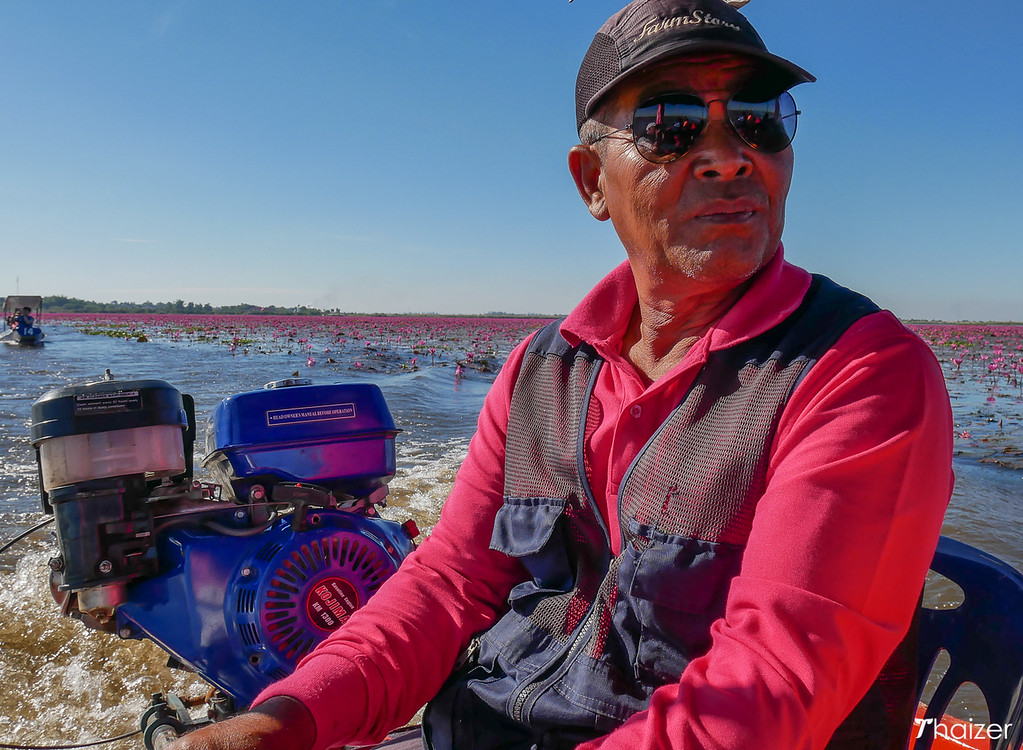 Is the lake worth visiting?

The Red Lotus Lake in Udon Thani has been on my to-do list for a number of years, but the timing of my previous visits to Udon Thani has never worked out. I’m glad I finally made it, but the lake wasn’t as spectacular as I’d been led to believe. It’s a pleasant enough trip and is worthwhile doing if you are in Udon Thani, but temper your expectations. The flowers only bloom on certain stretches of the water and you do have to travel some distance in the boat before you see them. Don’t go with romantic notions of being alone with your loved one amongst millions of lotus blooms with nothing but birdsong filling the air. Although the lake is attractive and there is plenty of bird-life on view, it isn’t particularly tranquil. The motors on the boats are noisy and the lake does get busy at weekends and on Thai holidays. Try to visit on a weekday for a more enjoyable experience.

There are coffee shops, food stalls, souvenir sellers and toilet facilities on the shore of the lake, but there isn’t too much else in the immediate vicinity.

How to get to the Red Lotus Lake

The Red Lotus Sea (Nong Han Lake Kumphawapi) is located approximately 40km south-east of Udon Thani city. The boats depart from Ban Diam on the northern part of the lake. I checked the options of getting to the lake by public transport and although it is possible, the journey from Udon Thani city centre involves a number of changes and is time consuming. There are better ways to make the trip. I recommend that you rent a vehicle and drive yourself, hire a taxi or visit the lake as part of a tour. If you are staying overnight in Udon Thani, your hotel should be able to make arrangements for you or put you in touch with somebody who can help.

Rent a car or motorbike
You can hire a car or motorbike in Udon Thani, either from the airport or in town. Make sure your travel insurance covers you if you hire a motorbike, and for a car you should have an international driving permit.

Hire a taxi
The best price I was quoted in Udon Thani city was 1,100 Baht, but the average was around 1,500 Baht. This price is for round-trip transfers, fuel and waiting time for the driver.

Group tours
Joining a group tour isn’t something I’m usually keen on doing, but on this occasion was the best option because I was travelling solo. The reception staff at my hotel, @Home at Udon, booked the trip for me. I paid 499 Baht which included pick-up from my hotel, round-trip transfers by comfortable air-conditioned mini-van, a 90-minute boat tour (big boat) of the Red Lotus Sea and return transfer to the hotel. I was picked up from the hotel at 7.30am and dropped back there in central Udon Thani at 11am. This way of doing the trip works out as excellent value and also has the advantage that you don’t have to join a long queue to get on the boat because you get preferential treatment.

Information on tours of the Red Lotus Lake is available from the Tourism Authority of Thailand (TAT) office opposite Nong Prajak Park in Udon Thani city. There is also a tourist information kiosk at UD Town, the mall close to the railway station. You may have to be patient if you don’t speak Thai, because the information is mostly geared up towards domestic tourists and not all staff are comfortable speaking English.

Where to stay in Udon Thani

There are some good value accommodation options available in Udon Thani city. I’ve had comfortable stays recently at Kavin Buri Green Hotel and @Home at Udon which are both conveniently located close to Central shopping mall and the railway station. From the centre of town to the lake is a 40-minute drive. If you want to stay nearer to the lake, check out Graham & Donlaya Homestay or Gecko Villa and Nakara Villa.