If you only visit one temple in Chiang Mai, then Wat Phra That Doi Suthep is the one to visit. And don’t just take my word for it; local people say that if you haven’t been to Doi Suthep, you haven’t been to Chiang Mai. The mountain wat that overlooks the city of Chiang Mai is not only one of the most important temples in the north of Thailand, it’s also one of the most beautiful to be found anywhere in the country. 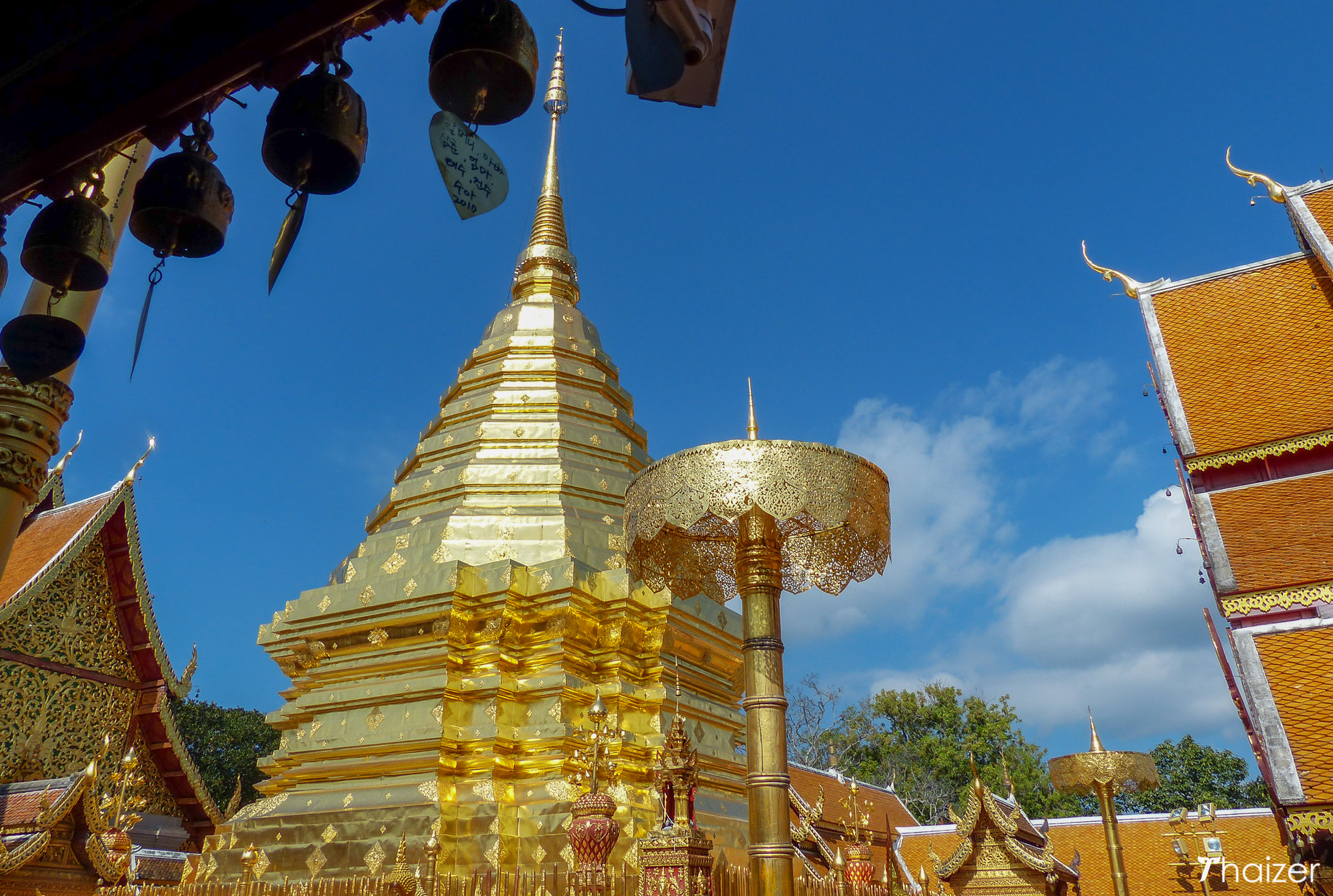 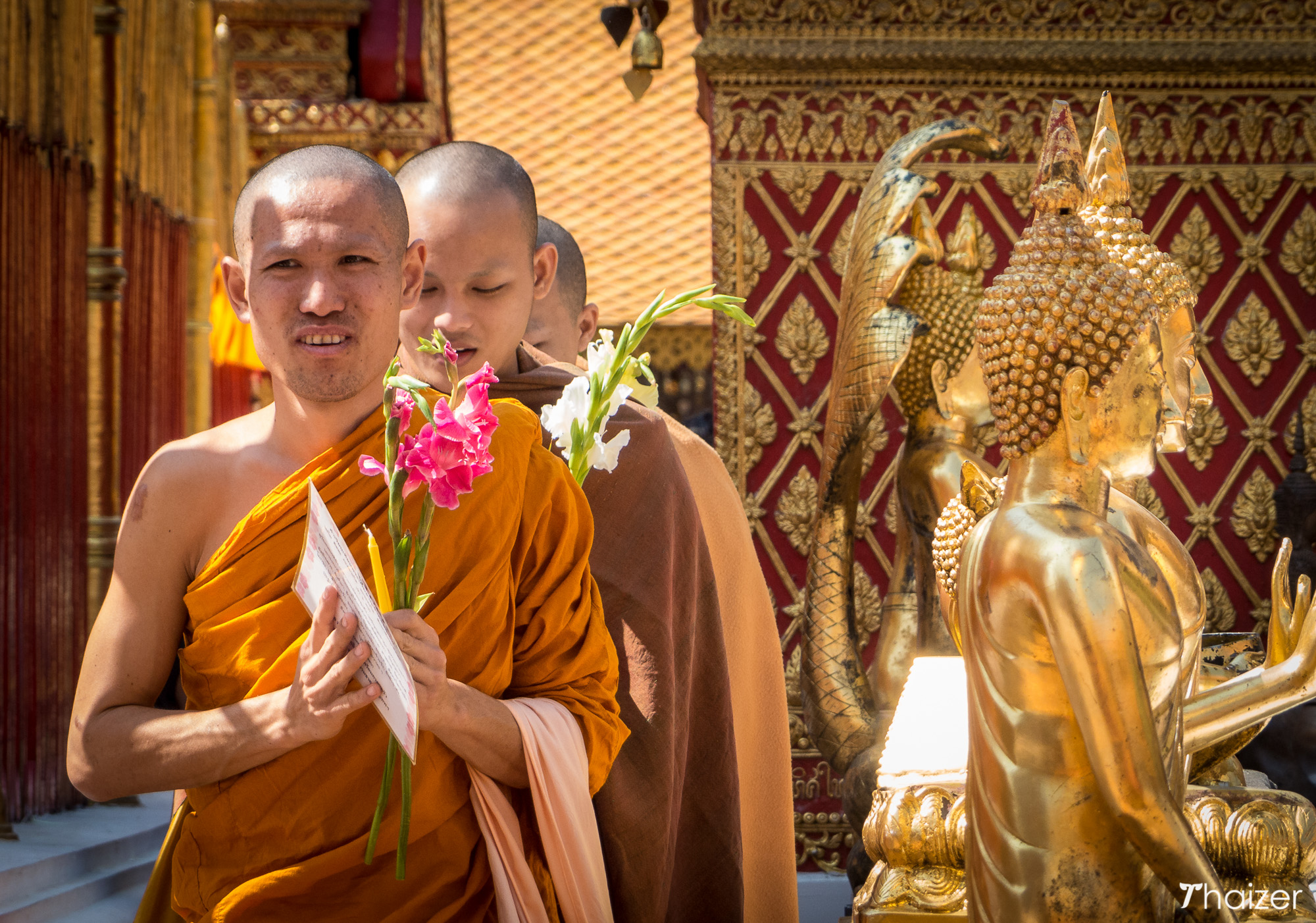 Doi Suthep
The temple is often simply referred to as Doi Suthep. In the northern Thai language, doi means mountain. Ancient local folklore says a hermit called Suthep lived on the mountain long before the temple was built and the mountain was named after him. The description ‘Wat Phra That’ is a title of respect that is often used for a Thai temple that contains relics of the Buddha. The title is given to a number of temples in Thailand including Wat Phra That Haripunchai in nearby Lamphun and Wat Phra That Woramahawiharn in the southern city of Nakhon Si Thammarat. 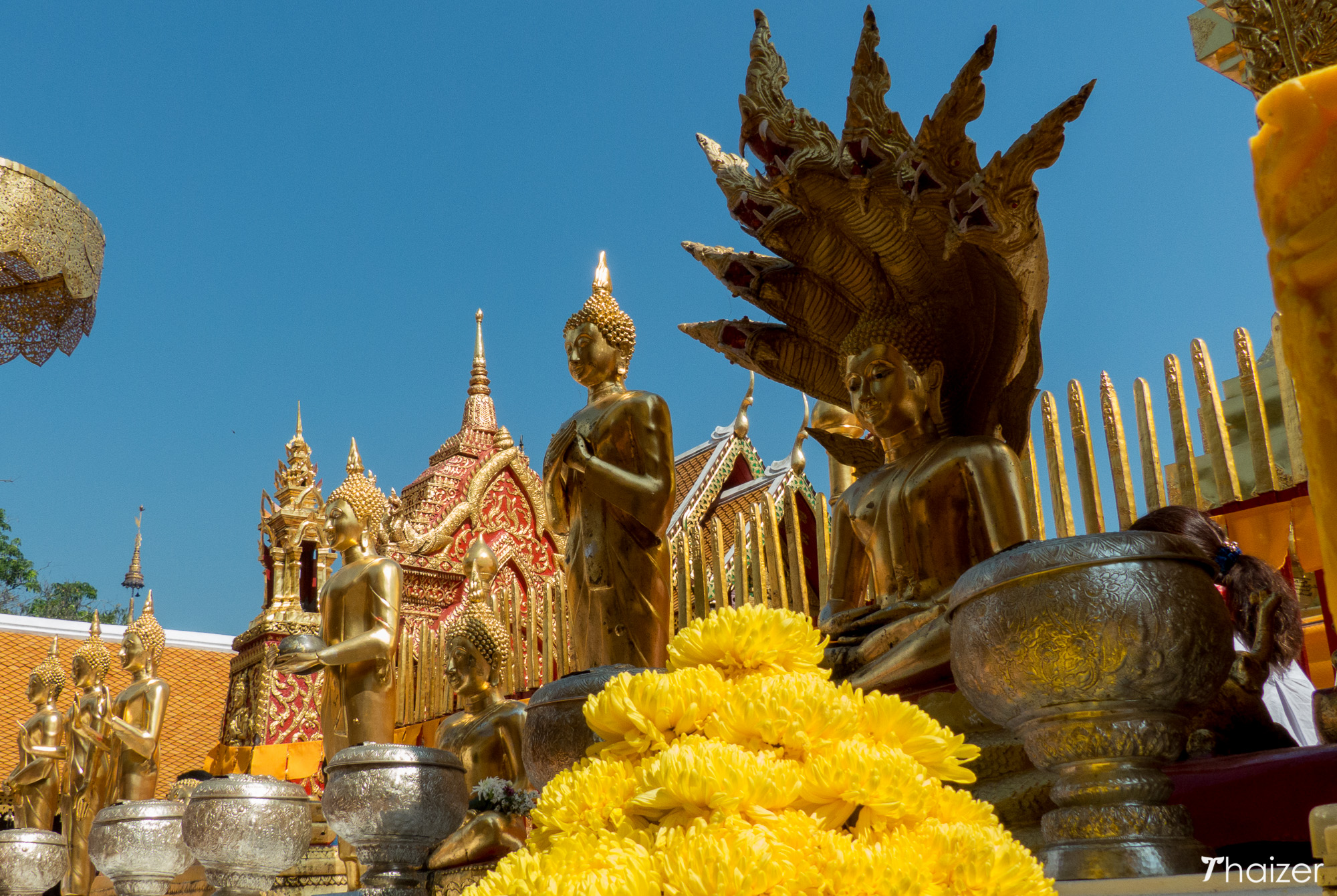 The legend of the white elephant

There are a number of different stories and legends relating to the founding of Wat Phra That Doi Suthep. The most common of these legends dates back to the mid 14th Century. It is said that a monk brought holy relics of the Buddha to King Nu Na of the Lanna Kingdom. The relics were said to be fragments of bone from the Buddha’s shoulder and were believed to have mystical powers. The king placed the relics on the back of a white elephant which was then released into the forest. The elephant climbed the mountain at Doi Suthep and, before collapsing and dying of fatigue, the sacred animal marked the spot where the relics should be enshrined by turning round three times and trumpeting three times. Although the original chedi was built by King Ku Na during the 14th Century, the present complex dates from the 16th Century and has been restored and extended at various stages over the years.

An impressive naga balustrade borders the steps that lead up to the temple. Information at the temple itself says there are 306 steps although other sources say 309. Either way, it’s a lot of steps and if you can’t manage the climb there is the option to take the funicular railway which eases passengers gently to the top. The temple complex at Wat Phra That Doi Suthep glimmers in the sunlight with the stunning architecture complemented by the picturesque mountain setting. 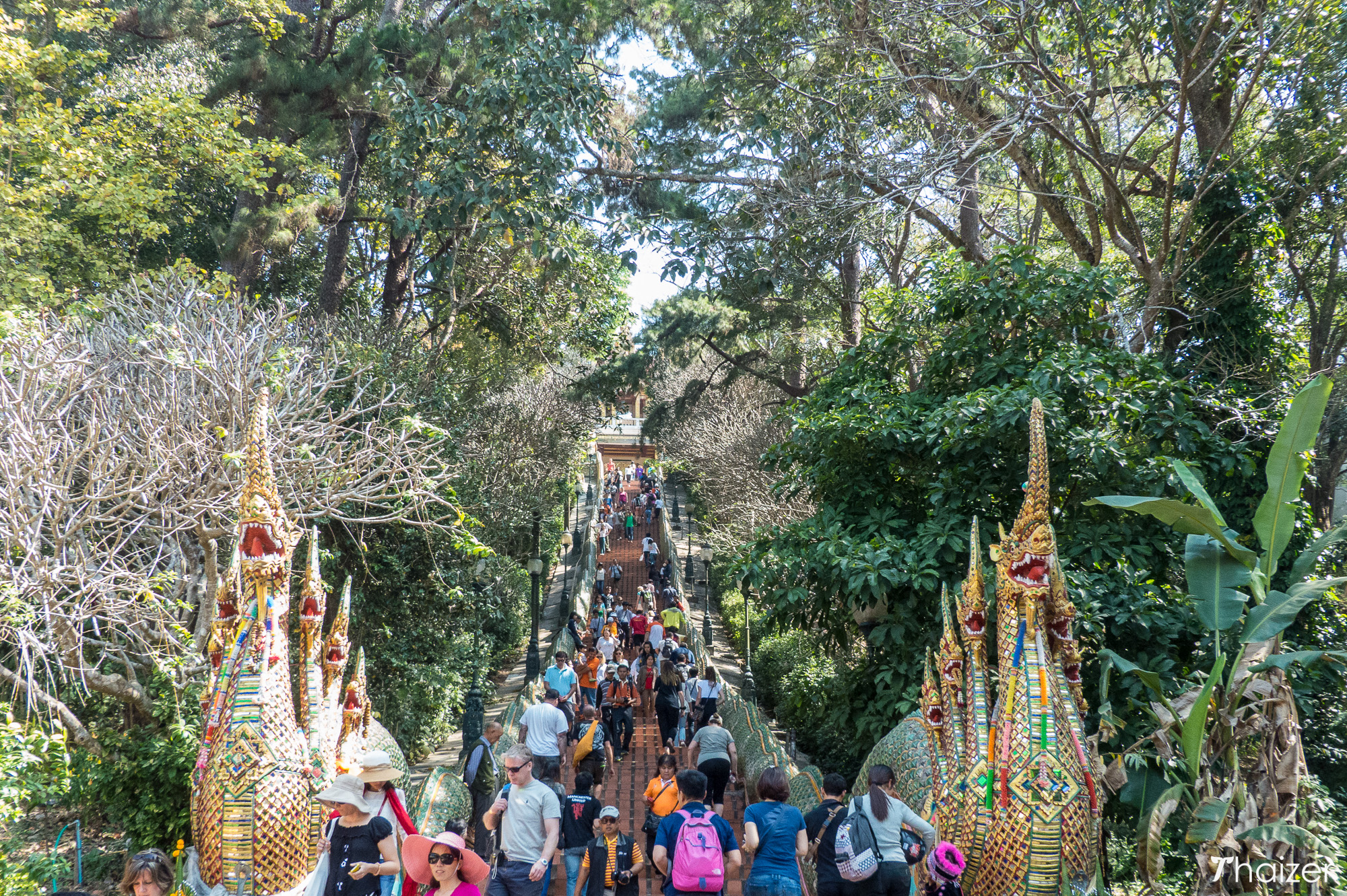 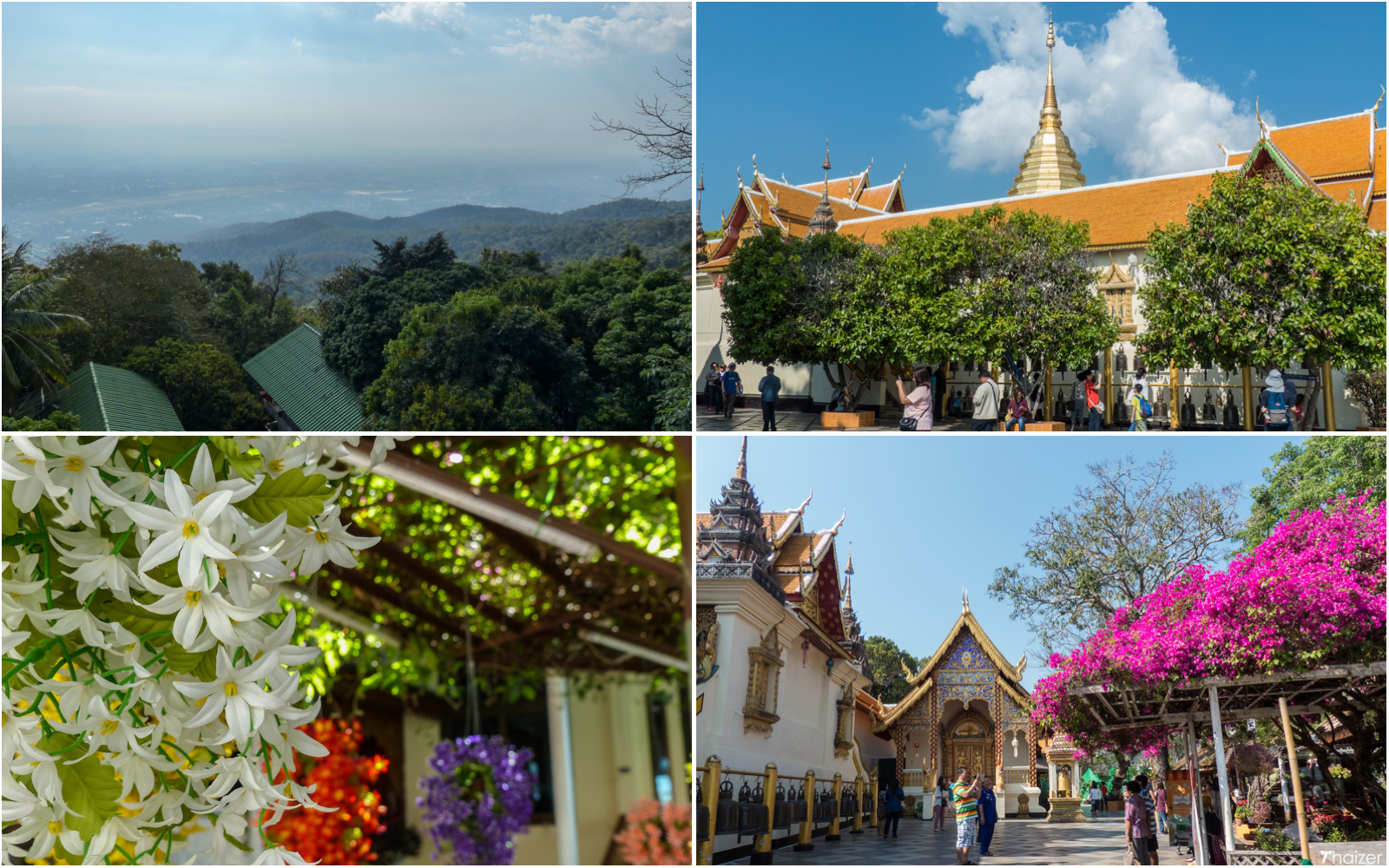 The engineer monk: Kruba Srivichai
For a number of centuries the only way to reach Wat Phra That Doi Suthep from the city of Chiang Mai below was via a long hike along a forest trail. The first paved road to the temple wasn’t constructed until the 1930s thanks to the famous engineer monk, Kruba Srivichai, and his many followers. A statue of Kruba Srivichai is located close to the naga staircase with another shrine to the monk located at the foot of the mountain at the start of the road he helped build. Some drivers will actually take both hands off the wheel and wai as they drive past the shrine at the bottom of the road. However, nervous passengers will be relieved to know it is more usual for drivers to show their respect by honking their horn instead. 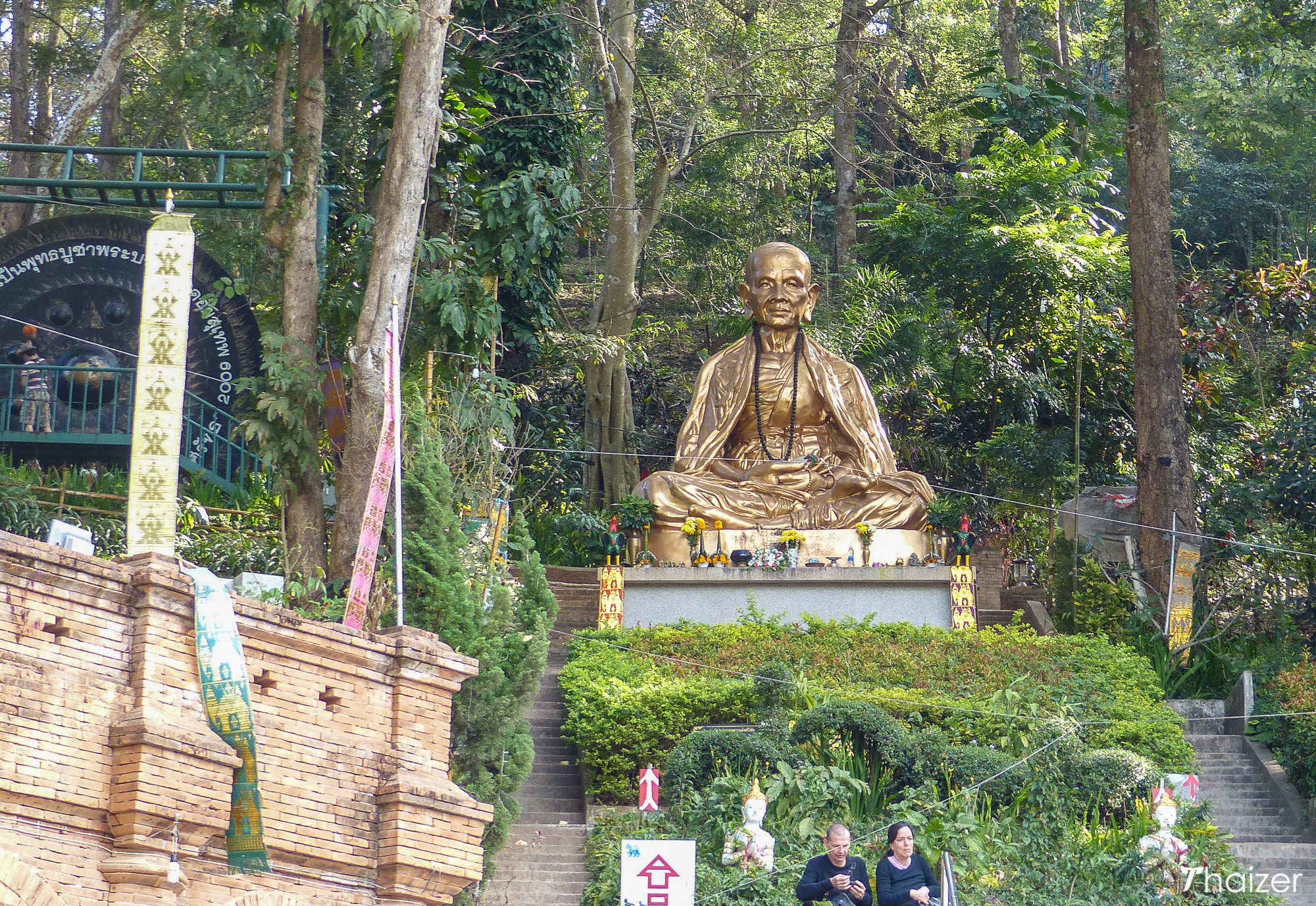 statue of Kruba Srivichai outside Wat Phra That Doi Suthep

On the eve of Visakha Bucha Day, hundreds of Buddhists make merit by walking up to Wat Phra That Doi Suthep. The exact date varies each year according to the lunar calendar, but is usually in May or June. If you like the idea of walking to the Doi Suthep temple but aren’t in town for the Viskaha Bucha event, the ‘pilgrims’ trail’ is open all year round and can be followed via Wat Palat. On average the hike will take around 90-120 minutes from the trail head which is off Suthep Road close to Chiang Mai University. It’s advisable not to make the hike by yourself just in case you do run into difficulties. Check the Doi Suthep Walkers’ Group page on Facebook for more information. I’m planning to do this hike myself soon and will post my experience when I finally get round to doing it. 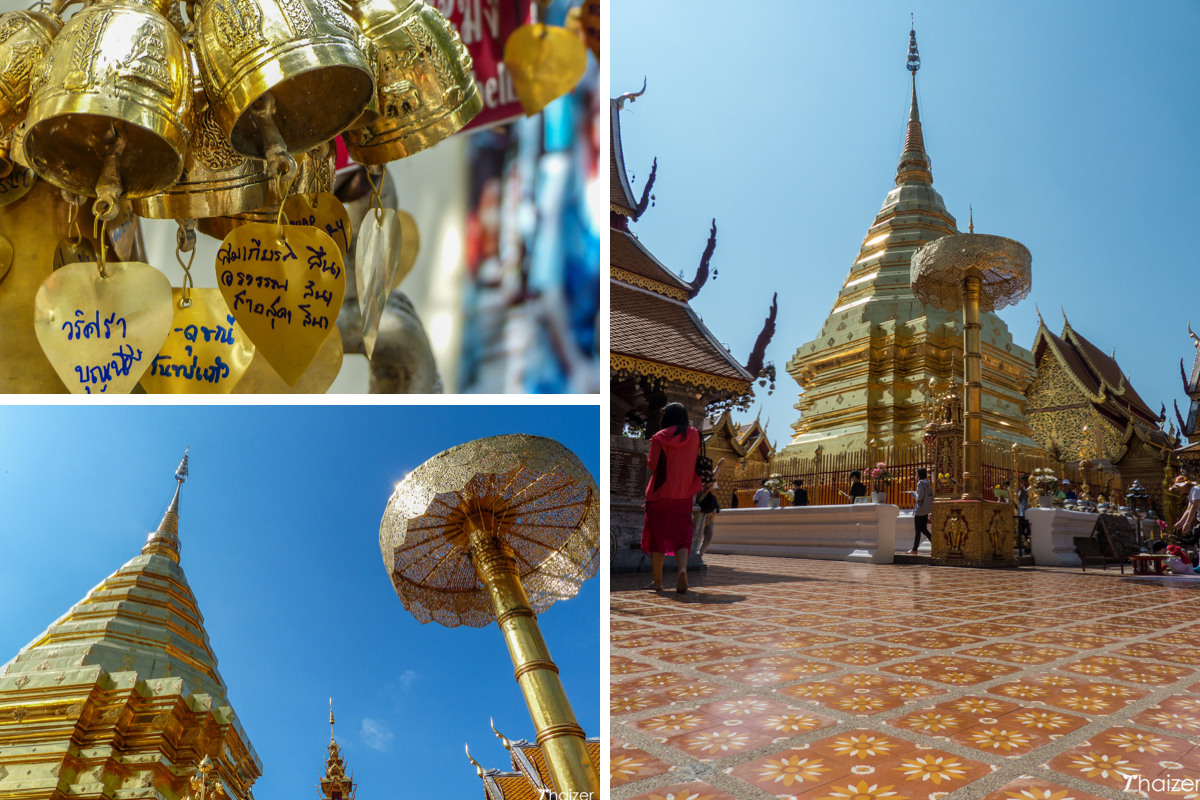 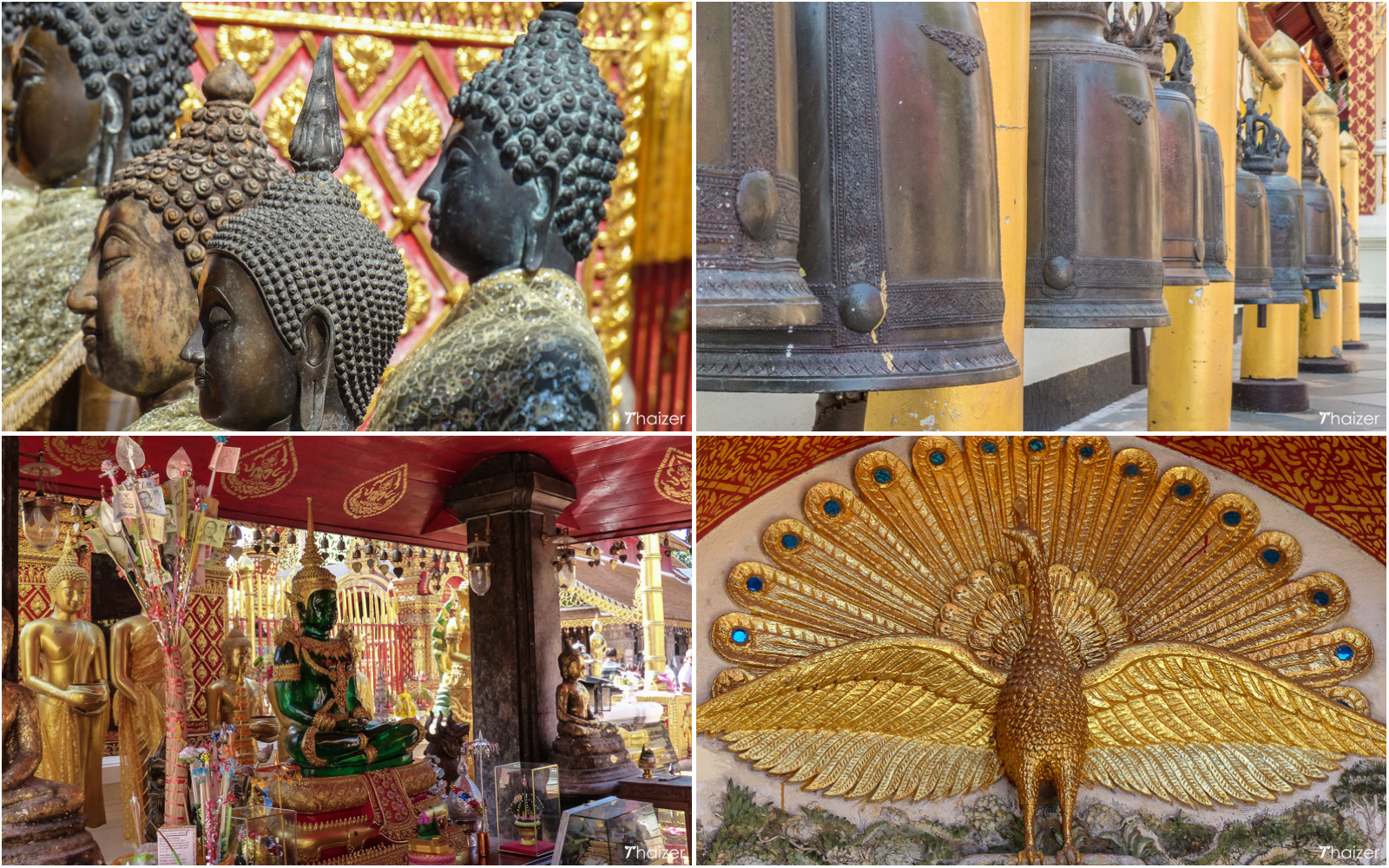 If you do make the trip to Wat Phra That Doi Suthep, it’s worth making the short journey further up the mountain to enjoy the gorgeous gardens and serenity at Bhuping Palace (also spelt as Phuping Palace). This was a favourite destination for HM the late King Bhumibol Adulyadej and as a royal palace there are strict guidelines in place relating to what you can and can’t wear. Clothing is available to hire for unsuspecting people who do fall foul of the rules.

Continue further up the mountain to take in the hill-tribe village at Doi Pui. This is a touristy village, but the scenery is attractive and there is some interesting information about the opium poppies that once flourished here and which inspired the Royal Project initiatives.

How to get to Doi Suthep

Any good Chiang Mai tour company or travel agent can arrange private return transport via songthaew or air-conditioned car/mini-bus. Arranging private transport also makes it easier for you to schedule in stops at the various viewpoints and waterfalls en route.

Independent travel is also easy enough to arrange via the regular songthaews that run from in front of Wat Phra Singh in the old town and from the Kad Suan Kaew shopping mall (usually via a change of vehicle near to Chiang Mai zoo). Songthaews will wait until they have a minimum of 8 or 10 passengers before departing up the winding hillside road that leads to the temple. In a shared songthaew from outside Chiang Mai zoo, expect to pay a minimum of 40 Baht per person each way. Starting from the base of the mountain near Chiang mai zoo, the journey to Wat Phra That Doi Suthep takes approximately 20 minutes. If you are prone to car sickness, be aware that the road does involve a number of bends and sitting in the back of a songthaew can make the effects of motion sickness worse.

Songthaew prices to and from Wat Phra That Doi Suthep

The fares below are per person in a shared songthaew.

If you are with friends or family you also have the option of hiring a songthaew as a private taxi. However, you may find it easier to do so via a travel agent in the city instead of trying to negotiate directly with a driver. Expect to pay in the region of 800 Baht for a private hire from Chiang Mai to Doi Suthep (including an hour or two waiting time and return back to the city). 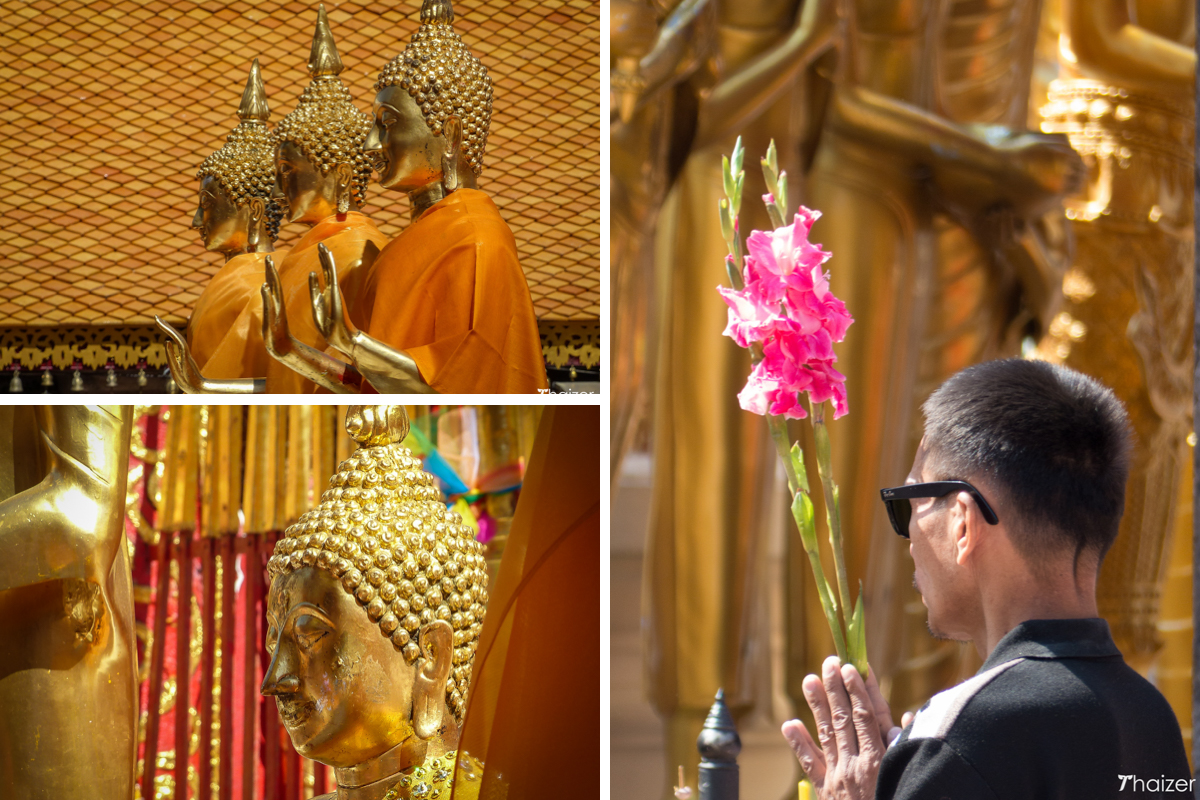 Wat Phra That Doi Suthep is officially open from 6am-5pm, but is sometimes open later. Please dress politely and cover your knees and shoulders. Before entering the platform around the Golden Chedi you must remove your shoes. Wat Phra That Doi Suthep charges a 30 Baht entrance fee for non-Thais which is paid at a booth at the top of the stairs.

The temple, and the road up the mountain, can get extremely busy during Songkran in April, on Buddhist holidays and on New Year’s Eve and New Year’s Day.

On the Trail of Food and Culture in Historic Lamphun
Next Post: Bhuping Palace, Chiang Mai