If you visit Nan there is one must-see attraction above all others; Wat Phumin. This royal temple was built by the ruler of Nan, Prachao Chetabut Phrommin, in 1596. Originally named after him and written in the local language as Wat Phrommin, somewhere in history the name became ‘Phumin’. From the outside, the temple may appear similar to many others seen in Thailand, but a closer look reveals the temple has been subtly designed to look like it is being supported by two giant guardian serpents or nagas. But it is only once inside the wat that the full beauty of the temple is revealed. 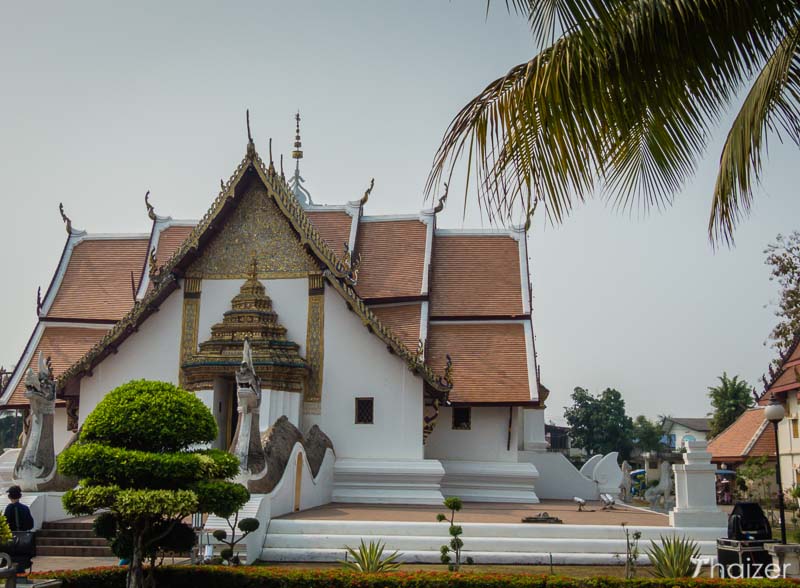 The cross-like design of the building means that entering via any one of the four elegantly carved doors the eye is drawn to the central dais and the four golden Buddha images that look out to the north, south, east and west. Teak pillars surround the Buddhas and support the roof. Wat Phumin was renovated from 1867 to 1875 and it was during this time the murals which have made the temple so famous in Thailand were commissioned by the last king of Nan.

The wall paintings at Wat Phumin depict scenes from the Buddhist Jataka stories which represent the past lives of Buddha. More importantly perhaps, the murals are a historical record of life in Nan showing scenes of everyday life and the traditions of the Thai Lue people who had settled in the area. The distinctive murals are the work of Thai Lue artist, Thit Buaphan and took him more than 20 years to complete. The most famous mural scene was labelled by the artist in the local dialect as ‘Poo Marn Yar Marn‘ (‘Whispering of Love’) but has become better known to most Thais as ‘Grasip‘ which translates to English as the ‘Whispering’.

Although it’s the ‘Whispering’ which attracts the attention of most tourists and photographers, all of the murals provide intriguing details of life in Nan in the 1800s. Some of the murals may have faded, but they still retain their sense of history and local identity. The paintings show the style of dress, the type of haircut and even the hand-rolled cheroots that were smoked during that era. If you have more time to study them, you’ll also notice that the murals provide a powerful social commentary with some subtle messages about how the inhabitants of Nan viewed the outside world including the arrival of the French to the region. The murals were painted at a time when the formerly independent kingdom of Nan was losing territory to the French as it became incorporated into Siam.

Outside the temple, you can watch local artists re-creating some of the scenes from the murals together with some clever contemporary twists on the classic ‘Whispering’ image. These paintings together with some smaller souvenir items like post-cards, t-shirts and key rings can be bought from the stalls dotted around the grounds of Wat Phumin. Unlike many other tourist locations in Thailand, Wat Phumin (and Nan in general) is mainly visited by Thai tourists which can make the appearance of a foreigner a bit of a novelty so don’t be surprised if you are invited by Thais to become part of their group photo.

Visitors are allowed to take photographs of the murals but not permitted to use flash. Wat Phumin is open daily from 07.00-19.00. Entry is free but you will notice that most Thais make a donation of at least 20 Baht to the temple to make merit. Even if you aren’t Buddhist you can still put some money in one of the donation boxes.