Sukhothai has a rich history and a there are a number of significant sites dotted around the Sukhothai Historical Park. One of the most photographed of those sites is Wat Si Chum (Temple of the Bodhi Tree) with its giant seated Buddha image.

The Buddha figure here is known by two different names. The name ‘Phra Achana‘ translates to ‘Buddha who is not afraid’ whilst the other name, ‘Phra Poot Dai’ means the ‘speaking Buddha’. It is this second name that gives an indication of the role this Buddha image and temple played in ancient Sukhothai at a time when different rulers fought for control of various parts of Siam (Thailand). One of those rulers, King Naresuan (1555-1605), was known for his campaigns against the Burmese who ruled parts of Siam during his time. According to legend, before one battle King Naresuan set up camp at Wat Si Chum in Sukhothai. With his army low on confidence, King Naresuan selected one of his soldiers to stand behind the Buddha image and make a speech. With the Buddha figure appearing to talk directly to the troops it boosted the morale of Naresuan’s army. There is a ‘secret staircase’ to the side of the Buddha which leads to a small opening where somebody could stand to make a speech without being seen by anybody else in attendance at the temple and with the acoustics it would give the impression it was the Buddha speaking. Variations on the story say that the king himself made the speech whilst other stories tell of the Burmese army fleeing in fear when they saw the Buddha figure at Wat Si Chum.

The original temple was constructed approximately 700 years’ ago, but after falling into ruin was reconstructed in the 1950s. Approaching Wat Si Chum on foot, visitors catch their first tantalising glimpse of the sitting Buddha which peers through the slit in the specially designed mondop. The brick and plaster Buddha figure presents an imposing sight. At over 11 metres wide and almost 15 metres high, the ‘Phra Achana’ figure dominates the roofless building where it is housed. This means there is limited space for visitors, but this just serves to add to the experience. The staircase enclosed within the 3-metre thick walls to the left of the image is usually closed to tourists, but look for the elegantly tapered fingernails in classic Sukhothai-style. Buddhists place gold-leaf on the fingers when making merit and the hands of this Buddha are one of the most well-known images of Thailand reproduced on postcards and paintings. 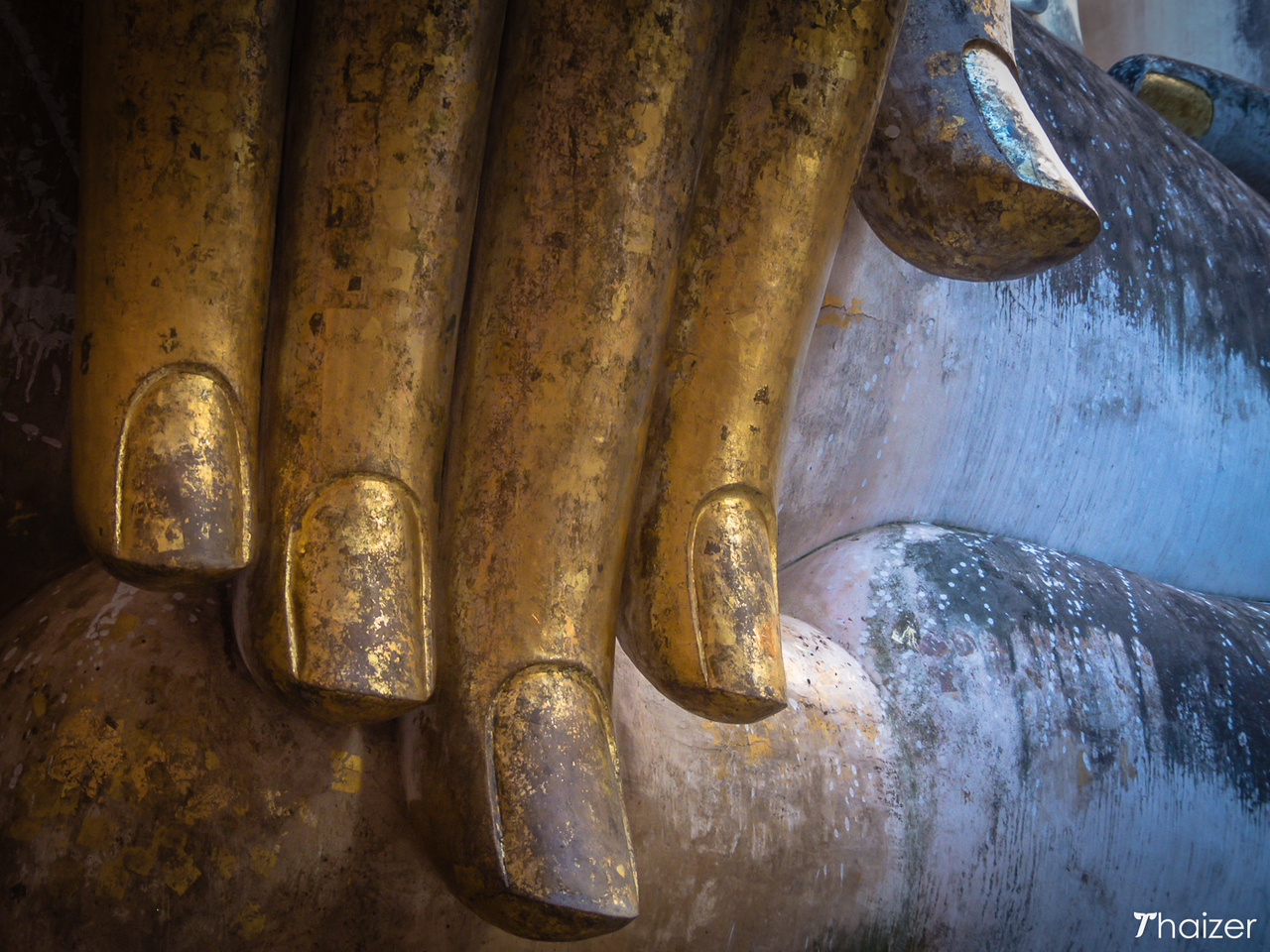 Wat Si Chum is located in the northern zone of Sukhothai Historical Park an easy 10-minute bicycle ride away from the main central zone. Open daily from 07.00-17.30 the entrance fee is 100 Baht for non-Thais (20 Baht for Thai people).