One of the most important temples in Ayutthaya, Wat Yai Chai Mongkhon has a long and illustrious history. And unlike many of the other ancient sites in Ayutthaya, this is still an active temple where monks reside. Thai people visit Wat Yai Chai Mongkhon to not only pay respects to Buddha, but also to pay homage to one of the most respected kings in Thai history, King Naresuan the Great. 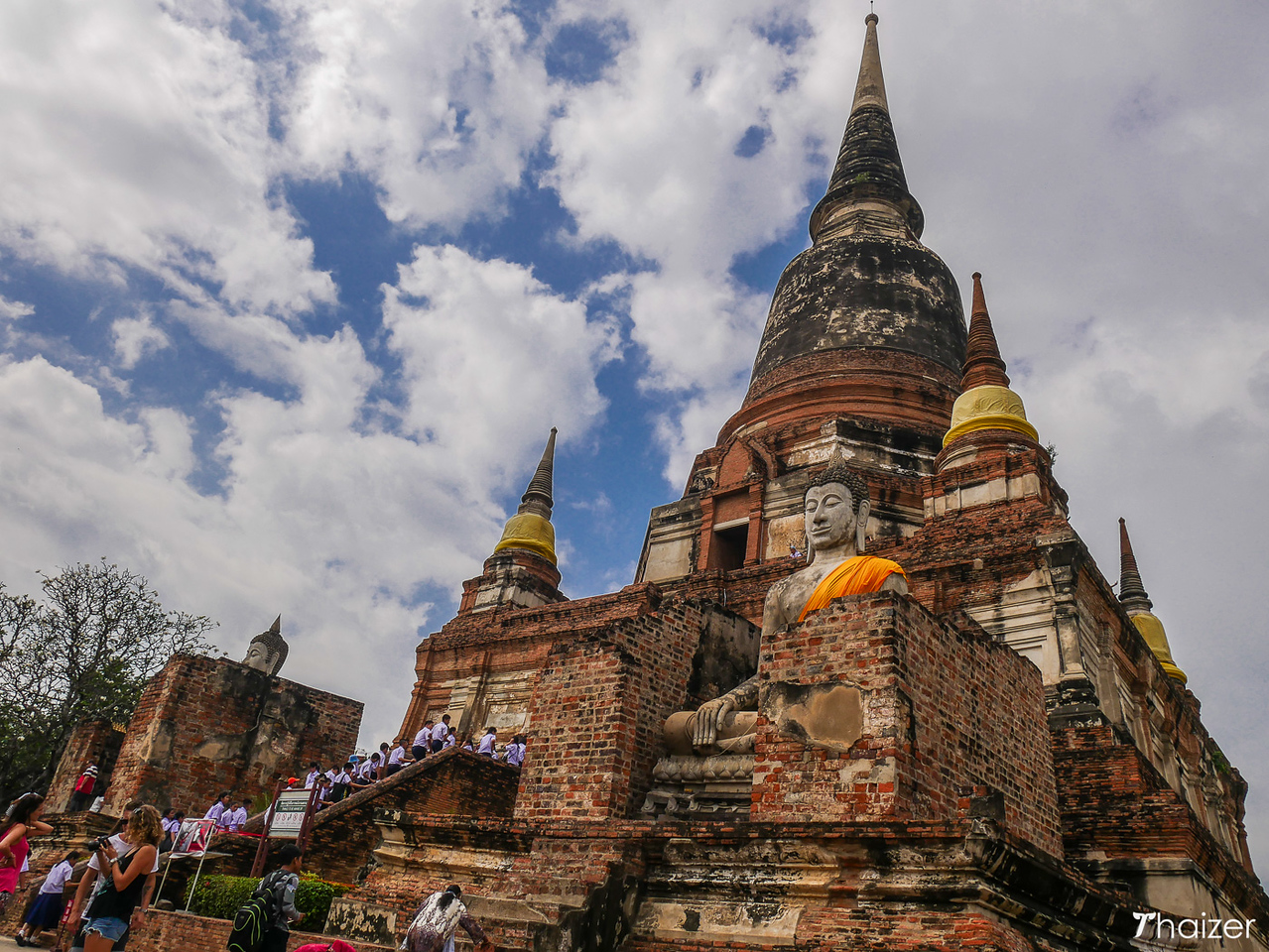 Before Ayutthaya was established, historians believe the original site of Wat Yai Chai Mongkhon may have been an important Khmer temple complex. Different temples were subsequently built here which bear a number of different names. When Ayutthaya was established as the capital of Siam in 1350, King U-thong proclaimed the site as the royal temple and it was known as Wat Chao Phraya Thai. After King Naresuan repelled a Burmese invasion in 1593, restoration work was carried out at the temple and historians believe it was at this time that the main chedi was enlarged and at some stage thereafter the temple became known as Wat Yai Chai Mongkhon which translates as the ‘Great Monastery of Auspicious Victory’. 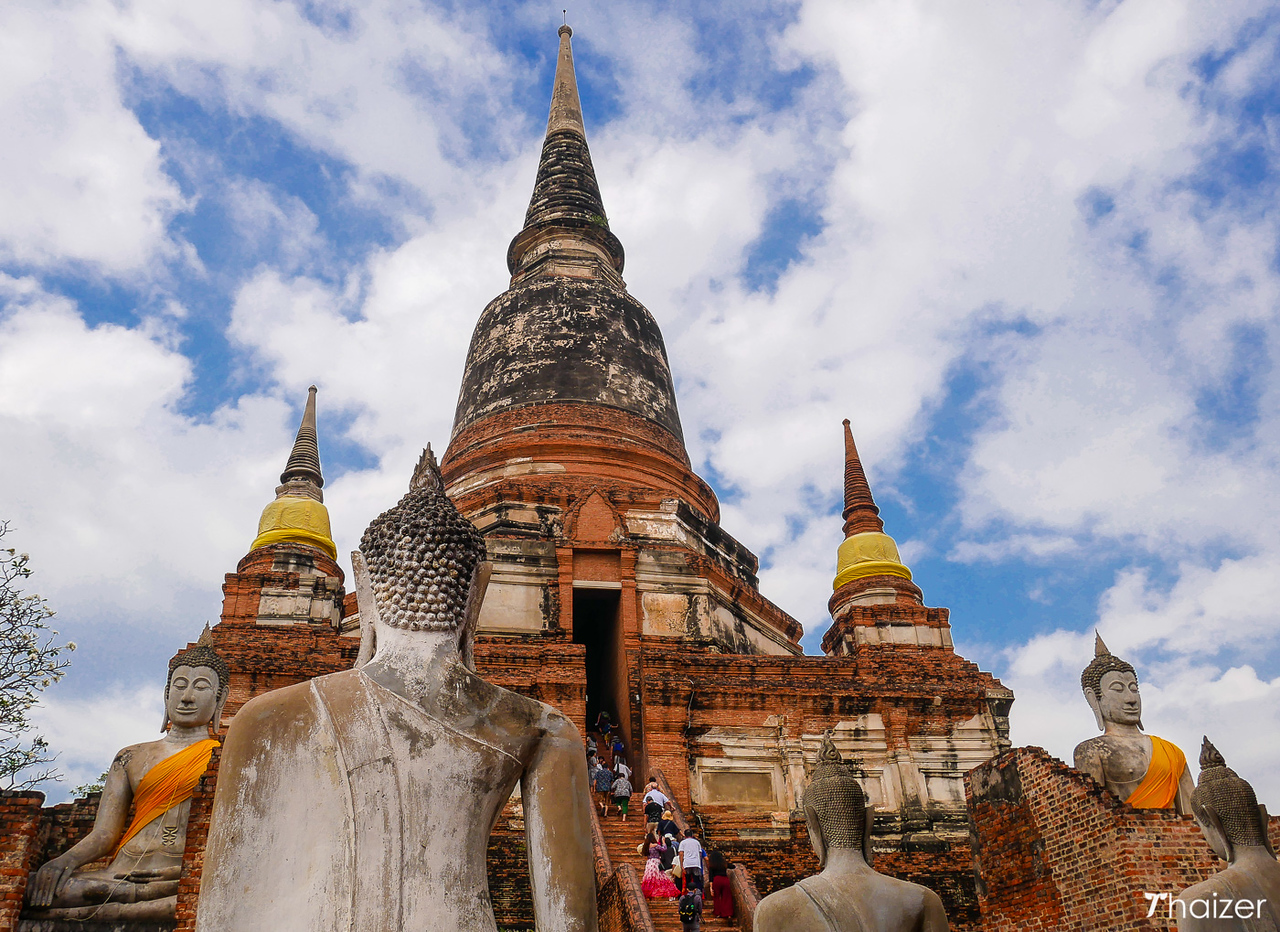 When Ayutthaya eventually fell to the Burmese in 1767 the temple was looted and was subsequently left abandoned. It wasn’t until the 1950s that a monastery was reestablished on the site. Since then, there has been major restoration work and most of the stone Buddha images that can be seen today are relatively modern. 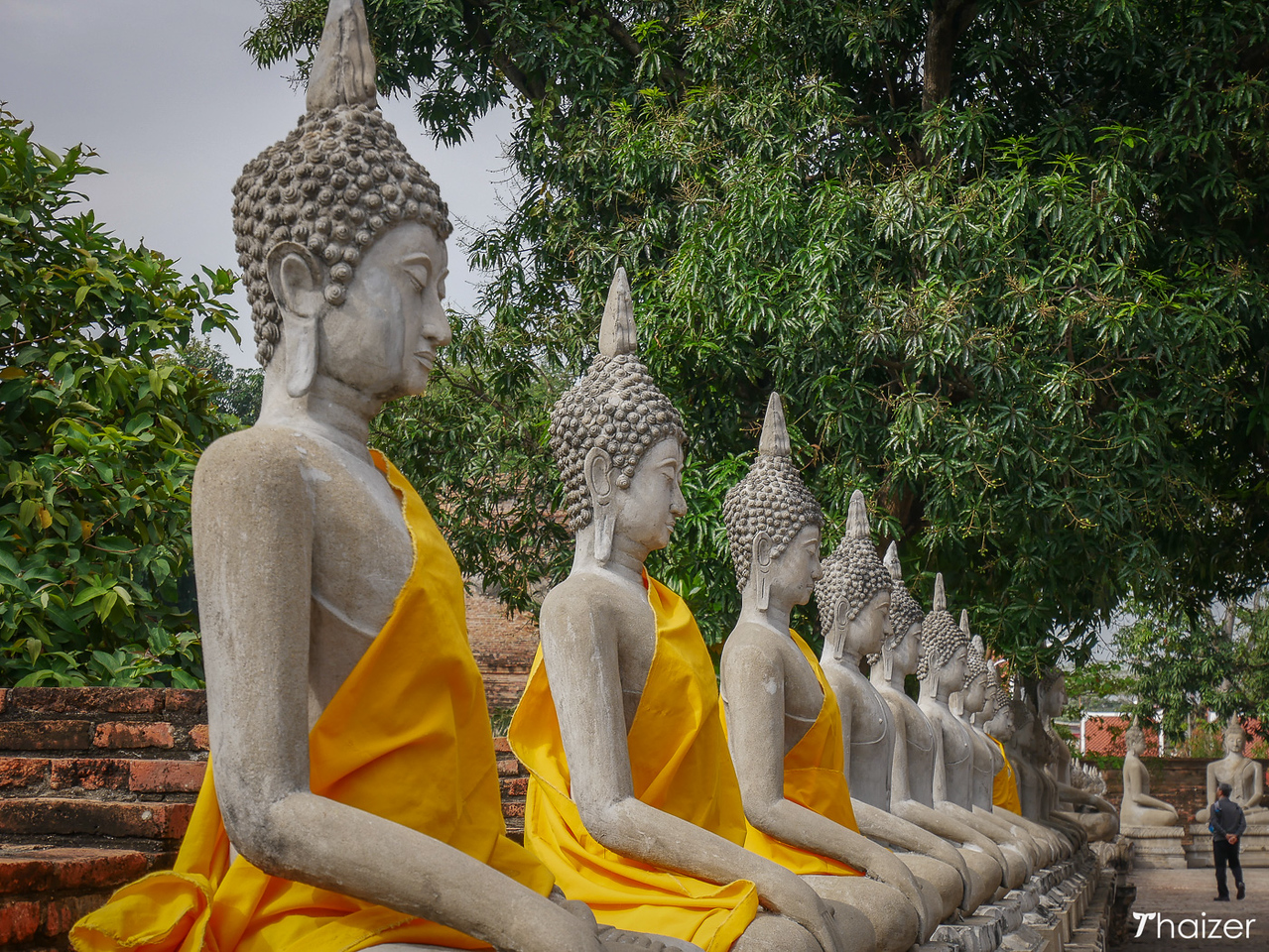 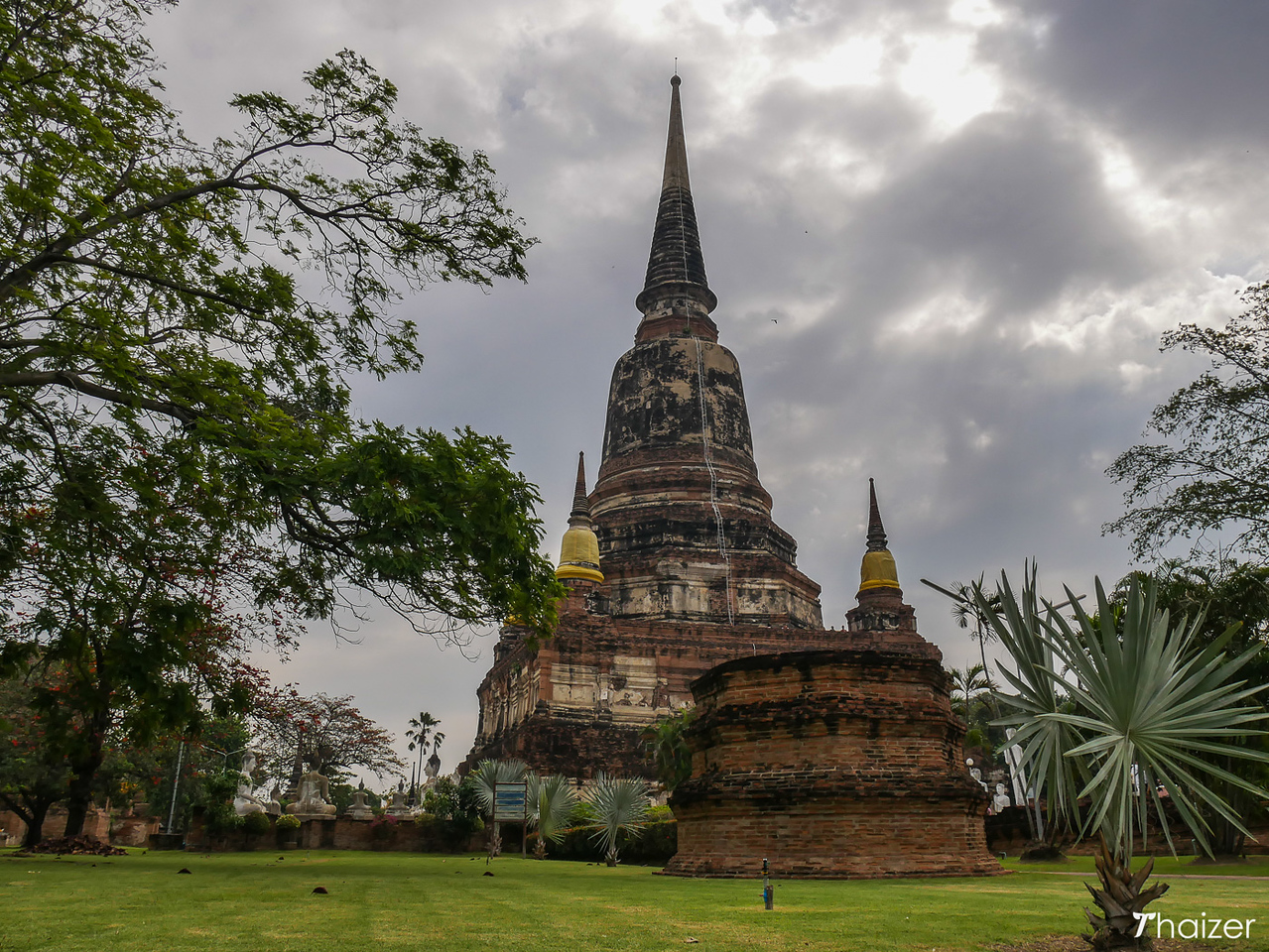 Main chedi
The main bell-shaped chedi at Wat Yai Chai Mongkhon is one of the distinctive landmarks of Ayutthaya. Visitors can climb the steps that lead up to a platform for views over the temple complex. A rectangular gallery surrounds the chedi and is lined with dozens of stone Buddha images. The originals would have been covered in gold, but today saffron coloured sashes are used instead. Although these aren’t the original statues visitors should still treat them with respect. Two tourists were recently photographed at the temple standing on one of the stone Buddha images and Thai authorities are trying to track them down so that they can be prosecuted.

Reclining Buddha
The original reclining Buddha statue was constructed during the reign of King Naresuan and was located in a building known as Wihan Phra Phuttha Saiyat. The statue seen today is impressive, but is a replica that was made in the 1960s.

Ordination hall
In the late 1970s a new ordination hall was built on the site of the original. Parts of the old structure are still visible and the hall is home to the Phra Phuttha Chaiya Mongkhon statue, one of the most sacred Buddha images in Ayutthaya. 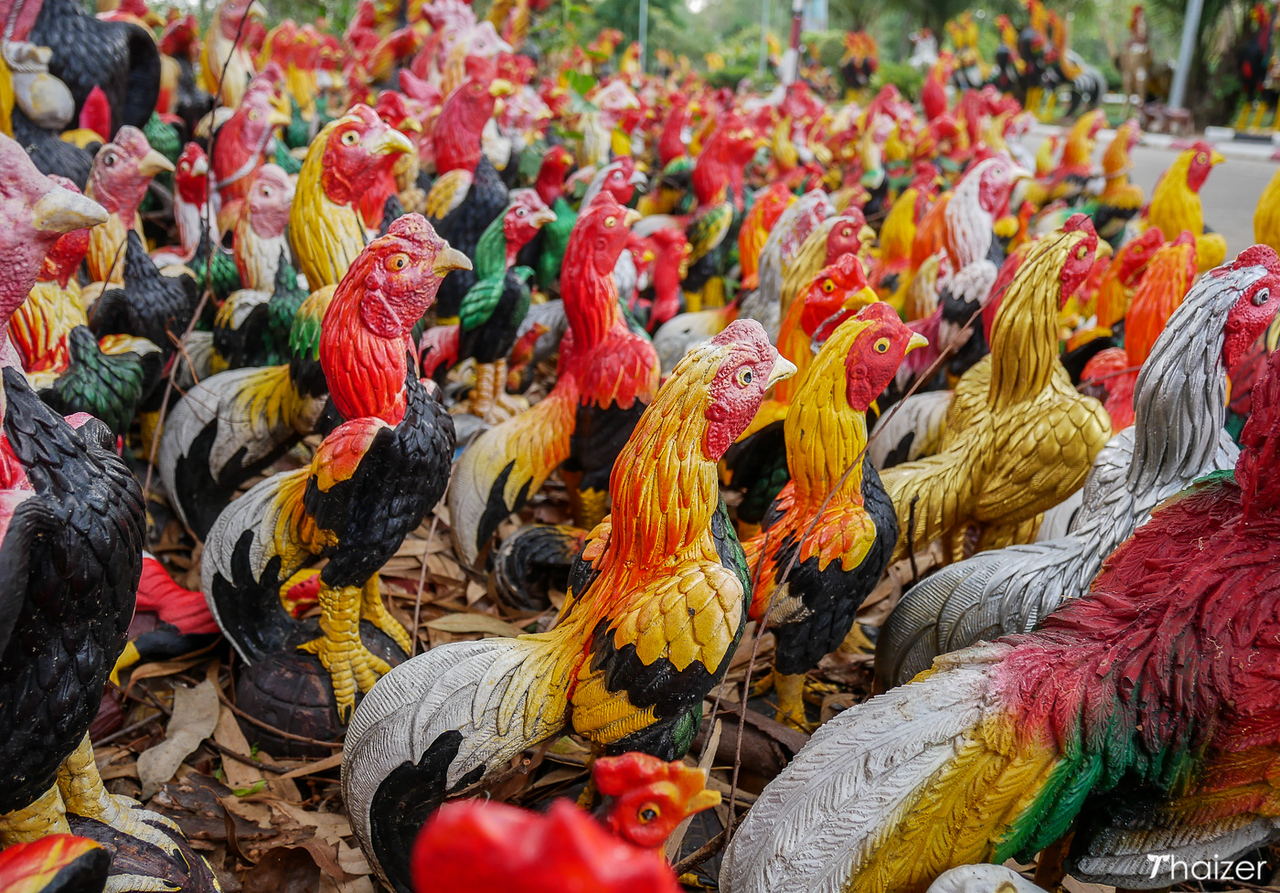 Wat Yai Chai Mongkhon is open daily from 8am-5pm. Entry for non-Thais is 20 Baht (free for Thai people). In addition to being an important historical site, this is still an active temple and visitors are asked to dress politely and act respectfully.