What is the Biggest Danger for Visitors to Thailand?

From what I’ve seen and heard, it is probably Thailand’s roads that present the biggest danger. The same can probably be said of many nations, but I think there are a number of reasons why this is the case in Thailand.

Crossing any road in Thailand can be a precarious affair. Even when the lights are red, there will be a number of vehicles that continue to drive on. As I’ve found out on more than one occasion, designated pedestrian crossings aren’t always safe places to cross. Don’t assume all drivers are going to slow down when they see the stop light.

The law of averages dictates that the sheer volume of motorbikes on the roads will mean that a high figure will be involved in accidents. 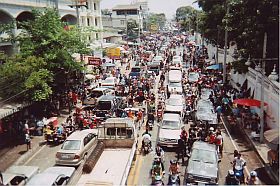 Added to this, many people (the majority) do not wear crash helmets although legally required to do so. Overcrowded motorbikes (3 or 4 people on one bike is common) and young, inexperienced riders adds to the problem. When it’s 100°F and 90% humidity you don’t really want to be wearing motorbike leathers, but if you’re wearing shorts, t-shirt and flip-flops, any minor accident can be potentially very serious.

I’m going to make a sweeping generalisation, but it’s a personal opinion based on my own experiences over the years I’ve been here. Thai people appear to have a very indifferent attitude towards road safety. It’s the same indifference that in other areas of life makes it such a charming place to live. I don’t know whether it’s something to do with the Buddhist character, the whole mai pen rai thing or the general easy-going lifestyle.

I appreciate that drink-driving is an issue in many countries in the world. I can’t quote statistics for Thailand that state whether it is better or worse than other places in this regard, but I can relate an article that appeared in the Bangkok Post newspaper shortly before the Songkran holidays this year:

Highway police bought 140,000 packets of super-sour lollies with the 200,000 Baht (approx. $5,800) that was donated by the abbot of a wat in Hua Hin. The lollies were to be distributed to drivers from April 11-17 (Songkran holiday period). A police Lieutenant Colonel said the lollies were especially sour and would “wake drivers up instantly . . . The idea is to help drivers who are both tired and who may have drunk too much.”

On Saturday April 7th, 2,999 monks gathered at a wat to bless the lollies.

I kid you not.

Before I came to Thailand, the most nervous I’d been in a vehicle was in a taxi in Milan driven by somebody who was either auditioning for a part in the ‘Italian Job’ or who was a test driver for Ferrari in a previous life. Unlike their Italian counterparts, there is no road rage from Thai taxi drivers. No flamboyant hand signals, no obscene gesticulations and no incessant tooting of the horn. All is calm and zen-like . . . except for the driving style. Very often it’s foot to the floor, tailgate the driver in front and undertake and overtake at will with more glances towards the Buddha figure on the dashboard than the rear-view mirror.

There are some excellent roads and highways in Thailand, but equally there are many in a state of disrepair. Given the number of motorbikes, any small pot-holes which the driver doesn’t notice can be potentially fatal.

I’ve done it myself on a couple of occasions; pulled away in my car at night and driven a few yards before realising I haven’t switched on my lights. But in Thailand, ninja-style driving seems to be a national epidemic.

There is nowhere else I’d rather live than Thailand, but it doesn’t mean I have to view everything here with rose-tinted spectacles. There is much that is wonderful, but not everything is perfect. The last thing I want is to sound like another moaning farang, but I hope that I’ve pointed out a few things to be aware of, particularly if you will be driving a car or motorbike in Thailand.