It’s fair to say that the average Thai person likes to party and have sanuk so why have just one New Year party when you can have three. Thailand ushers in the New Year on the first day of January and celebrates again just a matter of weeks later with the Chinese New Year, but the biggest party is reserved for Songkran, the welcoming in of the traditional Thai New Year in April.

In Thailand, December 31 and January 1 are public holidays with notable New Year ‘Countdown’ events taking place in Bangkok, Chiang Mai and Pattaya to name just three. Wherever you are in Thailand for the New Year you won’t have to look too hard to find a party or a celebratory event. Music concerts, firework displays and temple fairs are held in most provinces of Thailand at the end of the calendar year. For Thai Buddhists, the New Year is a chance to reflect on the old year and wish for good luck for the year ahead. It’s a time to make merit with a number of temples holding religious events and chanting ceremonies that take place on the evening of December 31 and continue into the early hours of New Year’s Day. 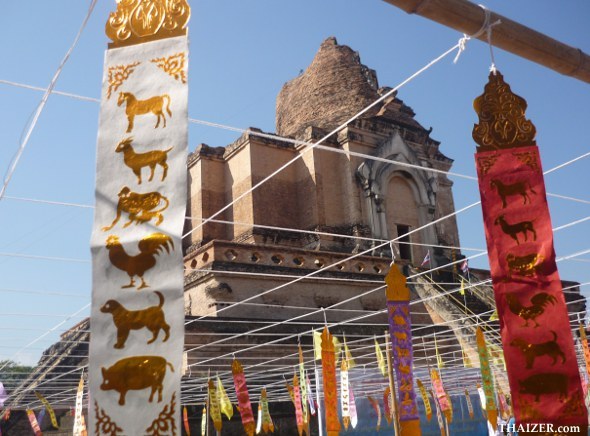 For tourists, it’s a great time to be in Thailand with so many celebratory events taking place in different regions although greater demand for hotels and guest-houses means that prices for accommodation tend to be higher during this peak in the tourist high season. It’s also a peak time for travel for local people with Bangkok in particular seeing a mass exodus of workers and residents. For many workers in the Thai capital, the New Year holiday and the Songkran holiday might be the only time in the year they get an opportunity to visit family and friends back in their home provinces. Long distance buses and trains get booked out in advance on some routes and traffic jams heading north out of Bangkok are common for the New Year getaway.

If you are planning long-distance travel in Thailand (especially out of Bangkok) in the run-up to the New Year holiday or in and around the Songkran period, it’s a good idea to book transport well in advance. The same is true for accommodation; book in advance to avoid disappointment.

The Chinese Lunar New Year isn’t a public holiday in Thailand, but with such a high percentage of Thai people having Chinese ancestry it’s still an event that is celebrated with gusto in a number of areas. The exact date of the Chinese New Year varies from year to year according to the lunar cycle, falling in January or February. Amongst the good places to experience the event in Thailand are Bangkok’s Chinatown, Chiang Mai (especially Waworot Market area), Trang and Phuket, but there’ll also be many other events in various locales in Thailand.

The Songkran Water Festival is the biggest and most exuberant of all the festivals in Thailand. This nationwide party and public holiday is celebrated in the middle of April to welcome in the traditional Thai New Year. It’s a time for religious merit-making activities at local temples amidst the general water-throwing mayhem that takes place all around.