Sitting at the very heart of Bangkok, the Lak Mueang or ‘city pillar’ is often overlooked by overseas visitors who come to see the better known attractions nearby such as the Grand Palace, Temple of the Emerald Buddha and Wat Pho. The Bangkok City Pillar Shrine may lack the more obvious grandeur and spectacle of its near neighbours, but it is historically and culturally one of the most significant locations in the Thai capital. 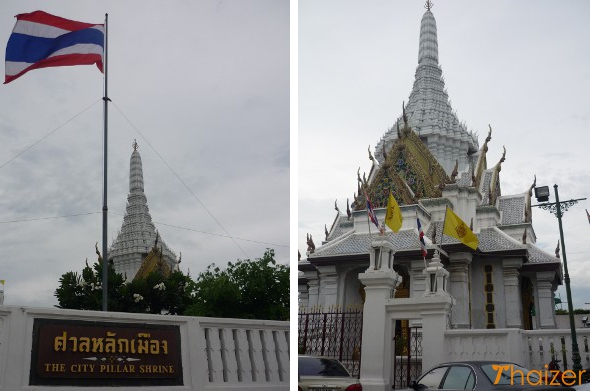 King Rama I and Old Bangkok

in 1782, the first king of the Chakri Dynasty, King Rama I, moved his capital from Thonburi to the other side of the Chao Phraya River. The new city would be easier to defend with Rattanakosin Island at its heart. This is the district referred to as ‘Old Bangkok’ where the Grand Palace is located, but the first building constructed at the new capital was the Lak Mueang city pillar. The Grand Palace and all of the other temples and buildings would follow later, but preparing a shrine for Phra Lak Mueang, the guardian spirit who protects the city, was the most important thing for King Rama I to do when establishing Bangkok as his new capital. To this day, Bangkok residents and Thai people visiting the city continue to pay their respects at Lak Mueang.

The original wooden pillar has been restored and is now covered in lacquer and gold. This is the taller of the two columns shown on the right in the photo below. The shorter column to the left was a new city pillar put in place under the instruction of King Mongkut (King Rama IV) in 1852. Just as the original pillar contained a document marking out the city’s horoscope, so too did the new pillar which was believed to provide better protection for Bangkok and the rest of the country at a time when Siam was wary of the colonial powers in the Asia region. 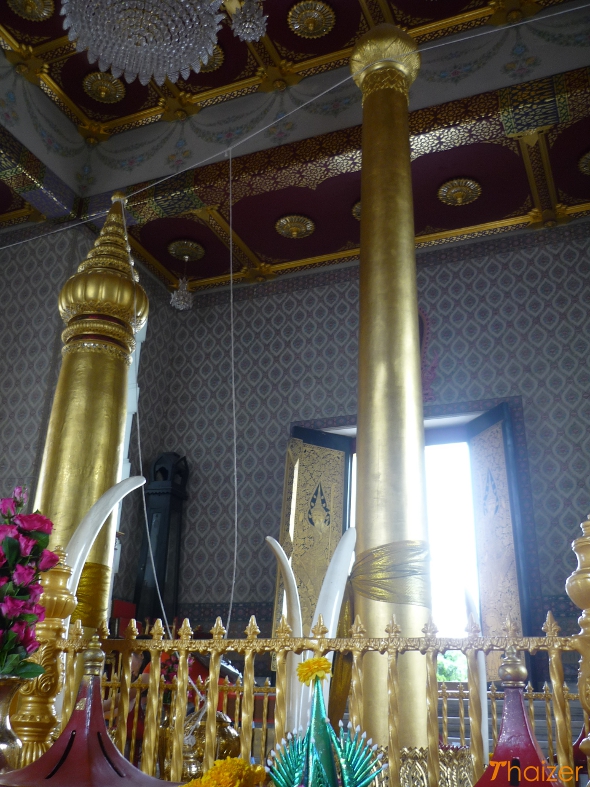 The shrine is free to enter and is open daily from 06.30 to 18.00. Because of the importance of the shrine, visitors should dress respectfully and make sure their shoulders and knees are covered. Just a few yards away from the shrine containing the city pillar is another shrine which contains images of the five other deities which are said to protect Bangkok. Thai people come here to pray and make wishes so please be respectful when taking photos.

Bangkok Lak Mueang City Pillar Shrine is located opposite the walled complex of the Grand Palace and Wat Phra Kaeo and adjacent to the Defence Ministry (shown below) on the corner where Na Phralan road meets Sanam Chai. 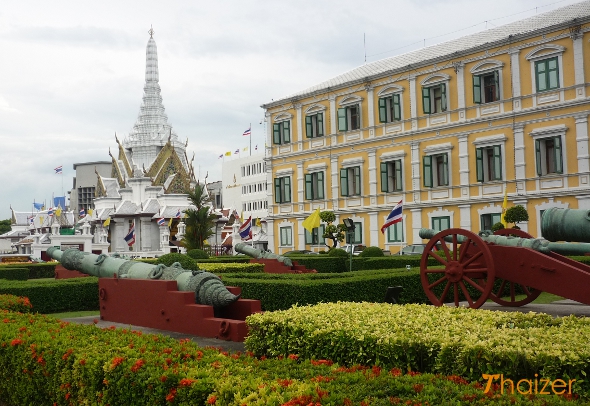 Ministry of Defence building with Lak Mueang shrine to the left