The world’s largest elephant art exhibition has arrived back in its spiritual home of Chiang Mai. Designed by Thai and international artists, around 90 elaborately painted elephant statues that make up the Elephant Parade went on display at venues around Chiang Mai earlier this month. The elephants will be in place until January 15, 2017. 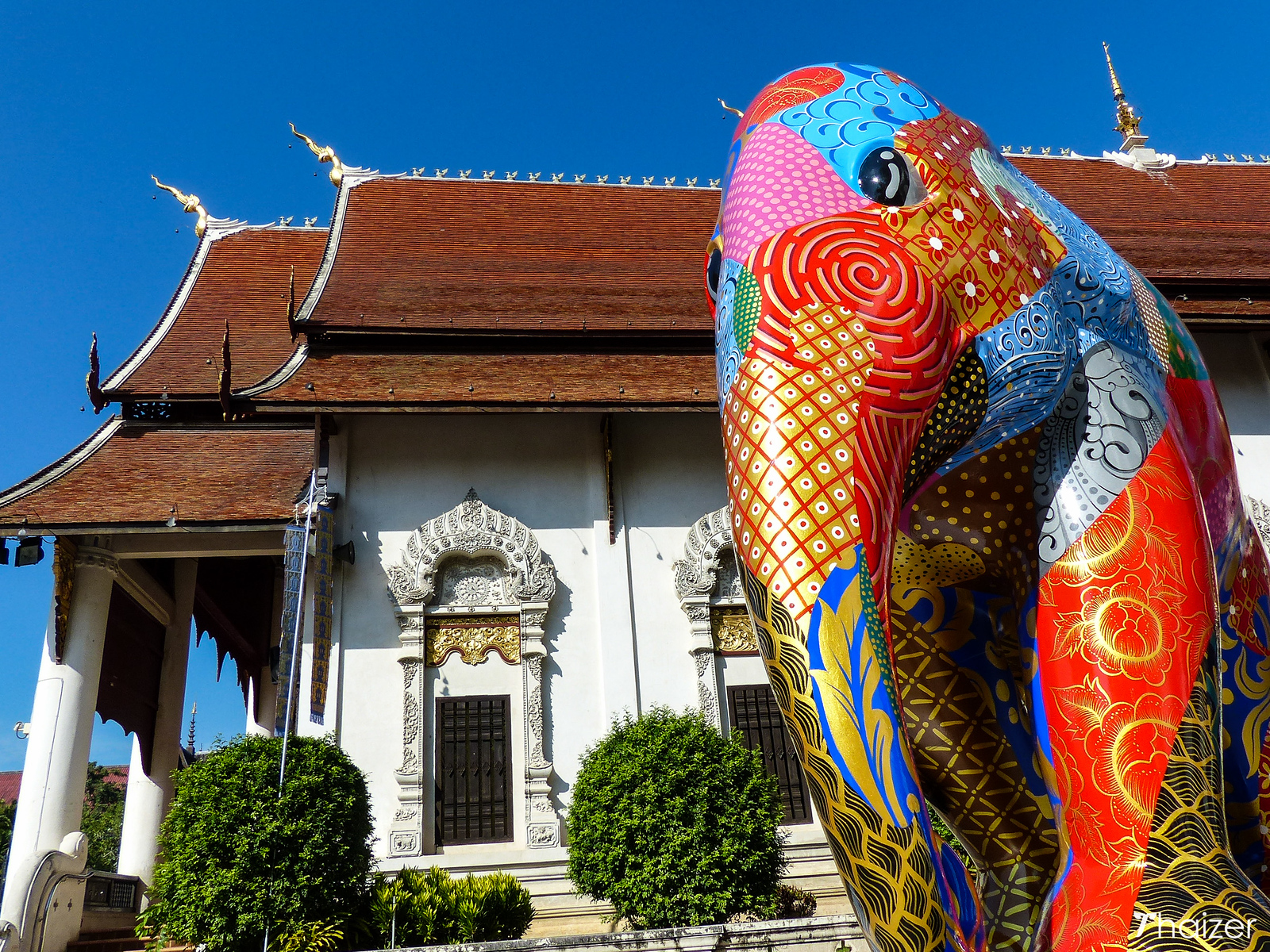 Since 2006, Elephant Parade has hosted exhibitions in cities around the world including Amsterdam, Copenhagen, London, Milan and Singapore. Last year, the Elephant Parade was hosted in Bangkok. The event creates publicity and awareness for elephant conservation with a special focus on the Asian elephant. After each exhibition finishes the elephant statues are auctioned off with proceeds helping to fund conservation efforts for the Asian elephant. 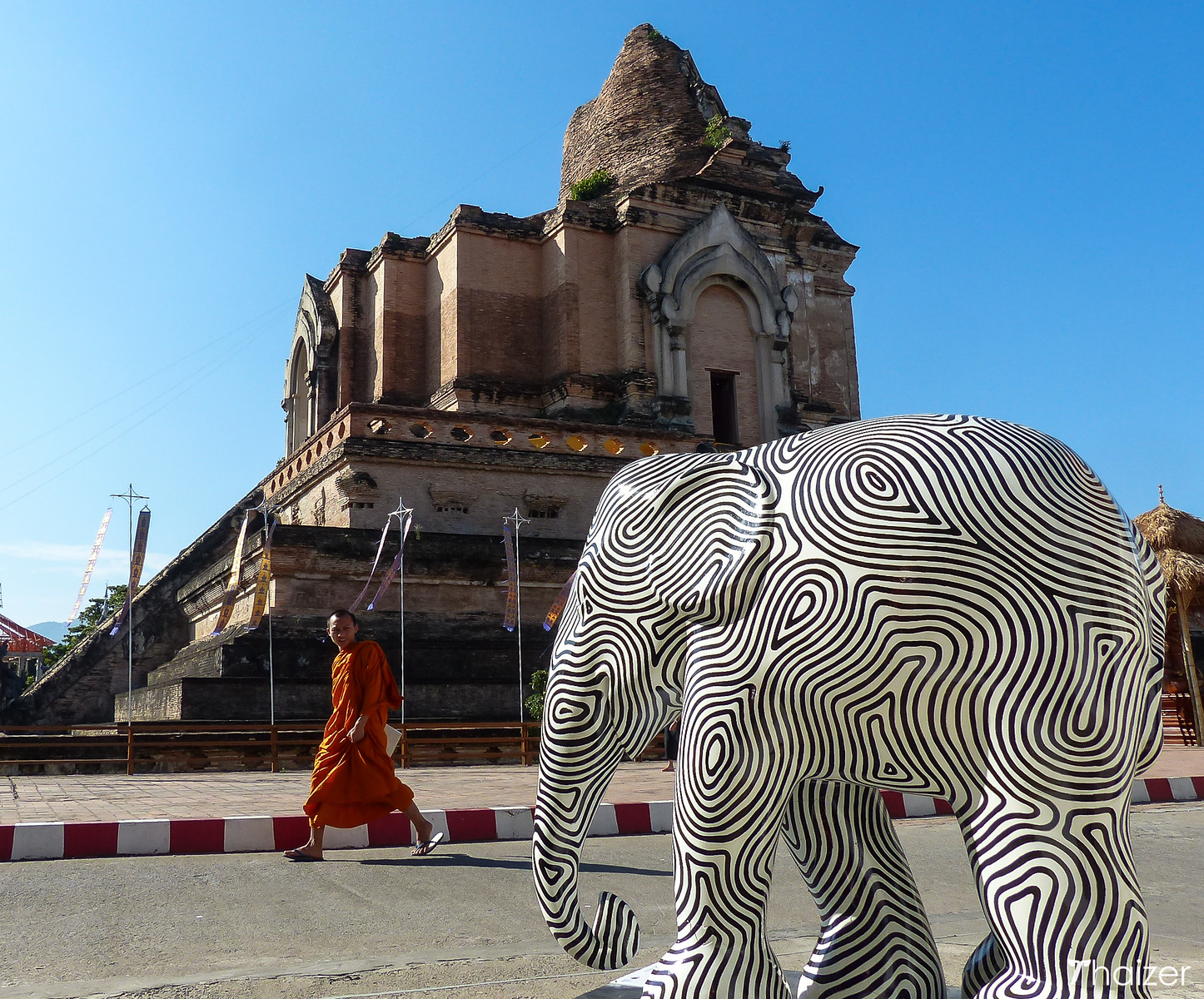 Black ribbons for the King
In honour of the late King of Thailand, each elephant at the Chiang Mai event is sporting a black ribbon on their front leg. 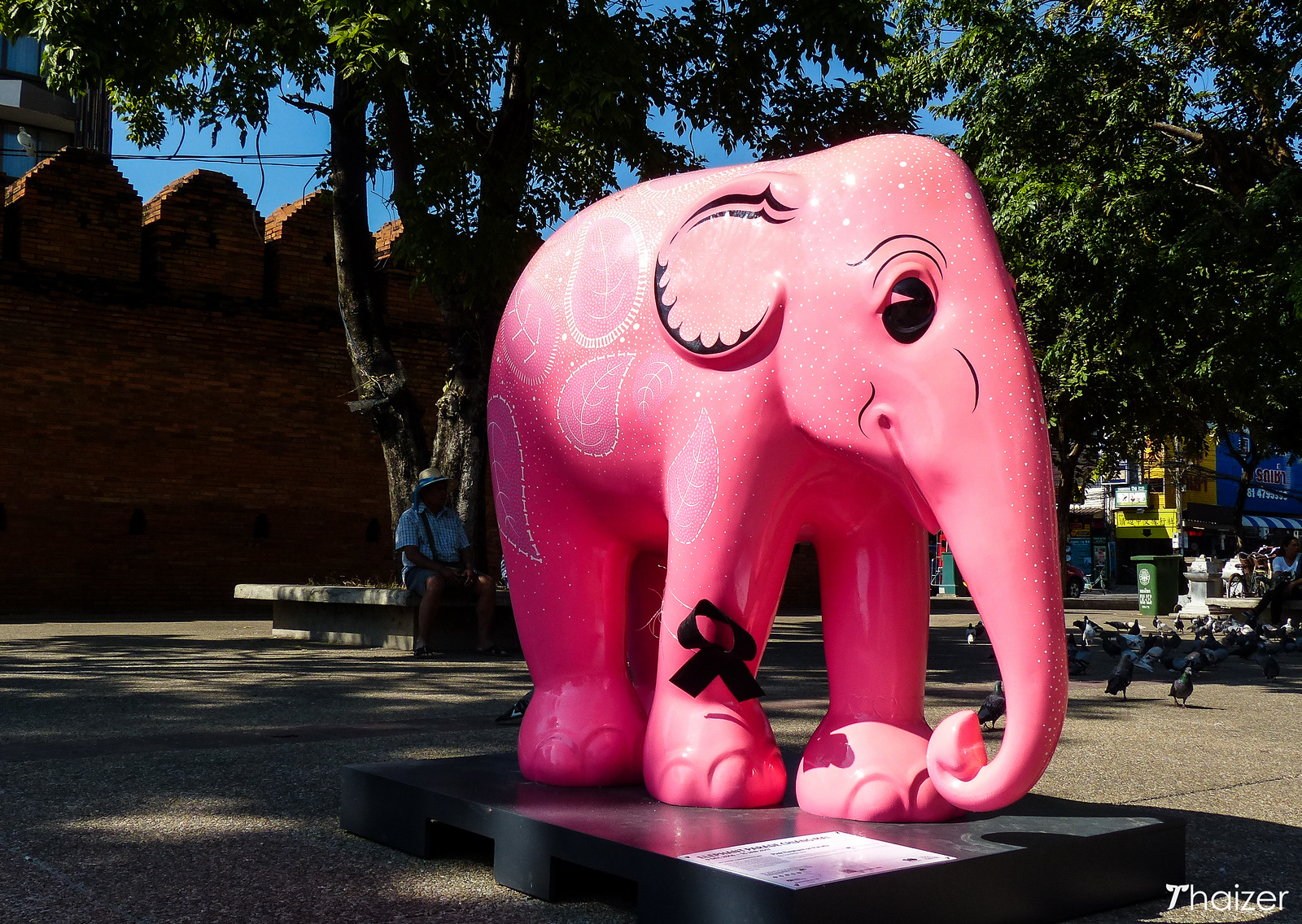 at Thapae Gate (above) and Ginger and Kafe (below) 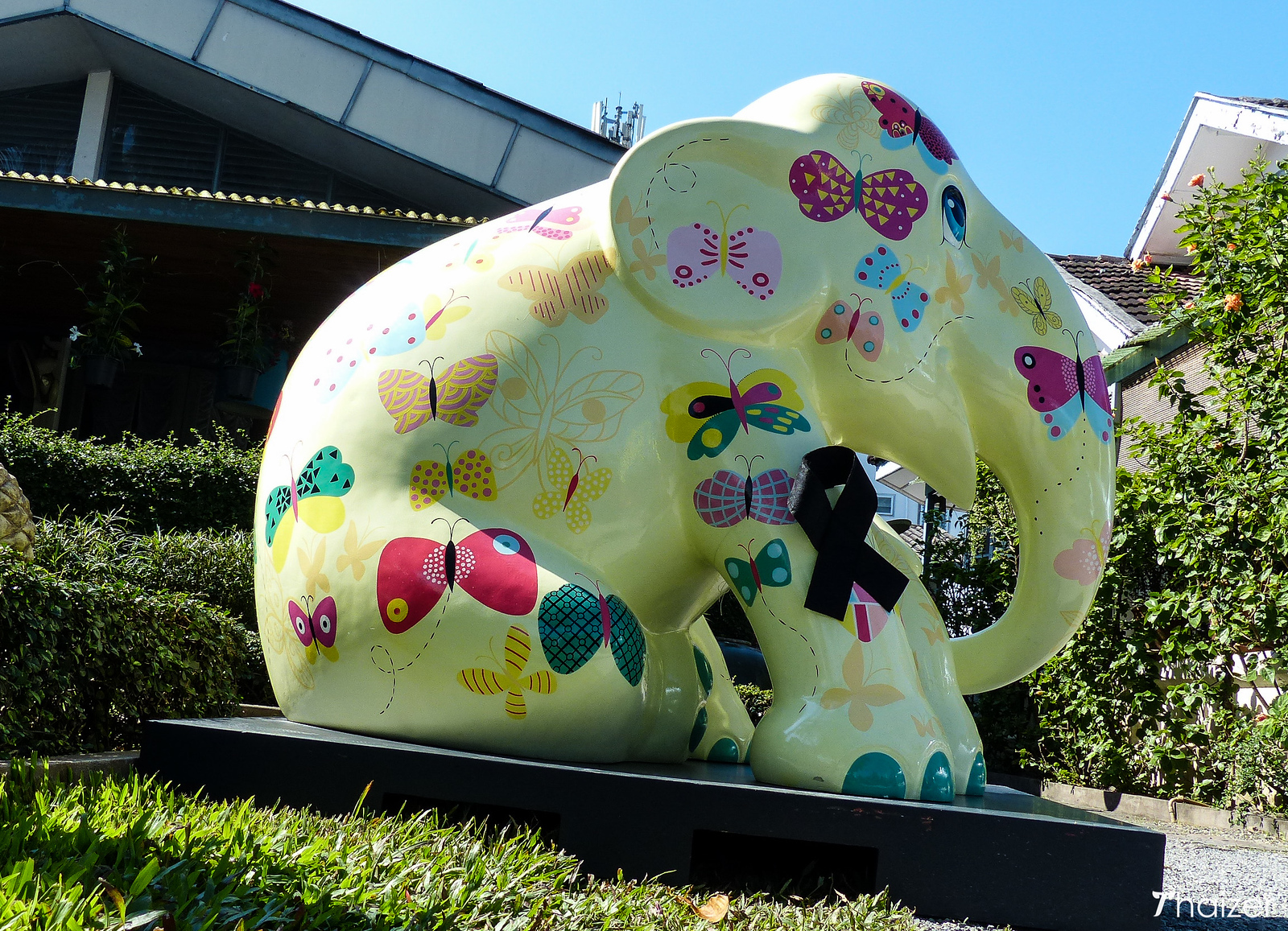 Mosha the elephant with the prosthetic leg

The inspiration behind Elephant Parade is an elephant called Mosha who lost her right leg some years ago after stepping on a landmine near the Thai-Cambodian border. Mosha was subsequently treated at the Friends of the Asian Elephant Hospital in Lampang where, in 2007, the then 3-year old Mosha became the first elephant in the world to be fitted with an artificial leg. Each year, Mosha has a new prosthetic leg fitted and she has become the mascot of the Elephant Parade with a statue of her appearing at every exhibition around the world. In Chiang Mai, you can see Mosha’s statue at Thapae Gate. 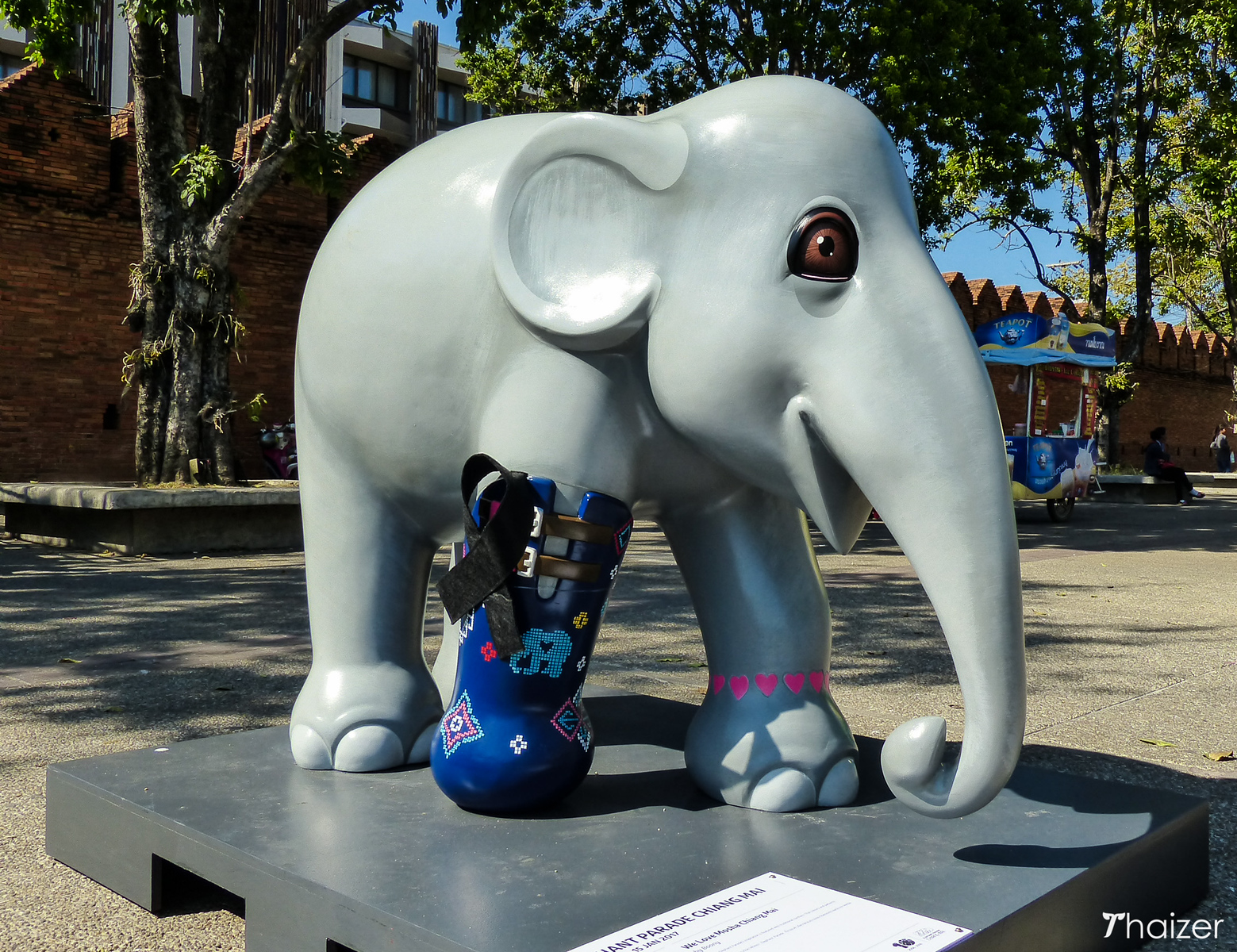 Mosha the elephant with the prosthetic leg at Thapae Gate, Chiang Mai 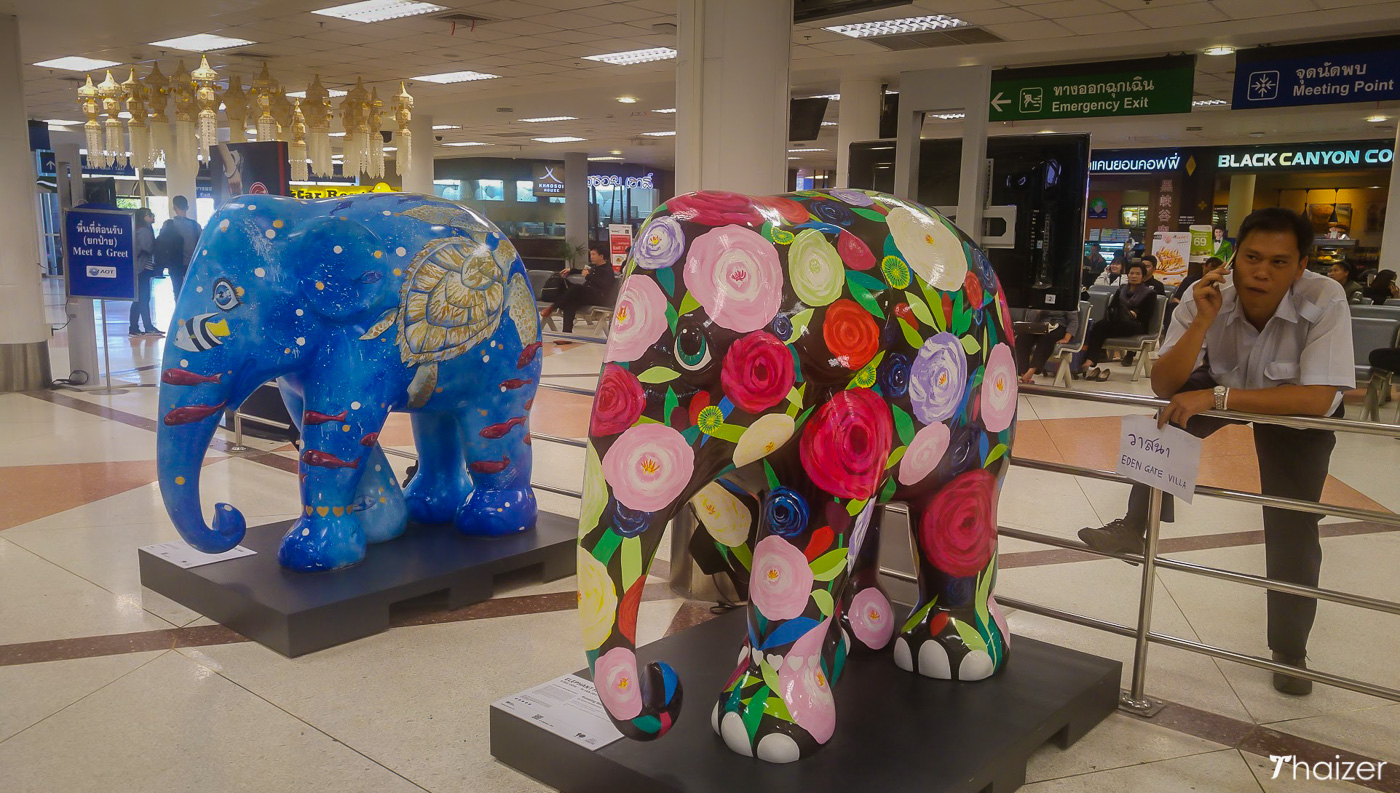 If you’re arriving by plane in Chiang Mai, you’ll be welcomed by the colourful elephants waiting in the domestic and international arrivals hall. You’ll also find statues at prominent locations around the city including Thapae Gate, opposite the Three Kings Monument and at Wat Chedi Luang. The main herd can be seen at Maya Lifestyle Shopping Centre. Locations of the elephant statues in Chiang Mai (number of elephants shown in brackets):

What is the Best Island in Thailand?
Next Post: Visiting Thailand in January