Colours of Thailand: Radiant in Red

They might be small, but the humble chilli can pack a powerful punch. And as any visitor to Thailand will testify, the Thais love to use them in their cooking. Take a trip to any fresh food market in Thailand and you’ll see piles of colourful chillies on display like these beauties at Pak Klong Talad Market in Bangkok. 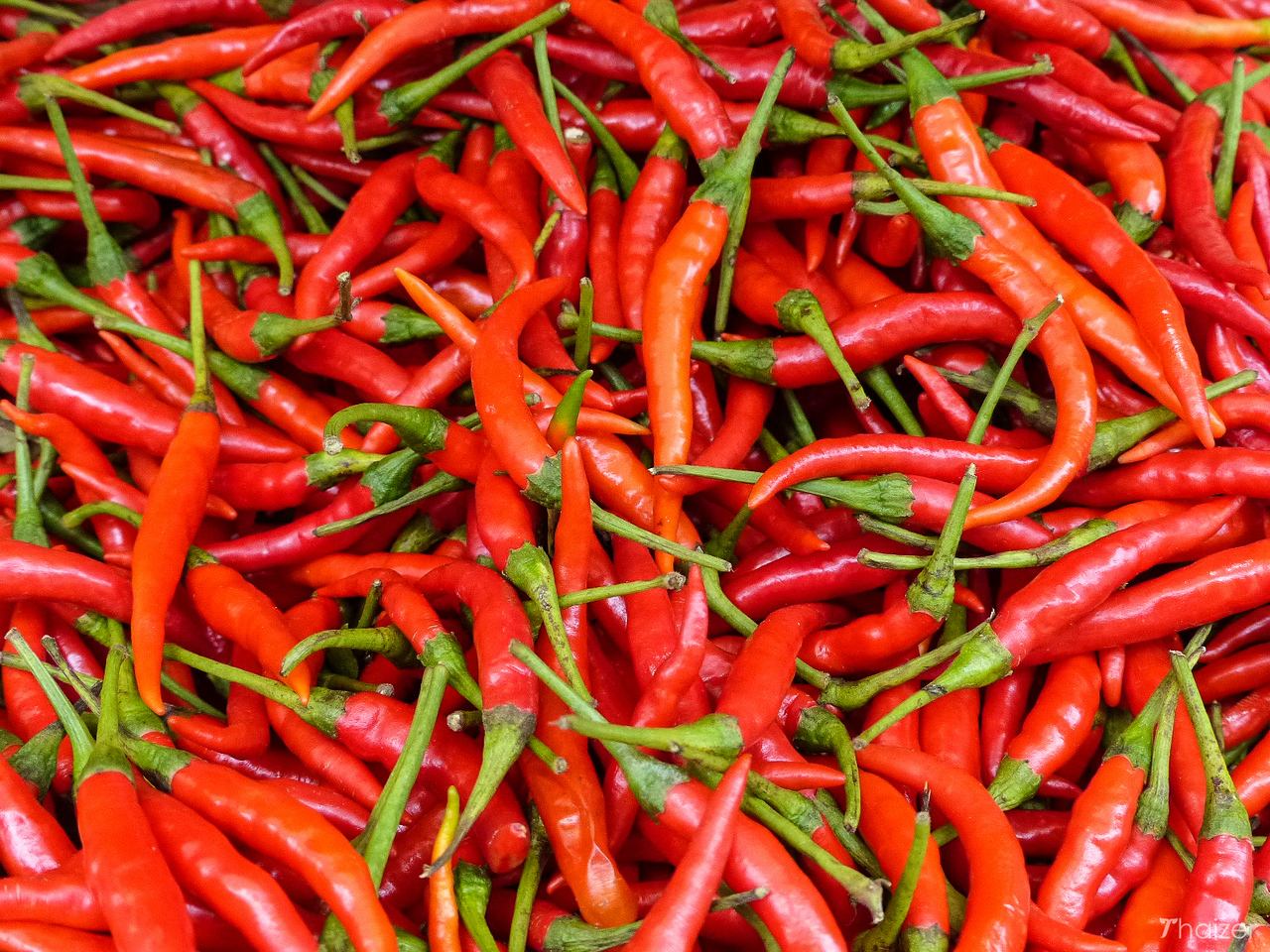 Red, white and blue are the colours of the Thai flag. The red represents the nation and symbolises the blood that was spilled to keep Thailand free and independent. Many Thais are proudly patriotic with Thai flags displayed outside many homes and businesses in Thailand. This photo of two Thai cyclists was taken at the annual Bangkok Car Free Day. 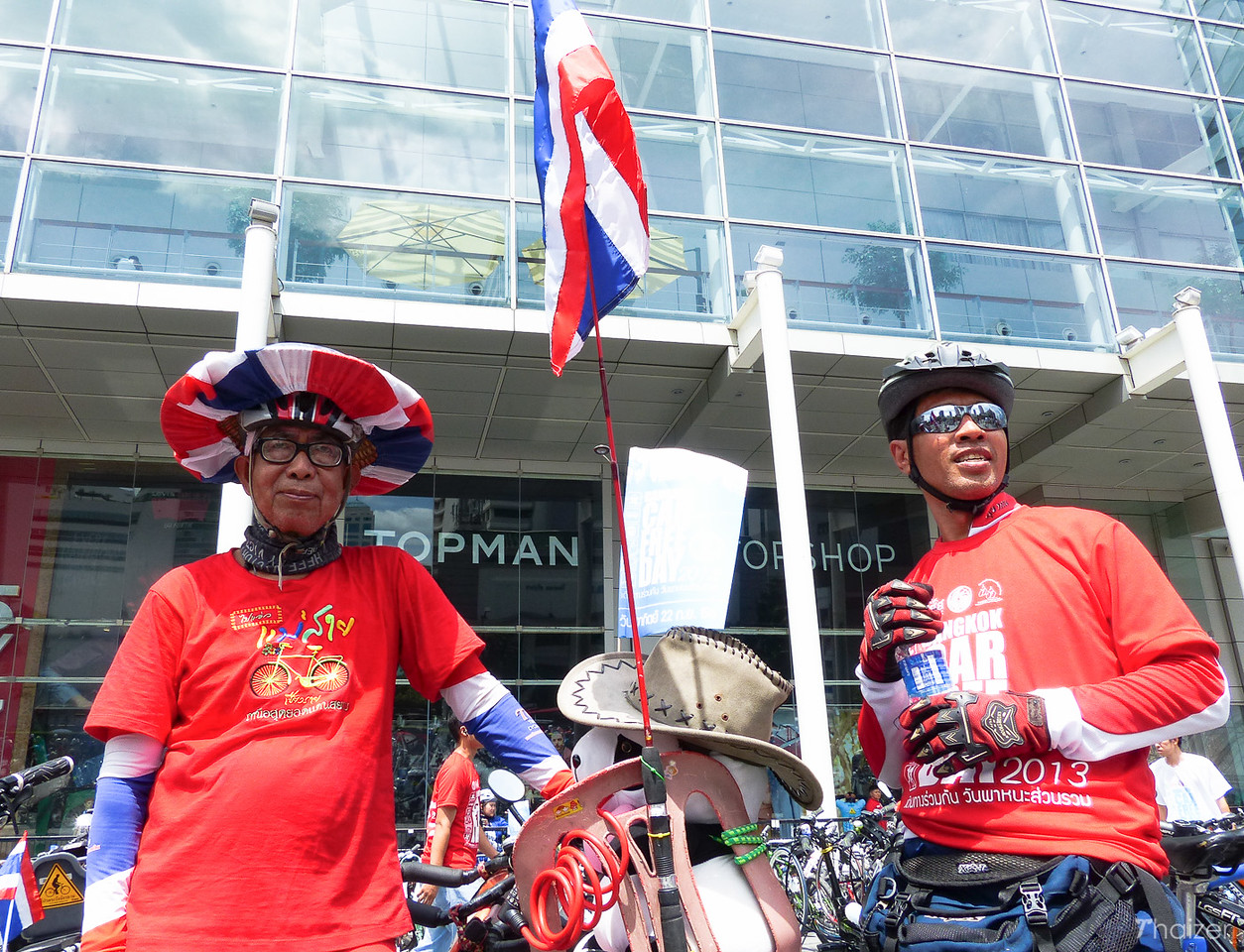 Yi Peng is a tradition of the former Lanna kingdom, an area that now forms part of northern Thailand. The Yi Peng Lantern Festival is held annually in Chiang Mai with colourful lanterns displayed around the city.

These young ladies are preparing to take part in a parade for the kathina robes ceremony at Mae Jo, just outside Chiang Mai city centre. The robes ceremony and merit-making activities take place during the day ahead of a mass sky lantern release in the evening. The sky lantern release at Mae Jo is spectacular, but it only forms a small part of the day which is something many tourists don’t seem to realise. For most local people who attend the Mae Jo event, the main focus is on making merit.

Longtail boats known as ‘reua hang yao‘ are one of the iconic images of southern Thailand. And if you’re in the right place at the right time, you can capture the boats against the backdrop of a stunning Andaman sunset. I took this photo on Ao Nang Beach, Krabi.

Rambutans look strange, but taste delicious. At around 30 Baht per kilo, they’re great value too.

From Bangkok to Chiang Mai, Phuket Town to Hat Yai, many towns and cities in Thailand have either a Chinatown district or specific streets where Chinese heritage is celebrated. With red being a lucky colour in China, these streets often feature red lanterns and red-coloured shop-fronts. 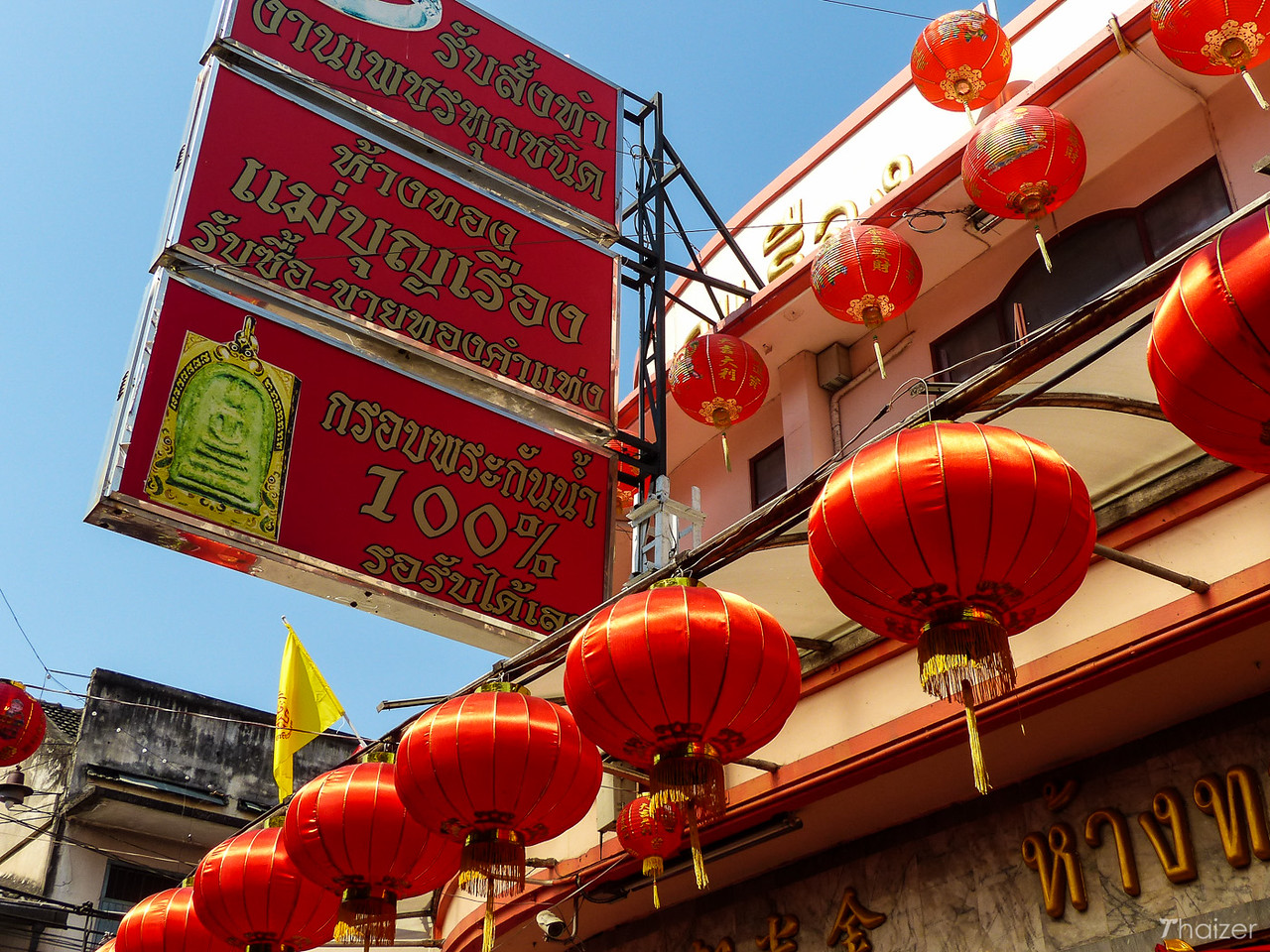 Red roses at the shrine to love

Visitors lay red roses at the Trimurti Shrine in Bangkok. Originally associated with success and happiness, the shrine now attracts those looking to be lucky in love.

Dressed in red, the young musicians in the photo above perform at a traditional music concert held during Songkran, the Thai New Year Water Festival. The elegant mature ladies with red sashes perform the classic Thai fingernail dance during a religious parade in Phrae. 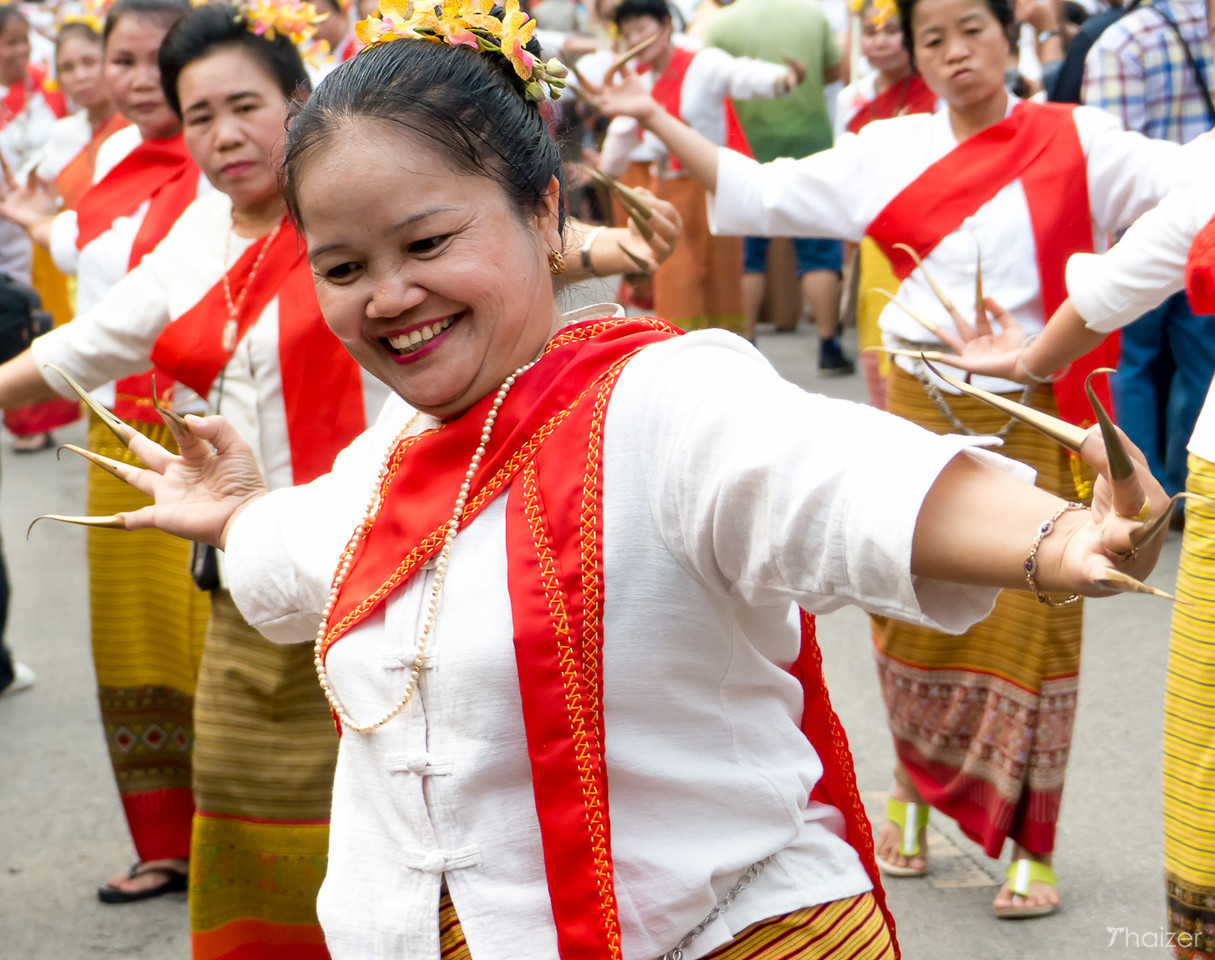 Depending on where you are in Thailand, songthaews and tuk-tuks can vary in colour almost as much as they can vary in price. Whether they’re red, blue, green or covered in Hello Kitty stickers, these open-sided vehicles can be a convenient way to get around town. But you might have to wake up the driver first if they’re having a snooze in the back seat!

Thailand’s national sport is Muay Thai (Thai boxing) and it’s a sport which has a long history and a rich tradition which Thais are justifiably proud of. Even if you don’t attend a Muay Thai bout in person during your visit to Thailand, you’ll probably notice Thai boxing somewhere. Whether it’s Muay Thai shorts for sale at a night market or posters advertising forthcoming fights, Muay Thai is part of the fabric of Thailand. And this is Thailand, so expect the unexpected. I spotted this mini Muay Thai fighter forming part of a flower display at a temple garden. 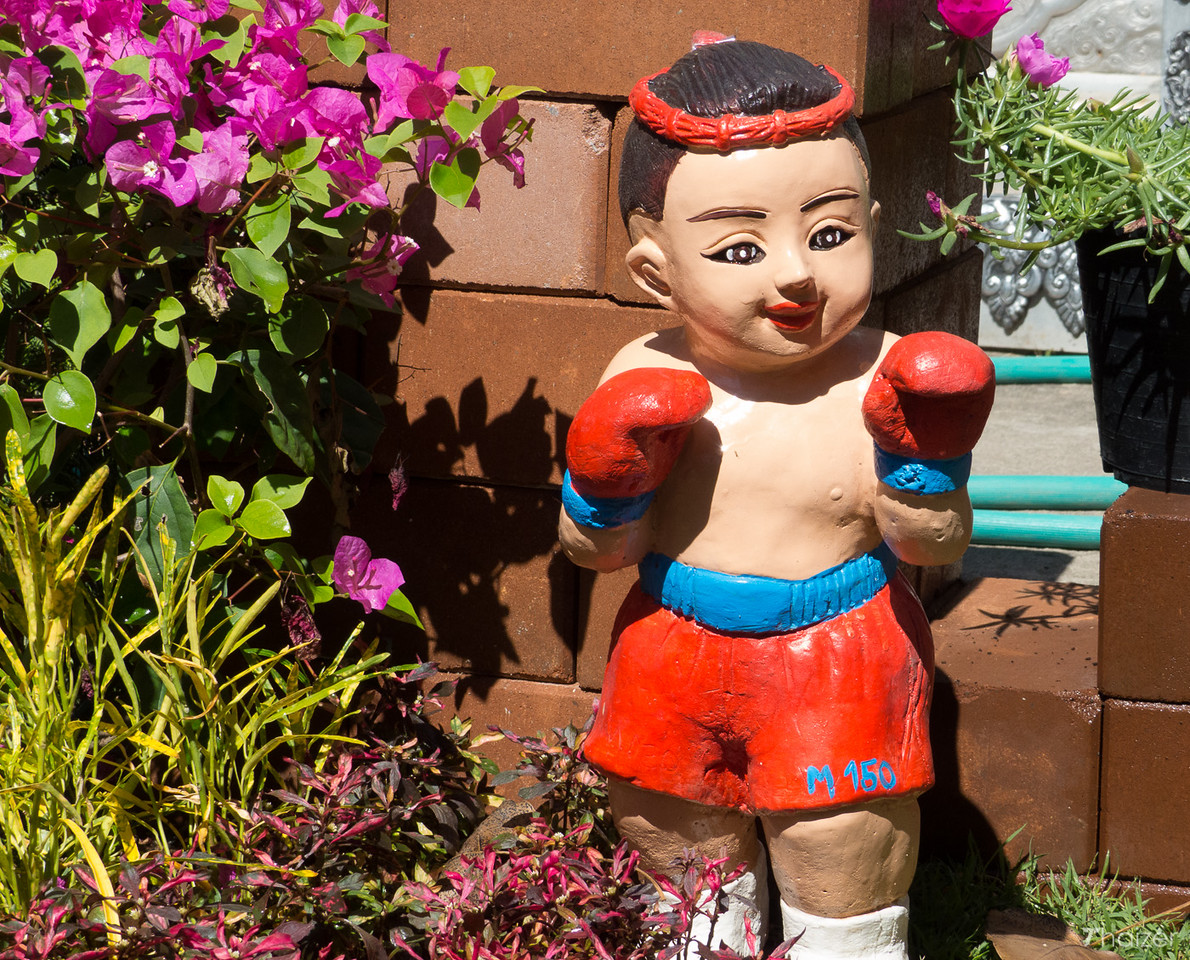 The mountains and cooler climate of northern Thailand help to sustain a range of colourful blooms. The photo above is from the delightful Royal Flora Ratchaphruek gardens in Chiang Mai. The photo below was snapped at the equally beautiful Mae Fah Luang Garden at Doi Tung, Chiang Rai.

Although Christmas isn’t recognised as a public holiday in Thailand, it is an event which doesn’t go unnoticed. If you visit Thailand in December, you’ll see that some shopping malls erect Christmas trees and decorations. Elsewhere, Christmas hats and holly can appear in some unlikely places.