Mae Nang Kwak – The Little Lady Who is Good for Business

If you look closely enough at most shops, food-stalls and businesses in Thailand you are likely to see a small figurine of a lady sat in the polite Thai style of ‘pub-peap’ with legs tucked behind her. But this is no ordinary lady or ornament; this is Mae Nang Kwak. Normally located near the till or in a raised position on a shelf near the entrance to a store, nang kwak is a talisman gently encouraging customers to come in with her right arm raised and fingers bent in a polite beckoning motion. With a crown on her head she is often depicted in red clothing but other colours including green may also be used. Very often she will be shown with a small gold purse or money bag resting in her left hand or on her lap. The word ‘nang’ in Thai means sit whilst ‘kwak’ means beckon or summon. The addition of ‘mae’ (mother) is sometimes included as an added mark of respect. This little good luck mascot may also be called ‘nong kwak’ with ‘nong’ meaning young lady or Miss. 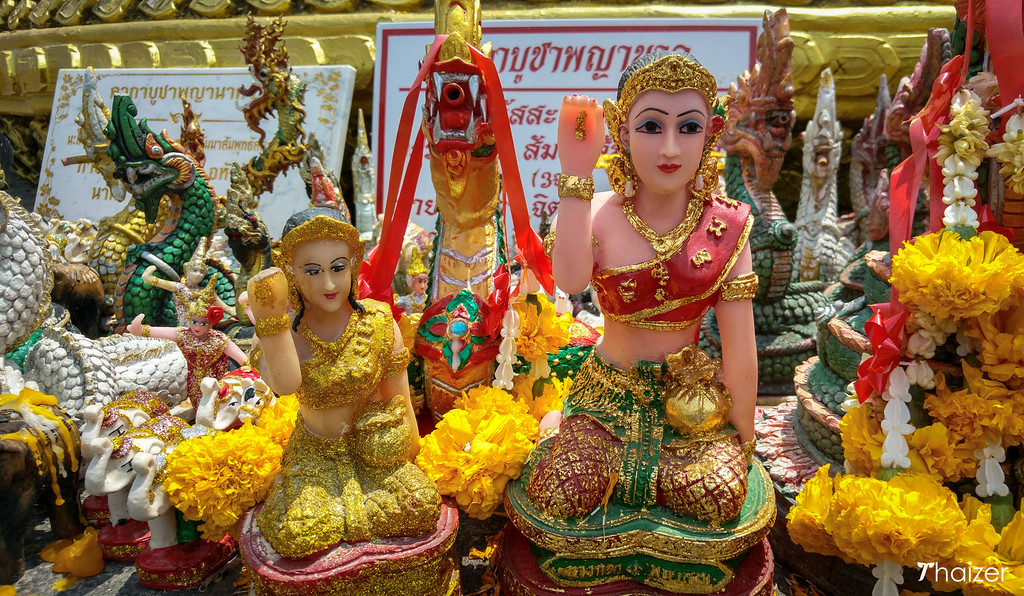 But simply having a figure of nang kwak isn’t sufficient to guarantee custom or prosperity. Before being able to work her charms, nang kwak needs to be properly blessed by a Buddhist monk. Then the lady needs to be shown proper respect on a daily basis by the owner who, each morning before opening, will place food, drink and incense as offerings and will also chant a mantra to her. Mae nang kwak’s favourite drink is said to be nam daeng, a sweet, syrupy red drink. If you are in Thailand and see a shrine or a seemingly random bottle of red Fanta with a straw in it, look out too for nang kwak who usually isn’t very far away. For such a diminutive lady, nang kwak is high maintenance and to some extent the user-friendly maneki-neko cat has replaced her amongst a new generation of Thai business owners who still want to use a good luck charm for their business, but don’t want the daily upkeep of nang kwak. In some hi-so boutiques and stores with a younger clientÃ¨le, nang kwak may be deemed to be too old-fashioned and the trendier white maneki-neko cat will replace her. But in neighbourhood shops and at roadside stalls and restaurants, nang kwak is more likely to hold sway over her feline counterpart. 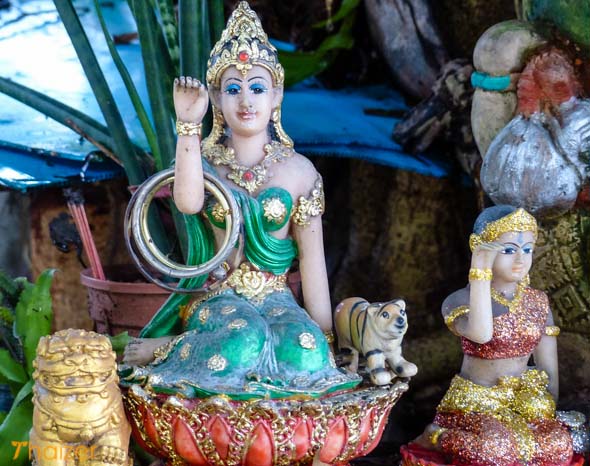 The good news for the many mobile traders in Thailand who push barrows and carts with their merchandise, is that they don’t have to miss out on the good luck bestowed by nang kwak. They might not have a shop or suitable shelf to display the little lady, but they can still take nang kwak with them in the form of an amulet which is worn around the neck or carried in their money-belt. It is also common to see nang kwak in private homes and she can also be spotted in many spirit houses as a general form of good luck amongst the other figurines to be found there. 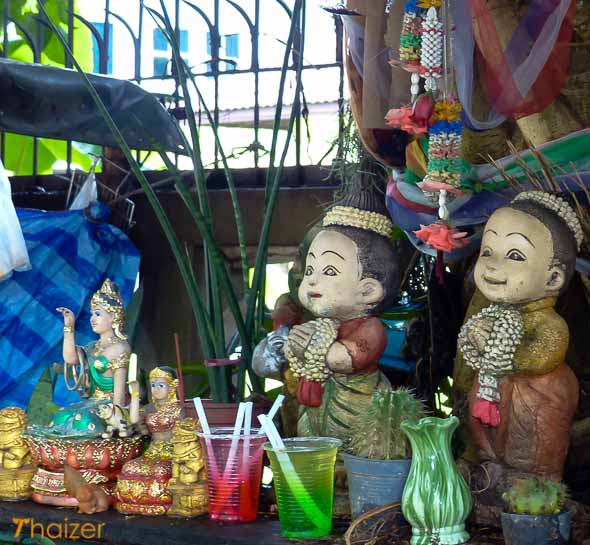 The Origins of Nang Kwak

The exact origins of nang kwak are unclear. There are tales from Thai folklore that pre-date Buddhism where people paid homage to the rice goddess (Mae Po Sop) who was a figure with many similarities to nang kwak. As Buddhism spread from India into Thailand, stories and folklore from India and Hinduism also became entwined with the local culture. One such legend tells of an Indian merchant’s daughter called Supawadee who brought about good luck for her father’s business as they travelled from town to town. Word soon spread and other business owners came to see her to seek her blessing. As Indian merchants arrived in Thailand they brought figurines of Supawadee as good luck charms with them and when the local merchants saw how successful the Indians were they may have adopted the lucky Supawadee charms too. So it’s possible that nang kwak emerged as a combination of the rice goddess (Mae Po Sop) and Supawadee.

Nobody seems to know exactly when the figure of nang kwak was given the beckoning hand, but it is probably a relatively recent addition inspired by the lucky maneki-neko cat from Japan which has found popularity in Thailand over the years. Despite the arrival of the Japanese interloper, nang kwak remains a favourite figure with many Thai business owners so look out for her when you visit any restaurant or shop in Thailand.