At first glance, Thailand’s national sport can appear brutal. Two fighters in a flurry of punches, flying feet and crashing elbows. But Thai boxing isn’t just about inflicting pain and knocking out opponents. Muay Thai is an ancient art where music, respect and culture all combine. And it’s the artistic and cultural side of Thai boxing that is wonderfully showcased in the spectacular stage-show, Muay Thai Live.

For Muay Thai aficionados, Thailand’s national sport doesn’t need any spicing up. But if you add a dose of drama, a splash of sanuk and an abundance of action, you’ve got all the ingredients you need for a unique evening of entertainment. Created by acclaimed director Ekachai Uekrongtham, Muay Thai Live recounts the origins and rise of Thai boxing.

The story of Muay Thai

Cleverly choreographed and energetically performed, the audience is taken on a journey through time from old Siam to modern Bangkok. In the ancient Ayutthaya of the 1700s you are introduced to the legendary fighter, Nai Khanom Tom, a man still respected by every Muay Thai boxer today. The show moves on at speed in a whir of acrobatic moves and rapid costume changes played out to a soundtrack of traditional music. For the dramatic final act of the show, the performers are given a contemporary setting to bring the Muay Thai story up to date. It’s an ambitious show to produce, but it works well and is skilfully performed by the cast members with just the right mix of drama and Thai-style humour.

At the end of the stage-show, a boxing ring is erected on the stage and a couple of Muay Thai bouts are put on. On the night I was there, I was pleasantly surprised by the quality of the boxing which featured some talented youngsters from various gyms in and around Bangkok.

The Stage at Asiatique is a purpose-built auditorium with the twin-stage layout and semi-circular seat arrangement designed to bring the action as close as possible to the audience. The seating is comfortable and with air-conditioning, good acoustics and a well-stocked bar, it’s a pleasant venue to watch the show. The auditorium can sit 600 people, but when I visited there were only around 100 people in attendance. 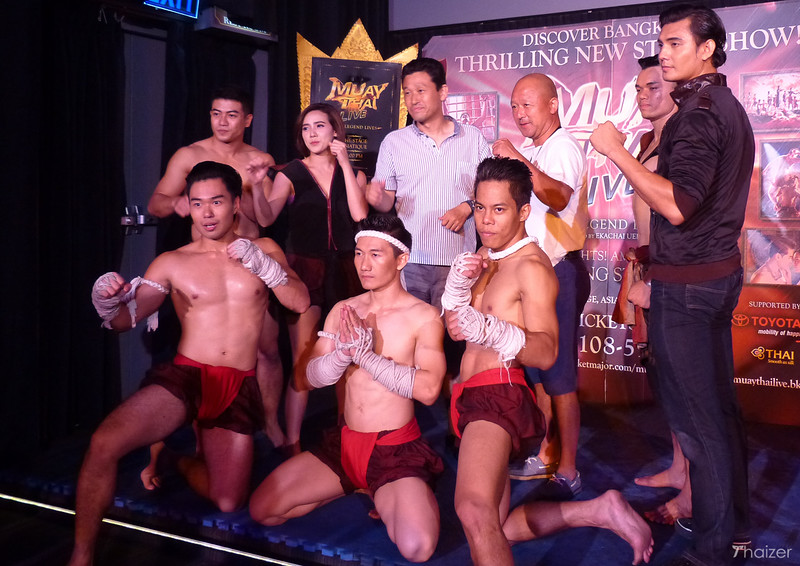 No photography is permitted during the show, but the cast will pose for photos with the audience afterwards. You may also take photos during the Muay Thai fights that follow the stage-show.

The size of the auditorium and frequency of shows means that you shouldn’t have any problems turning up on the night and paying on the door, but tickets can also be pre-booked if you want to be sure. Food and drink is available at the auditorium and there are also plenty of options at Asiatique.

How to get to Muay Thai Live

Asiatique covers a large area, but the different zones and warehouses are all well sign-posted. Muay Thai Live is hosted at The Stage at Warehouse 4.

I received a complimentary ticket from the promoters, but as always views and opinions are my own.