I would guess that not many foreign visitors are aware of this understated memorial in Bangkok. And that’s sad. Not because it is a must-see attraction or a stunningly beautiful piece of architecture because it is neither of those things. It is sad because the memorial commemorates a period of Thai history that should never be forgotten. 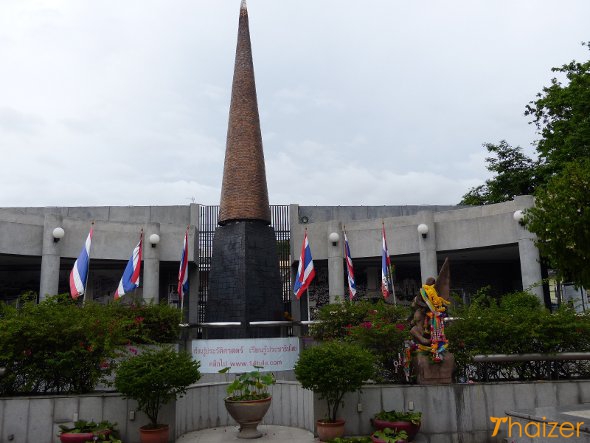 The memorial is dedicated to the young men and women who lost their lives – the official death toll was 77 – when government troops opened fire on student protesters in Bangkok on October 14, 1973. Behind the memorial is a display (in Thai language only) explaining the lead up to the tragic events that would become known as the October 14 Uprising. Even if you can’t read Thai, the photographs provide some poignant imagery. Photos from that day show tanks on the streets of Bangkok and images of some of the students who led the protests against the military government. A poster at the entrance to the memorial shows the moment when the coffin of one of the students who had been killed by the army was hoisted on top of the central mound of the Democracy Monument by fellow protesters. The October 14 Memorial also commemorates civilian deaths during the Bangkok street protests of October 1976 and May 1992. 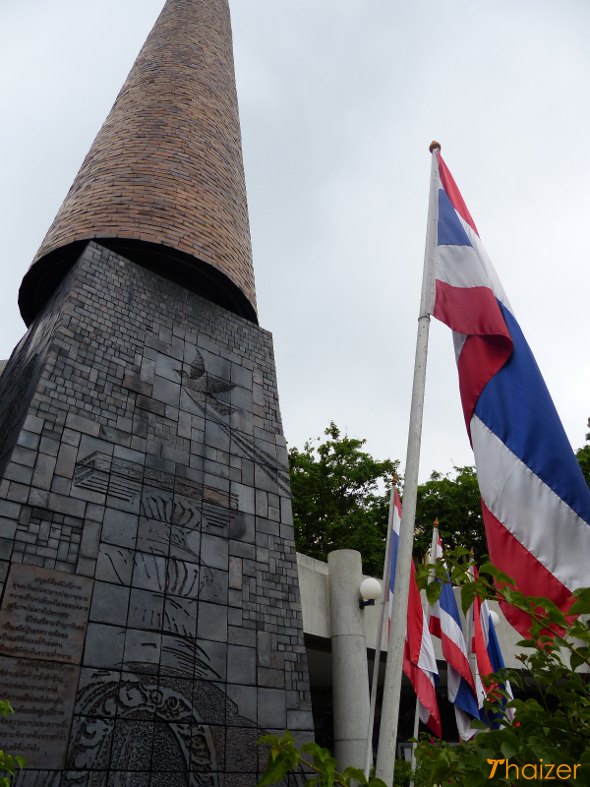 What were the protests about?

Since 1947, Thailand had been ruled by a succession of military governments. Field Marshal Thanom abolished the constitution when he took power via a coup in 1971. There was already growing unrest with Thanom and his regime by the time some students were expelled from Bangkok’s Thammasat University for anti-government activities in June 1973. In early October 1973, 13 pro-democracy campaigners from Thammasat were arrested after calling for a permanent constitution. Students from Thammasat took to the streets of Bangkok to protest against the arrests and demand that the military government stood down. The students were soon joined by others from all walks of life who were unhappy with the military regime. On October 13, a peaceful protest in the Thai capital was attended by a figure estimated to be somewhere between 200,000 to 500,000 people and the military government agreed to meet the protesters demands. However, such was the distrust of the regime many protesters did not believe the concessions would be honoured. Student leaders turned to His Majesty the King for advice and were told that they should take the concessions and disperse and so an agreement was signed between protest leaders and the government.

By the early morning of October 14, word had got round to the protest sites about the agreement and crowds were beginning to disperse when a fight broke out between police and some of the protesters. Thai police said they thought the retreating crowds were moving towards the royal residence at Chitralada Palace and used tear gas and batons to stop them. Some of the students jumped into canals for safety whilst others sought refuge at Chitralada Palace where the Thai monarch ordered the gates to be opened and around 2,000 demonstrators were allowed to take shelter in the palace grounds. As the situation became increasingly tense on October 14, accounts of protesters being killed started to spread and some of the crowds barricaded roads with burnt-out vehicles and threw rocks and petrol bombs at the police and troops. Independent reports would later conclude that some factions of the Thai security forces used live rounds on unarmed civilians. The official death toll was 77 with more than 800 injured. As a consequence of the killings, the three army generals who would go down in Thai history as the ‘Three Tyrants’ were forced to resign and leave Thailand. 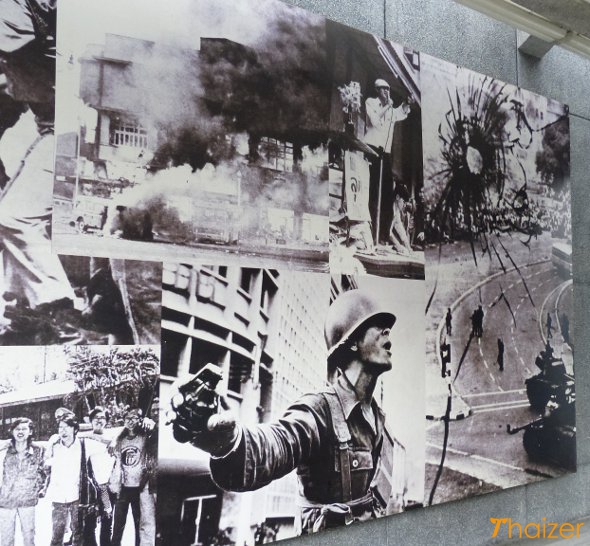 The aftermath of the protests

Dr Sanya Thammasak, the rector of Thammasat University and a former chief justice of Thailand’s Supreme Court, was appointed the new interim prime minister to lead Thailand during its transition from a military government to democracy. The situation remained calm until one of the ‘Three Tyrants’, Field Marshal Thanom, returned to Thailand in October 1976. His return from exile sparked more protests, bloodshed and another military takeover of power.

A ceremony is held annually at the memorial on October 14, a day which is remembered as ‘Freedom Day’. The ceremony is attended by relatives of the victims, government officials and religious leaders. Another memorial to the events of October 1973 is located within the grounds of Thammasat University.

The October 14 memorial is a short walk to the west of the Democracy Monument and is located by the junction where Ratchadamnoen Klang meets Thanao. There do not appear to be any fixed opening and closing times and although it’s a public memorial the monument and photographic display behind it is sometimes roped off.

Previous Post:Don’t Stand on the Threshold
Next Post:Thai-Style Salads