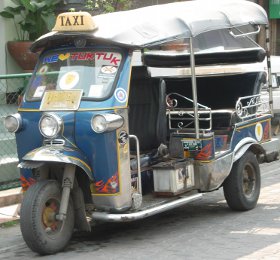 Tuk-tuks get their name from the sound of their noisy two-stroke engines. These open-sided three-wheel vehicles operate as private taxis and normally carry a maximum of three passengers. Tuk-tuks aren’t found everywhere in Thailand, but are common in places like Bangkok and Chiang Mai. There are no set fares and the passenger is obliged to negotiate a rate with the driver. It isn’t as difficult as it sounds as most drivers speak enough English when it comes to financial matters. Getting to your destination isn’t always as straight forward even if you can pinpoint on a map exactly where you want to go. Nevertheless, the whole experience can be very entertaining. Probably not for the faint-hearted as the drivers can take some unusual short-cuts, but it is all part of the distinctly Thai travel experience.

A note of caution here; some Bangkok tuk-tuk drivers work a scam. An old favourite is to inform passengers that the Grand Palace is closed, but they will offer to take you on a ridiculously cheap tour of the city. This they will do, but it will involve numerous stops at jewellers and tailors’ shops where you will be encouraged to spend your money. The driver receives a kickback for every customer he gets through the shop door. Inside the store, the hard sell begins. If you buy something then the driver and shopkeeper will be happy, but if you don’t the tuk-tuk driver may rapidly lose interest in your custom and abruptly end your Bangkok tour by dropping you off in an unfamiliar part of town where you end up having to take a metered taxi. Another old scam is if you are outside a tourist location (the Grand Palace is again the favourite for this one). A smartly dressed Thai man will engage you in conversation. He will politely make small talk about your home country and Thailand. Very often they will say that they work in a local government office and tell you about all the best places to visit in Bangkok. As he is circling areas of interest on your map he may casually mention a clothing store that is having a closing down sale. A government endorsed clothing store, no less. A clothing store where the man bought his own clothes, in fact. The best and cheapest way to get to all these places is by tuk-tuk. A tuk-tuk happens to be parked on the street close by. It must be your lucky day. What a nice man; a smiling, charming and helpful person who wishes you a pleasant stay in Thailand as you get in the back of the tuk-tuk. Welcome to Bangkok; you’ve been scammed and are on your way to an assortment of tailors/jewellers shops. Even people that are aware of these scams can fall for them.

I don’t want to put people off using tuk-tuks in Bangkok, because very often they are the quickest way of getting from point A to point B and the drivers can be courteous and helpful. Just be aware that like most big cities all over the world, tourists can get ripped off. Bangkok is no different.