The day after Asahna Bucha is another important day in the Buddhist calendar. The day is called Wan Khao Phansa and marks the beginning of the three-month long period known as Phansa which is the Buddhist retreat period and is sometimes referred to as ‘Buddhist Lent’. The Phansa rains retreat marks a period in the rainy season when monks would traditionally confine themselves to the temple and its immediate surrounds. Even before the time of Buddha, the holy men that roamed the land would avoid unnecessary travel during the growing season so that they did not damage crops. In Thailand, this tradition was maintained with the advent of Buddhism. Nowadays, monks will still be seen in the daytime, but during the Phansa period they will sleep at the same temple rather than travel from place to place. 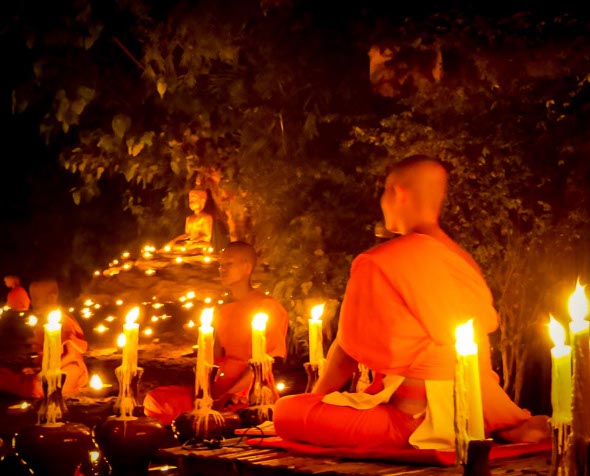 Wan Khao Phansa and the retreat period is a popular time for Thai boys and men to become ordained as monks. For most of those being ordained, joining the monkhood is just a temporary measure which fulfils the expectations of family and achieves merit for all concerned. The beginning of the retreat period is also a time when Thai Buddhists will make donations to the local wat and may demonstrate renewed commitment to Buddhism. A common way of doing this is to try and abstain from meat, alcohol or tobacco for three months. The retreat period ends in October with Awk Phansa.

Takraw: Thai Kick Volleyball
Next Post:Take Off Your Shoes