The picturesque temple of Wat Suan Dok is located just off Suthep Road in the western part of Chiang Mai city. If you are spending time in Chiang Mai it is worth a visit just to see the unique whitewashed reliquaries or shrines which contain the ashes of the former royal families of Chiang Mai. 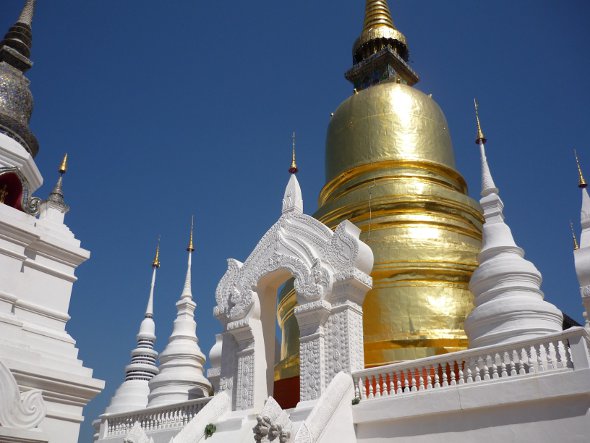 According to legend, when Sri Lankan Buddhists arrived in the area in 1369 they brought with them a miraculous glowing relic from the Lord Buddha. When King Ku Na of Lanna saw the relic he ordered the construction of a chedi to house it. The official name of Wat Buppharam Dok Mai would later become known as Wat Suan Dok (Flower Garden Temple) because the chedi and temple were built in a garden belonging to King Ku Na. Construction was completed in 1371, but as the pea-sized relic was being placed into the chedi the relic split into two parts. One half remains here at Wat Suan Dok whilst the other half was to become part of more legends en route to the mountain temple of Wat Phra That Doi Suthep. The Burmese captured Chiang Mai in 1558 and the temple at Wat Suan Dok gradually fell into disrepair. Two hundred years would pass before the Burmese were repelled and under King Kawilla (1782-1813) the temple was restored. 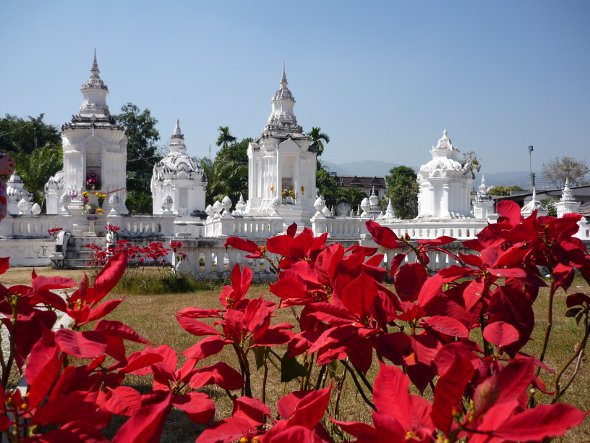 In 1907, the stupas containing the ashes of the princes and royal families of Chiang Mai were moved to Wat Suan Dok. These whitewashed reliquaries are located in a separate area adjoining the golden chedi and make for a photogenic image with the mountains and Doi Suthep as a backdrop. In the bot behind the main part of the temple look out for the 500-year-old bronze Buddha image. Wat Suan Dok is also the base for a Buddhist University and a meditation retreat. A number of tourists visit Wat Suan Dok specifically to take advantage of the Monk Chat (Monday, Wednesday and Friday 5-7pm) where visitors can speak to the monks in English as part of the popular Monk Chat programme to learn more about Buddhism and Thai culture.
Boutique hotels in Chiang Mai »