There are three main bus stations/terminals in Bangkok operating buses for all parts of Thailand. Although public transportation is available to all of these stations, it isn’t always the most convenient option for tourists travelling with large bags. If you are staying in Bangkok and need to get to the bus station you may find it just as easy to take a taxi directly there.

Bangkok’s largest bus terminal at Mo Chit serves destinations in the north and north-east of Thailand. This includes Isaan, Chiang Mai and Chiang Rai. The nearest Skytrain station is Mo Chit and there is also a metro station at Chatuchak Park.

Buses for the east coast, including Pattaya and Rayong, depart from Ekamai bus station which is conveniently located adjacent to the Ekamai Skytrain stop. There are also some buses which run from Mo Chit to Pattaya and the east coast, but most services run out of Ekamai.

Buses for southern Thailand, including Ko Samui, Phuket and Krabi, depart from the Southern Bus Terminal also known as Sai Tai Taling Chan which is located on the Thonburi side of the Chao Phraya River in Bangkok. This is also the terminal used by buses to and from Kanchanaburi. The Southern Bus Terminal moved to a new location in 2007 with more modern facilities, but remains awkward to get to by public transport if you aren’t familiar with the local bus system in Bangkok. The most convenient option for the majority of overseas visitors will be to get a taxi-meter to the terminal.

In addition to the three main bus terminals listed above, there is a smaller bus station at the Public Transportation Centre at Bangkok’s Suvarnabhumi airport. Buses run from here into most areas of Bangkok including the main bus terminals above. There are also some limited direct services to locations near to Bangkok including Pattaya. To get to the transportation centre, take the free shuttle bus from the main airport terminal building. 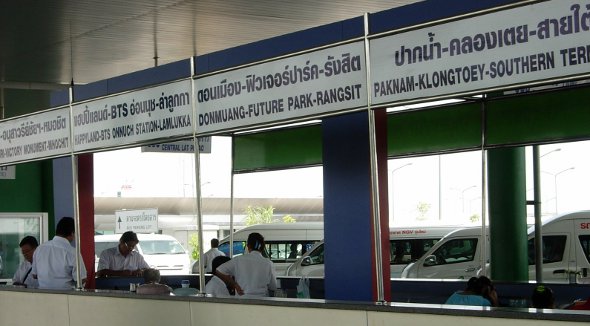 Buying tickets at any of Bangkok’s main bus stations is quite easy even if you don’t speak Thai. Destinations are marked on the ticket counters in English as well as Thai and the price is usually clearly displayed at the ticket booth too. There are also information desks at the terminals. When you buy your ticket, it will show the time of the bus departure, your seat number and, in most cases, will also include the bus number or bay number. In addition to the government run bus services, private bus operators run on some routes. If you are travelling long distances, you may wish to spend a few extra Baht on the added comforts provided by the first class or VIP bus services.

If you are travelling during a Thai public holiday it is a good idea to buy your ticket in advance and this is especially the case during the busiest travel period in Thailand, the Songkran holiday period.

Getting to the Bus Terminals

For the majority of overseas visitors to Bangkok, the most convenient way to get to the Northern and Southern Bus Terminals will be by taxi. The Eastern bus terminal can easily be reached by Skytrain. If you are confident enough to use the local bus system in Bangkok and don’t have too much baggage to carry, there are regular services which run to the various bus terminals from all points in Bangkok. Check the BMTA website for details of routes and prices.

Update: October 22, 2011
My thanks to reader Aarn who has provided the following information based on his personal experience of travelling between the northern bus station (Mo Chit) and southern bus station (Sai Tai):

There is an excellent minibus service for 35 Baht per person (pay for second ticket if you are carrying big bag/bicycle etc.) Departures are every 10-15 minutes with a journey time of approximately 30 minutes. The mini-buses leave from within 50 metres of where the long-distance buses drop-off their passengers. Travellers may have to ask around a bit for the minibus stand and will invariably be directed to a taxi (taxi price approx. 200 Baht compared to 35 Baht on mini-bus).

Aarn also suggests there is probably a similar minibus service between Mo Chit/Sai Tai and the eastern bus terminal at Ekamai. So, if you intend to travel between bus stations and want to save money on a taxi it is worth looking around for the mini-bus service.